Upload your CAD files for an instant quote and get custom parts shipped to your door in as fast as 1 day, sometimes faster.

Get an Instant Quote

Xometry is an industry-leading 3D printing service. Whether you need prototypes or production parts, we can make them for you in as fast as a day. We are your one-stop shop for high quality custom 3D printed parts at a low cost.

We use the latest additive manufacturing processes to build affordable, functional prototypes & parts in over 60 metals and plastics. You can explore our materials in our materials photo gallery.

Find the 3D Printing Process That's Right for You

Xometry's online 3D printing service offers six 3D printing processes so whether you are making prototypes or high-definition production parts, you can find one that meets your needs. 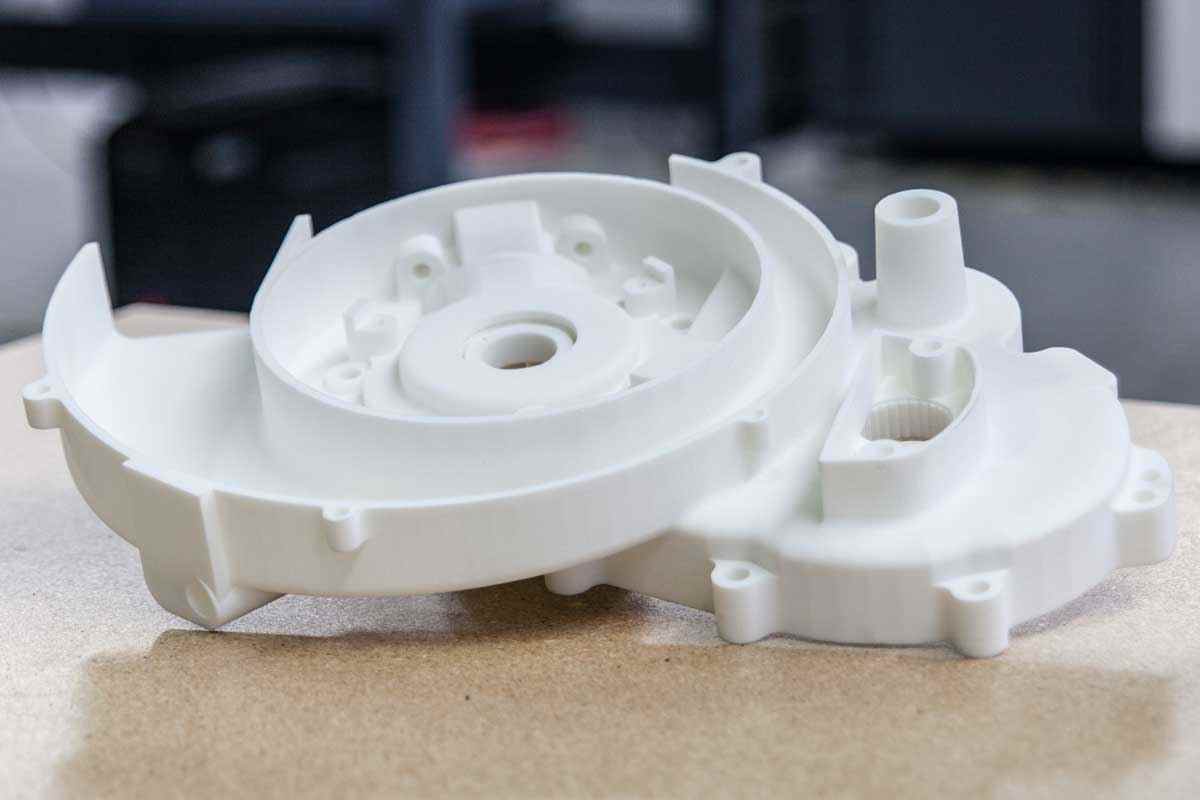 Selective Laser Sintering (SLS) is a powerful 3D printing technology that produces highly accurate and durable parts that are capable of being used directly in end-use, low-volume production, or for rapid prototyping.

An additive manufacturing layer technology, SLS involves the use of a high power laser (for example, a carbon dioxide laser) to fuse small particles of plastic powders into a mass that has a desired three-dimensional shape. The laser selectively fuses powdered material by scanning cross-sections generated from a 3-D digital description of the part (for example from a CAD file or scan data) on the surface of a powder bed. After each cross-section is scanned, the powder bed is lowered by one layer thickness, a new layer of material is applied on top, and the process is repeated until the part is completed. 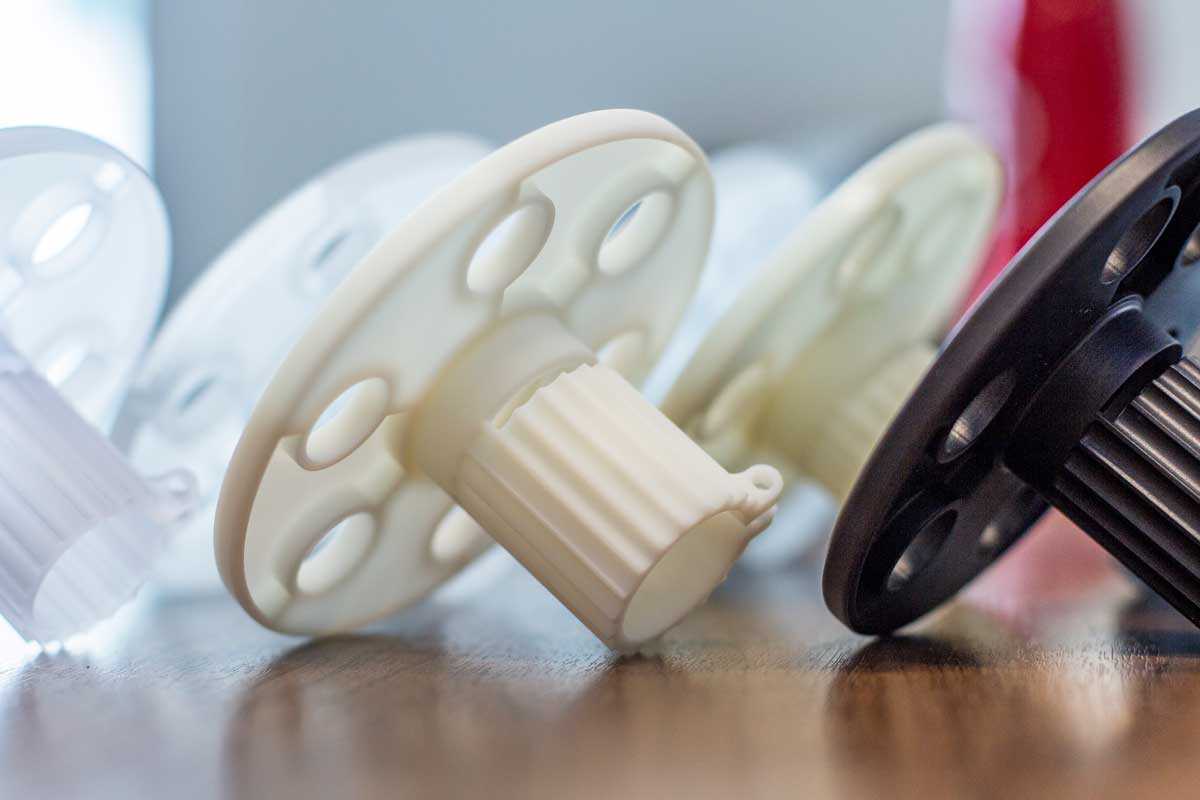 Stereolithography (SLA) is a robust 3D printing technology that produces extremely accurate and high resolution parts that are capable of being used directly in end-use, low-volume production, or for rapid prototyping.

SLA is an additive manufacturing process that focuses an ultraviolet (UV) light on a vat of photopolymer resin. It offers higher resolution printing than many other 3D printing technologies, allowing customers to print parts with fine details and surface finishes. SLA 3D printing is a highly-versatile platform for making custom parts in prototype and production settings; often acting as a stand-in for injection molded plastic parts.

Xometry offers both standard and high-resolution options for fine detail parts, and can also print larger sized parts and products, with some materials offering up to a 58" inch build area. In addition, Xometry's manufacturing partner network allows us to offer a larger variety of materials than other 3D printing companies - we offer a wide range of both Accura and Somos brand materials. 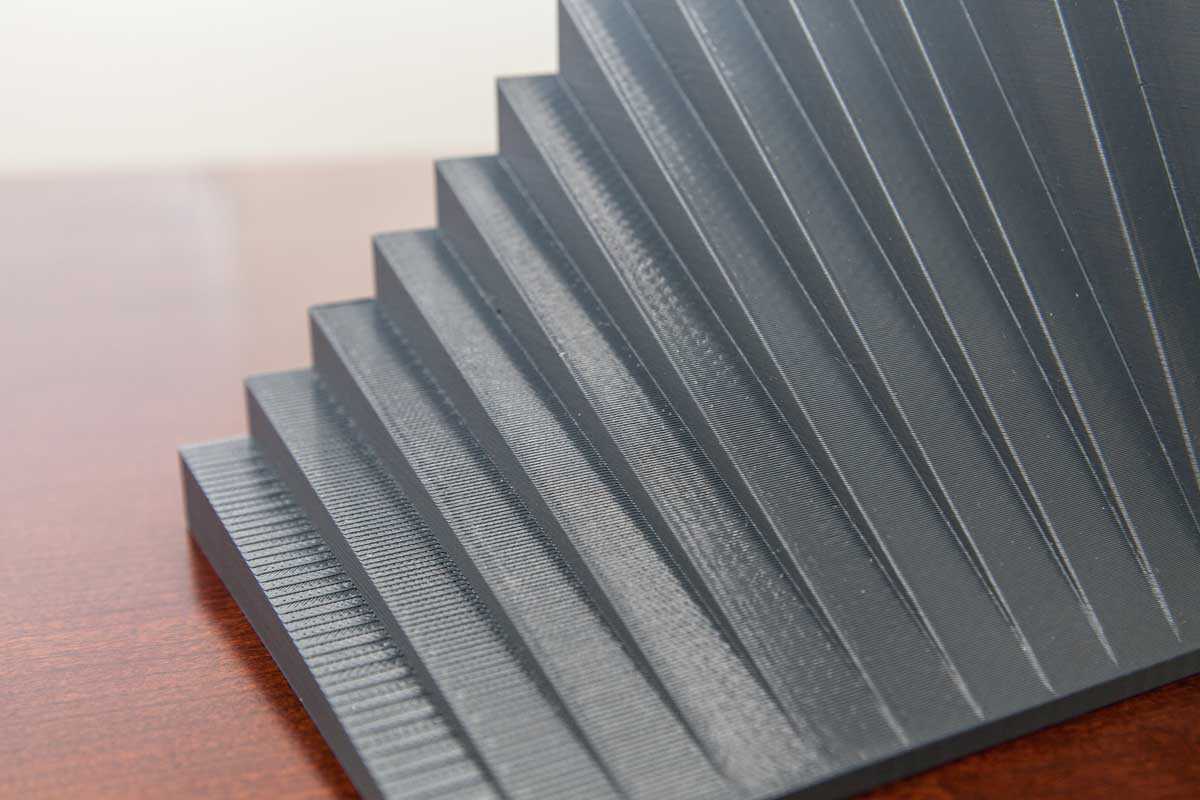 Fused Deposition Modeling (FDM) is a 3D printing technology widely known for its speed, accuracy, and competitive cost. A machine precisely extrudes melted plastic filament to create a part. Parts are very rigid, especially compared to Selective Laser Sintering (SLS), which makes them a great fit for projects with a rigidity requirement. Xometry's FDM solution offers large build volumes up to 24″ x 36″ x 36″, a variety of colors, and a diverse selection of production-grade thermoplastics — from ABS to Polycarbonate to Ultem. 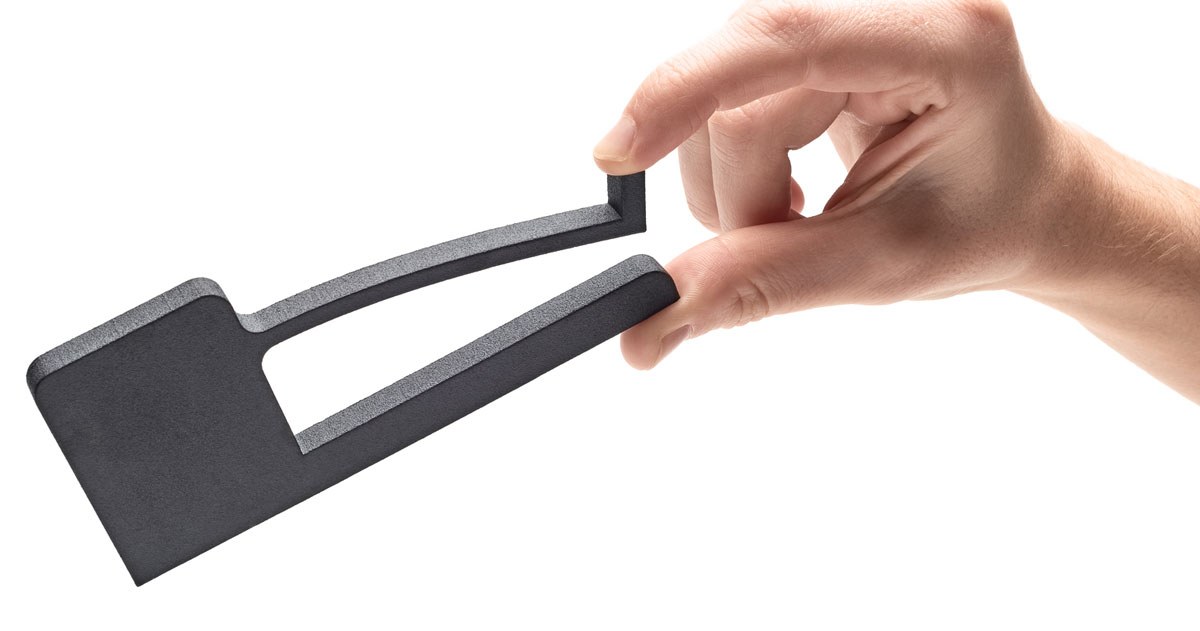 HP Multi Jet Fusion is a new 3D printing technology that produces highly accurate and durable parts that are capable of being used directly in end-use, low-volume production, or for rapid prototyping. Since the process uses well-established 2D printing ink-jetting, it has remarkably fast layer times compared to other powder bed fusion technologies. 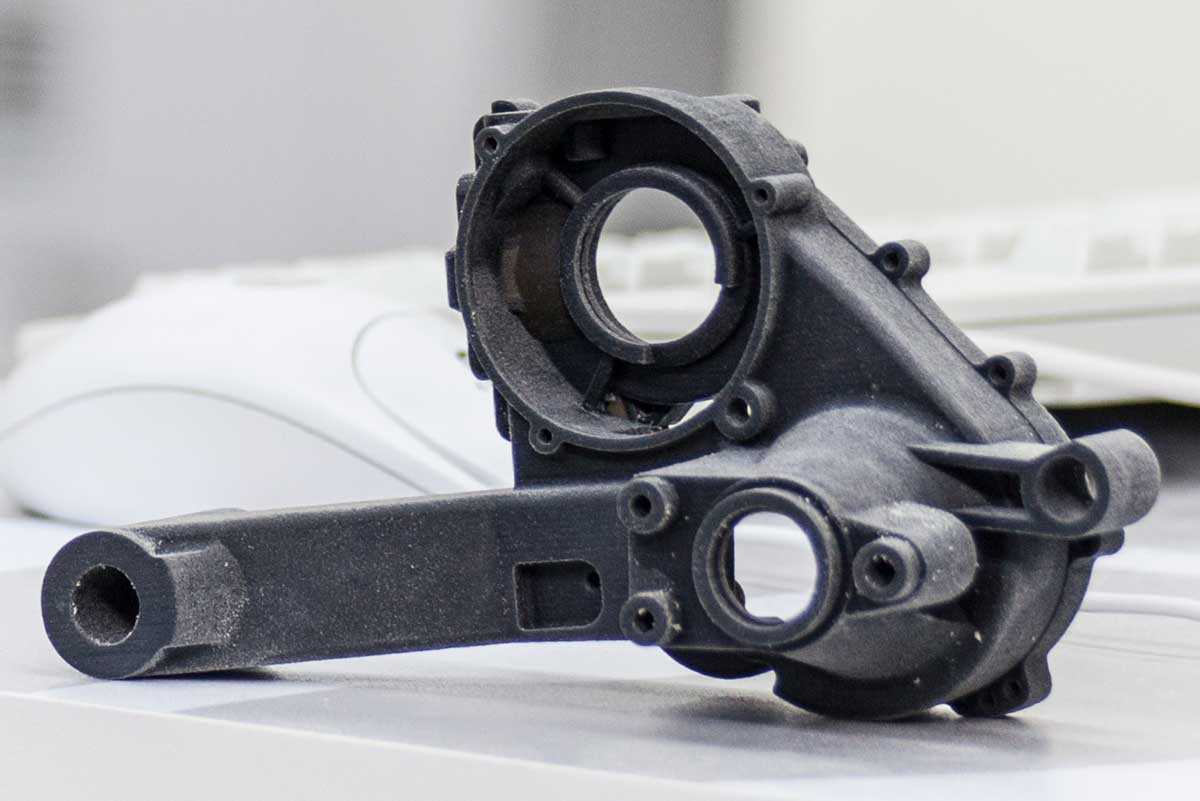 PolyJet 3D is a 3D printing technology known for its customizable material properties and excellent surface finish. It works by jetting UV curable resin onto a build tray in a process that is somewhat similar to inkjet printing. PolyJet 3D printing offers one of the most advanced industrial 3D printing solutions available, producing parts with incredible precision and speed. It also supports a wide variety of build materials including rigid and rubber-like plastics. Xometry's PolyJet solution has a maximum build envelope of 19.3 × 15.4 × 7.9 in. (490 × 390 × 200 mm) in a variety of colors and materials. 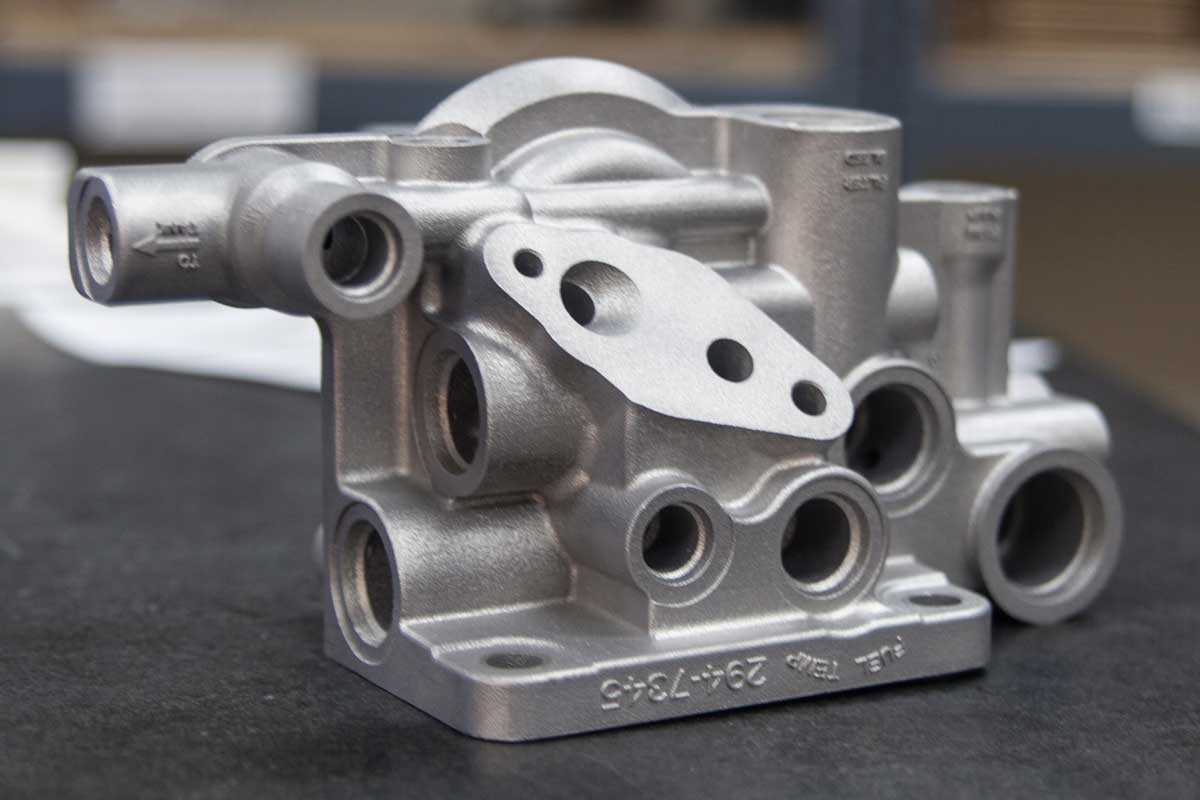 Direct Metal Laser Sintering (DMLS) is an 3D metal printing technology that builds prototype and production metal parts from a CAD file using a laser to selectively fuse a fine metal powder in either stainless steel or aluminum materials. A DMLS machine is capable of producing highly complex features and all-in-one assemblies using metal materials that would be difficult to achieve with subtractive manufacturing techniques.

Our DMLS metal 3D printing service typically offers build volumes up to 250 x 250 x 325 mm, but we may be able to accommodate larger part volumes upon request in the quote. (See our Manufacturing Standards for more details) A good first step is to find out the cost of the parts you need using DMLS and compare them to other 3D printing processes and CNC machining.

Parts can typically be shipped in as little as 1 day, allowing for faster design iterations and speed to market.

Geometries can be built more easily due to the 3D printing process, adding complexity without additional cost.

With 3D printing, you can make a single part or component as easily as dozens of production pieces. 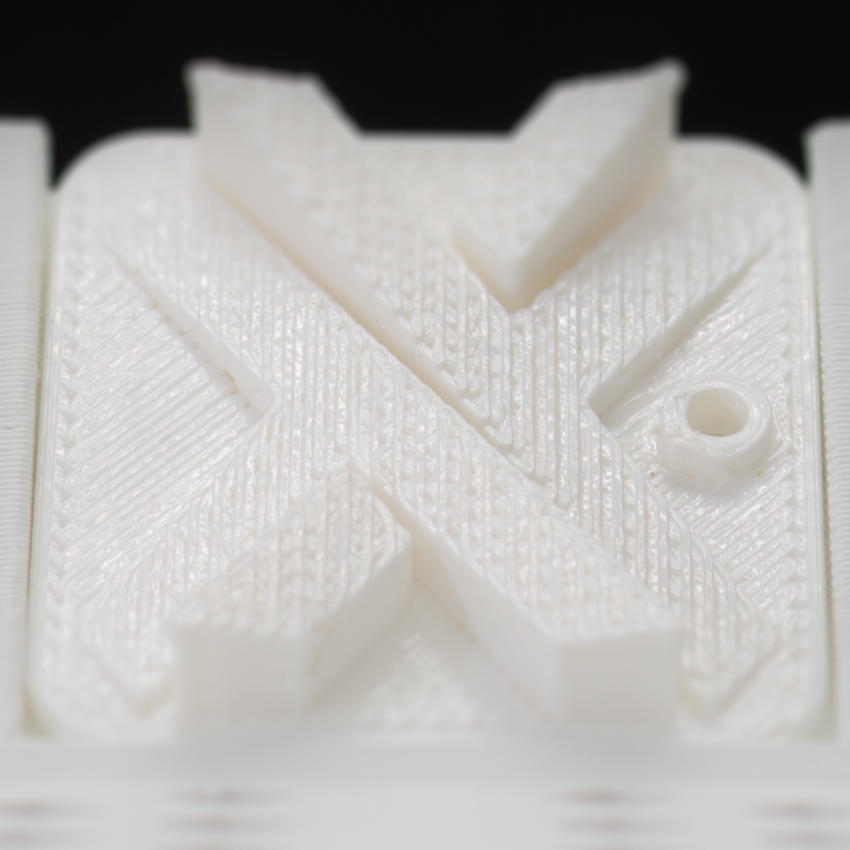 Get an instant quote or learn more about rigid plastics. 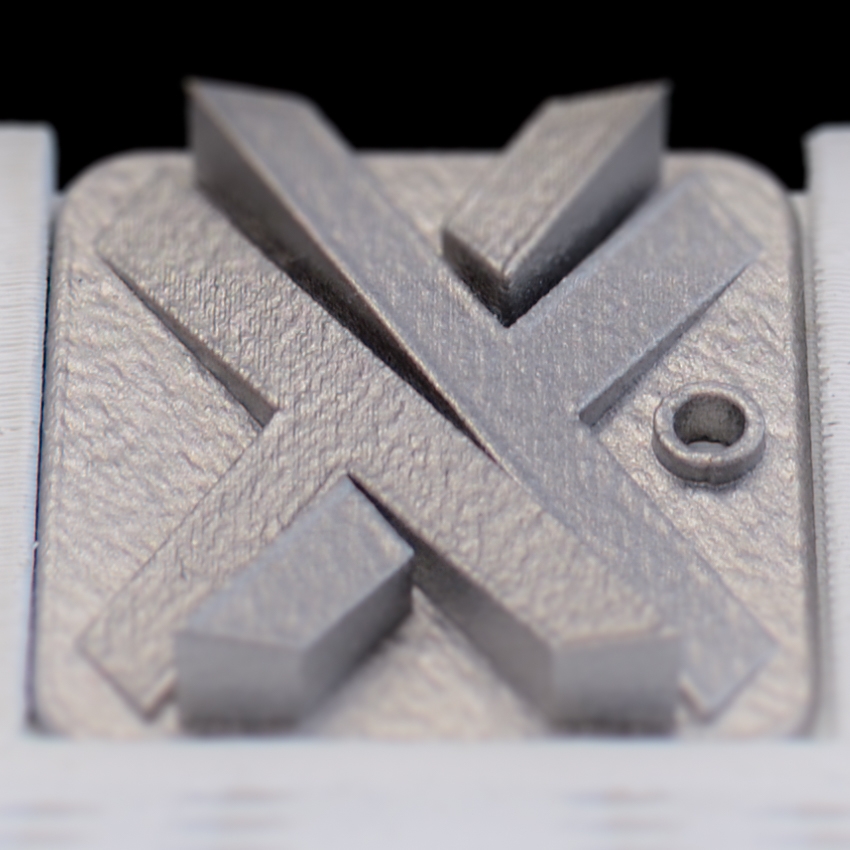 Get an instant quote or learn more about aluminum. 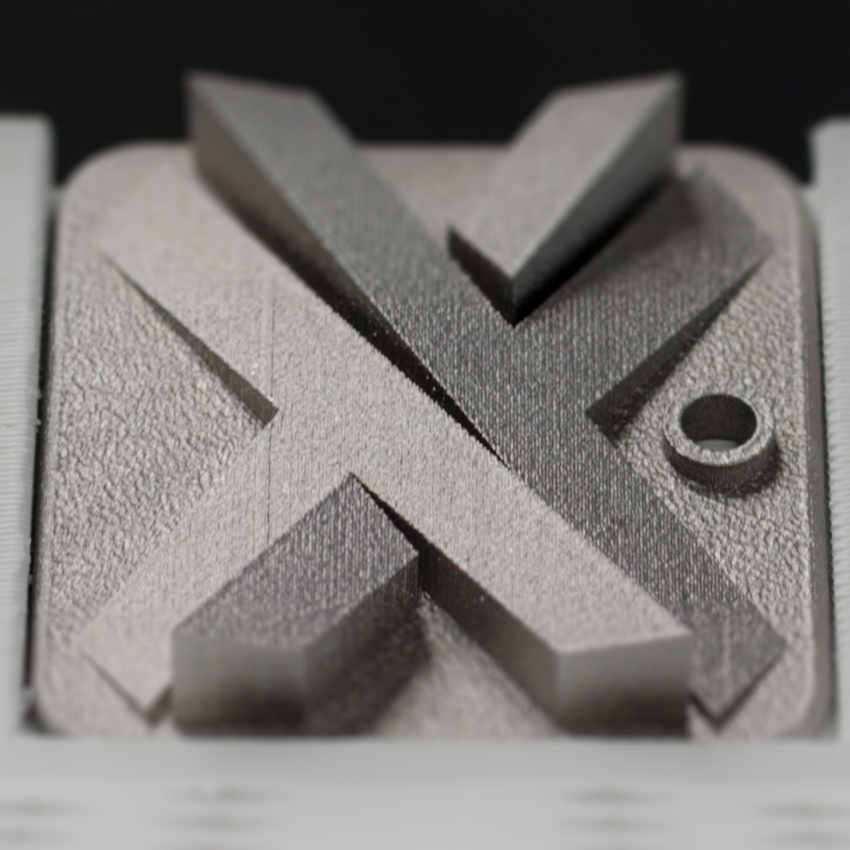 Get an instant quote or learn more about steel. 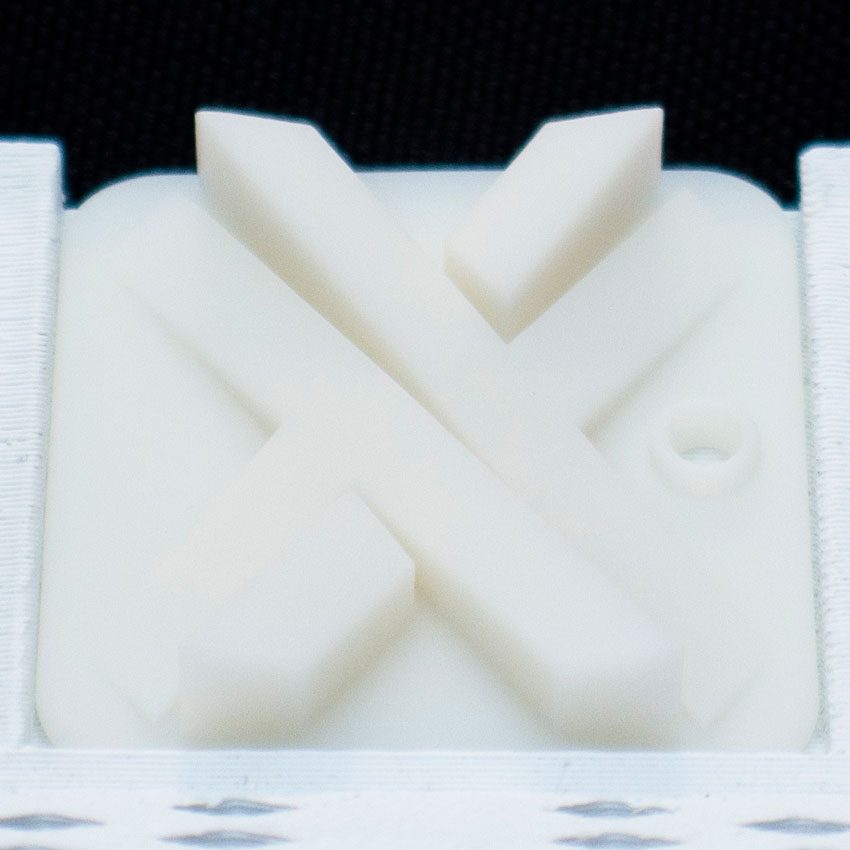 Get an instant quote or learn more about flexible plastics. 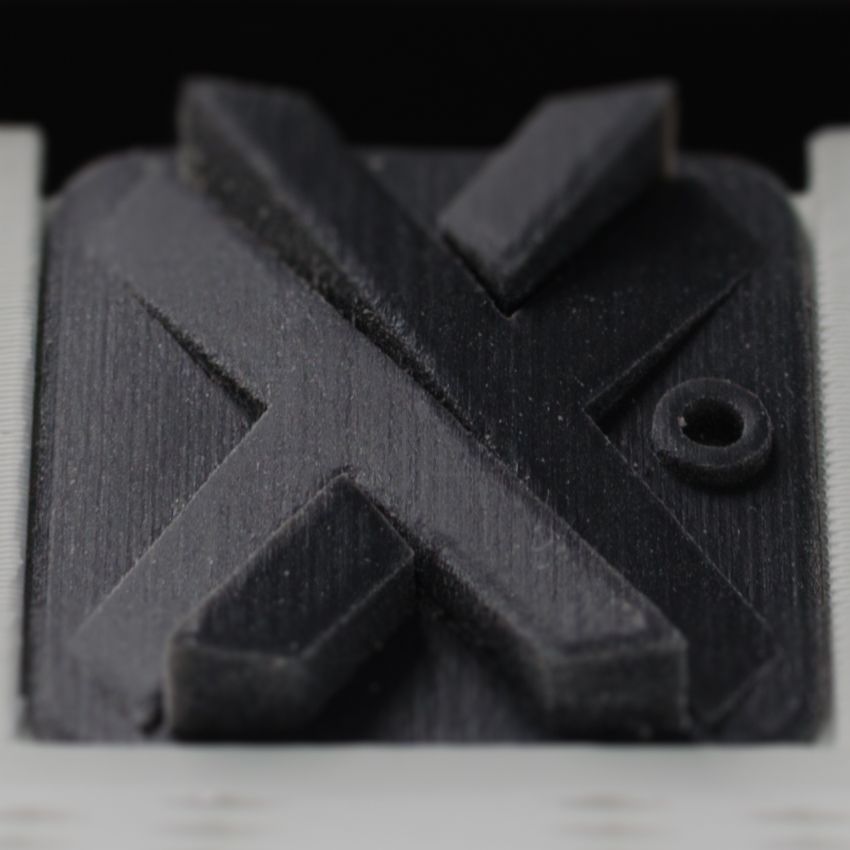 Get an instant quote or learn more about rubber-like plastics. 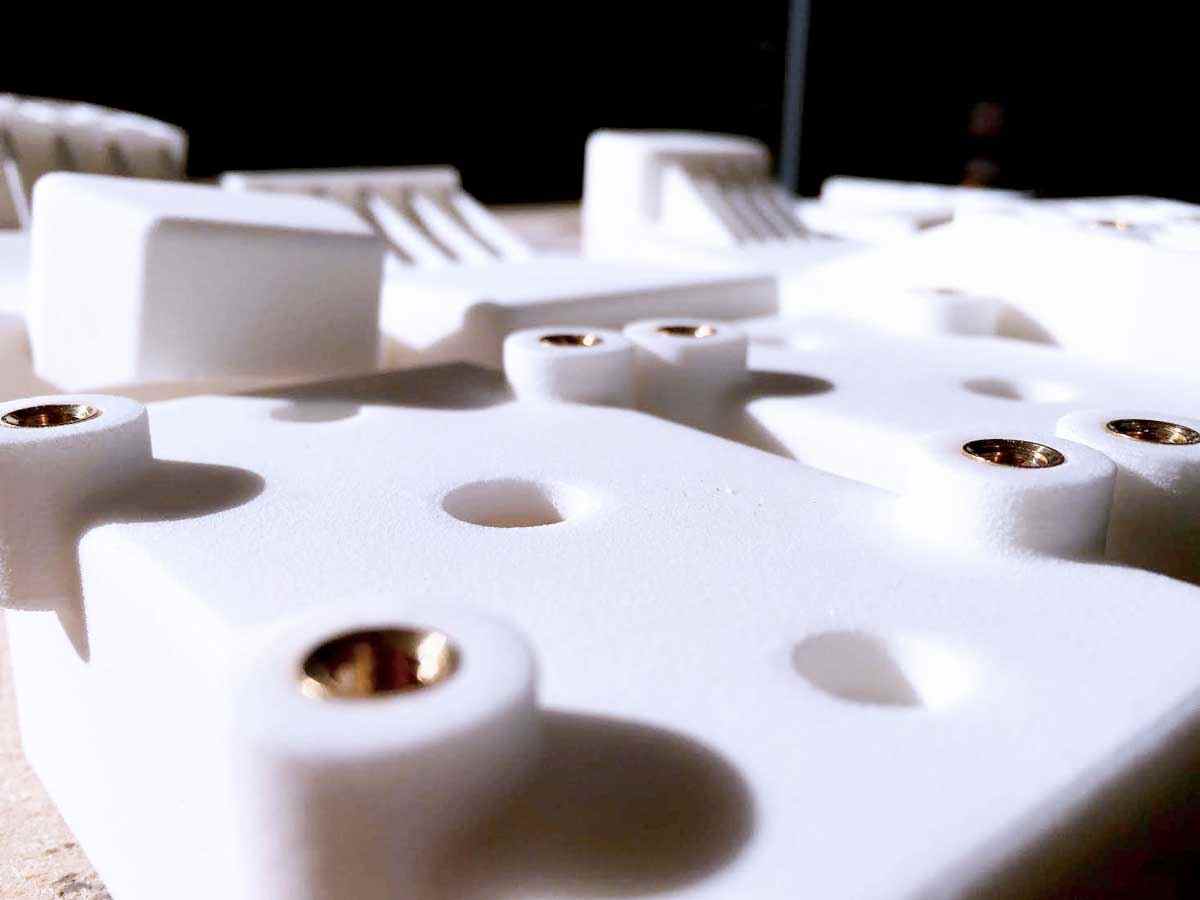 SLS parts are de-powdered with a sand blasting process, followed by detailed manual de-powdering for more complex geometries. These parts are left with a surface finish comparable to a sugar cube. 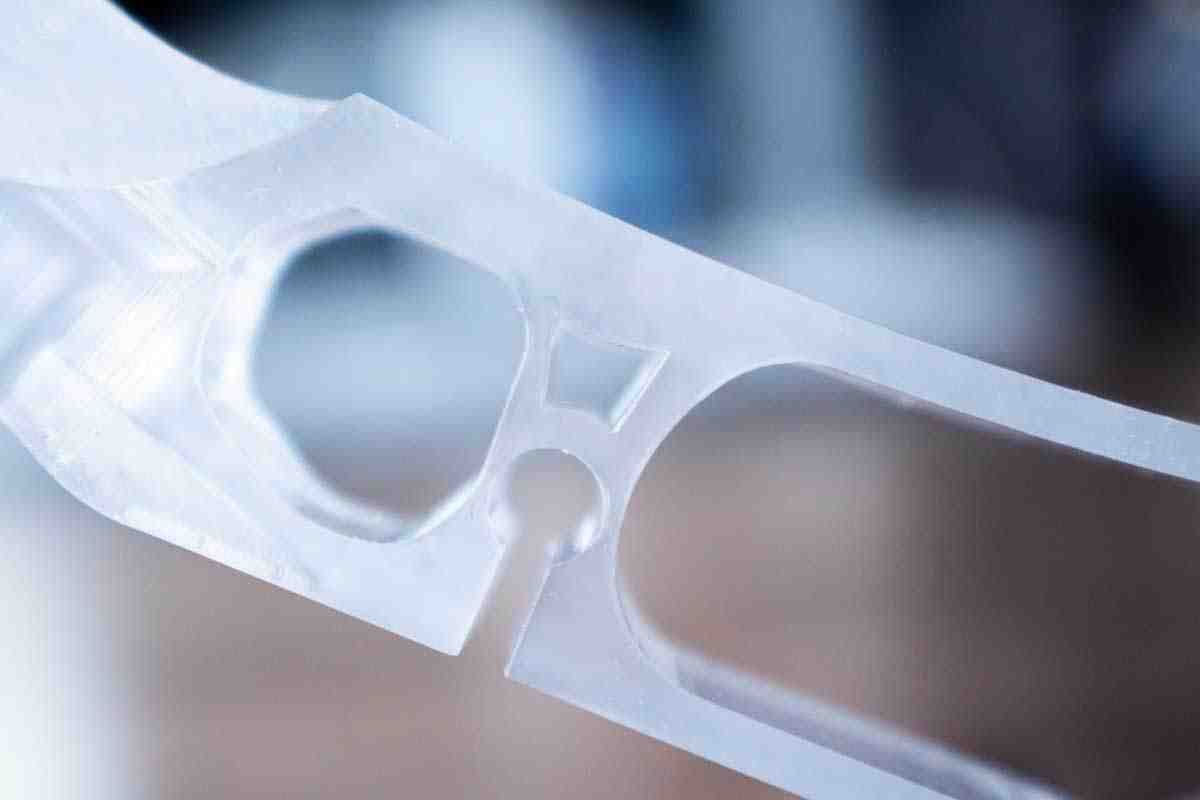 Parts go through the standard de-powdering process and are then media tumbled for several hours. These parts will have reduced grow lines and sharp edges may be softened by the tumbling process. The parts are left with an eggshell finish. 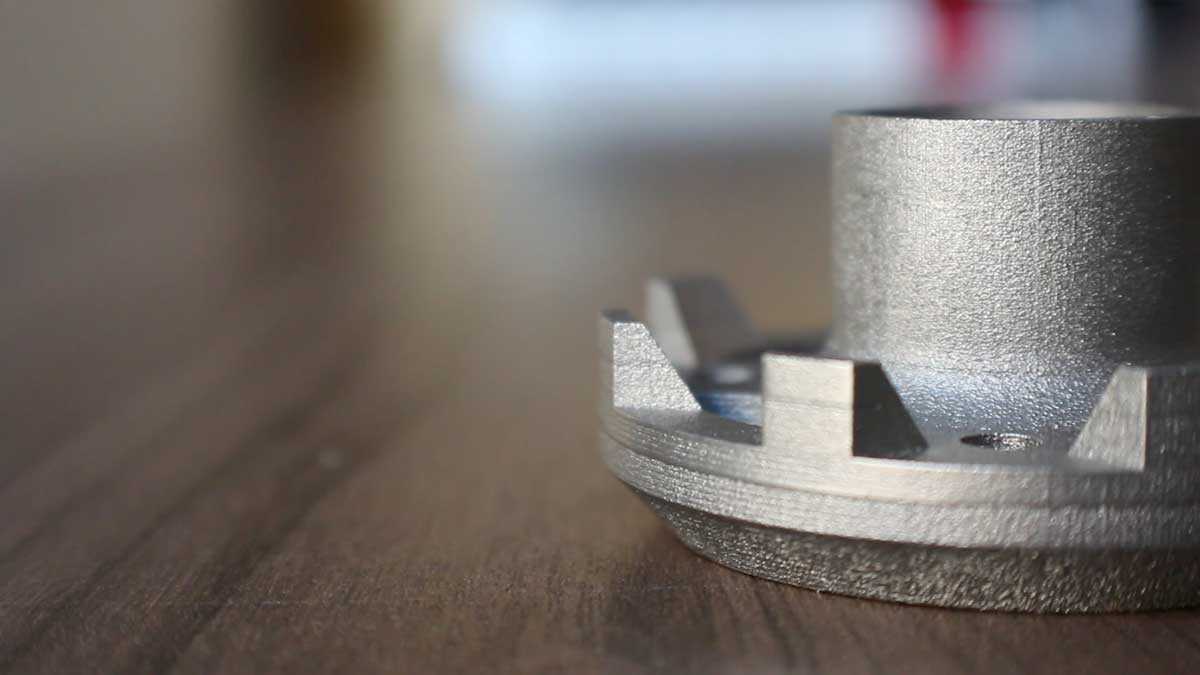 Xometry provides additional SLS, SLA, Multi Jet Fusion & FDM finishing options, including but not limited to: color dyeing, sanding, painting and plating to meet your needs. For examples of our additional finishes, please refer to our photo gallery.

The speed and versatility of 3D Printing lets product developers create physical snapshots of their designs through the iterative process.

3D Printing can be used to create fully-functional prototypes, complete with moving parts, as well as all-in-one assemblies.

The high accuracy and consistency of 3D Printing makes it an ideal way to build large quantities of discrete or customized parts.

Get an Instant Quote

Overview: What is 3D Printing?

A Brief History of 3D Printing

Additive manufacturing, also called 3D Printing, began in earnest in the early 1980s. The first patent application for an additive rapid prototyping technology was filed by Dr. Hideo Kodama in Japan in 1980, though he did not receive a patent due to his failure to submit the full patent specification within one year.

In July of 1984, a group of French inventors filed a patent for stereolithography (SLA) 3D printing - a process in which layers are added to a part curing photopolymers with ultraviolet light lasers. The French patent was later abandoned due to Three weeks later, Chuck Hull, an American working who later founded 3D Systems, filed his own patent for SLA. Hull also invented the STL file format.

In the late ‘80s 3D printing took another step forward. In 1987, Carl Deckard of the University of Texas filed a patent for Selective Laser Sintering; his application was granted in 1989.

Next, S. Scott Crump, the founder of Stratasys, developed fused deposition modeling (FDM) in 1988. Stratasys was granted the patent in 1992 and soon after would launch one of the first commercially successful FDM machines. In addition, EOS, another prominent 3D printer company, was founded by Hans Langer in 1989.

Through the ‘90s and early 2000s, new technologies continued to be introduced, thought most were focused on expensive industrial applications. Companies like Solidscape, ZCorporation and Arcam were launched during this period and the selective laser melting (SLM) process was developed during this time. The market for both high-end printers and more prototyping-focused, less expensive machines both grew in this era.

It took years - until 2009 - that the first widely available commercial 3D printers went on sale. It was also about this time that the first commercial 3d printing services began to appear. Since this time, both industrial and personal 3D machines have improved in quality and gotten less expensive. In 2013, two NASA employees Samantha Snabes and Matthew Fiedler launched their large-format, affordable 3D printer, Gigabot and a new company called re:3D. Since then, 3D printers have become even more accessible.

Industries that use 3D Printing 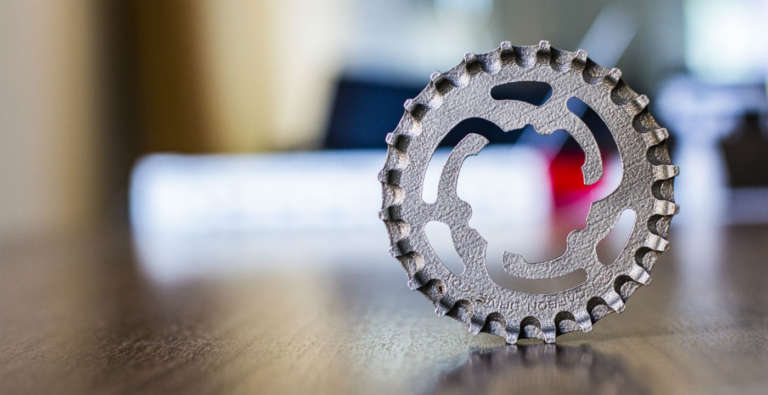 Choosing The Right Additive Manufacturing Process for Your Project

Learn the basics of our six manufacturing processes including how parts are made, mechanical properties, part limitations, tolerances, materials, finishes, and layer thickness, cost, and lead time. 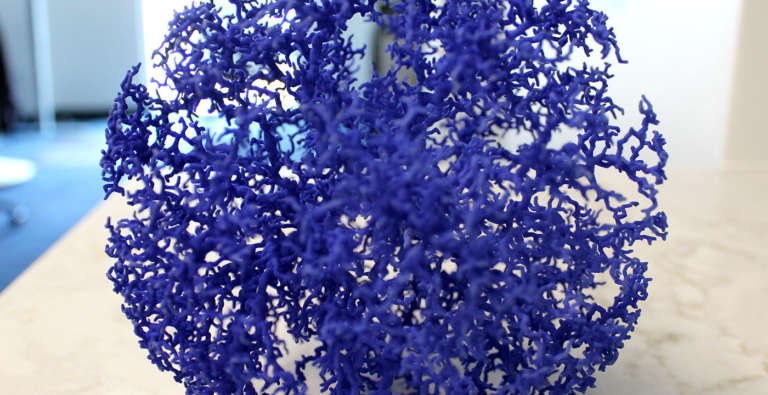 How to leverage the 3D printing complexity paradox. 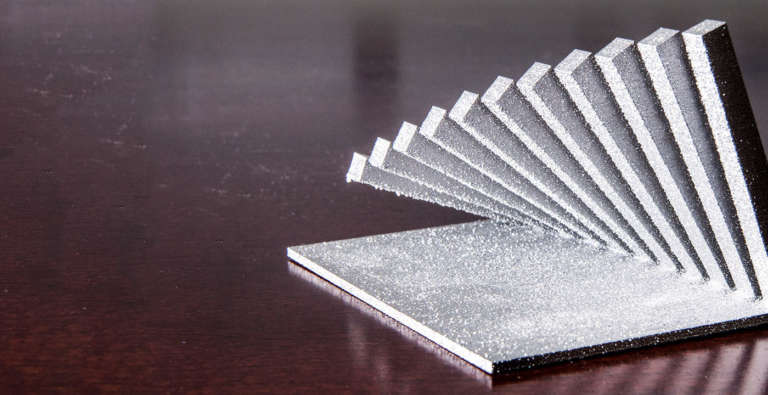 There are a handful of considerations to keep in mind when selecting 3D printing as your custom manufacturing process. 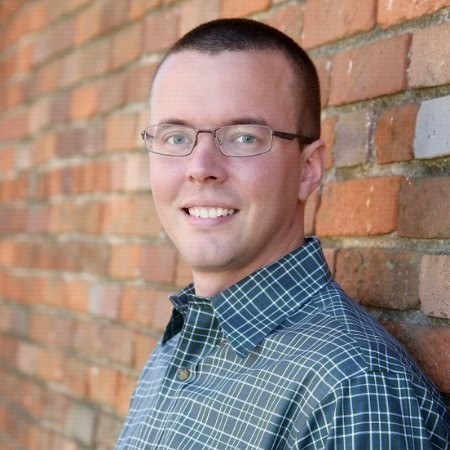 Tommy Lynch is the lead additive applications engineer at Xometry. He has over 14 years of experience in the industry. 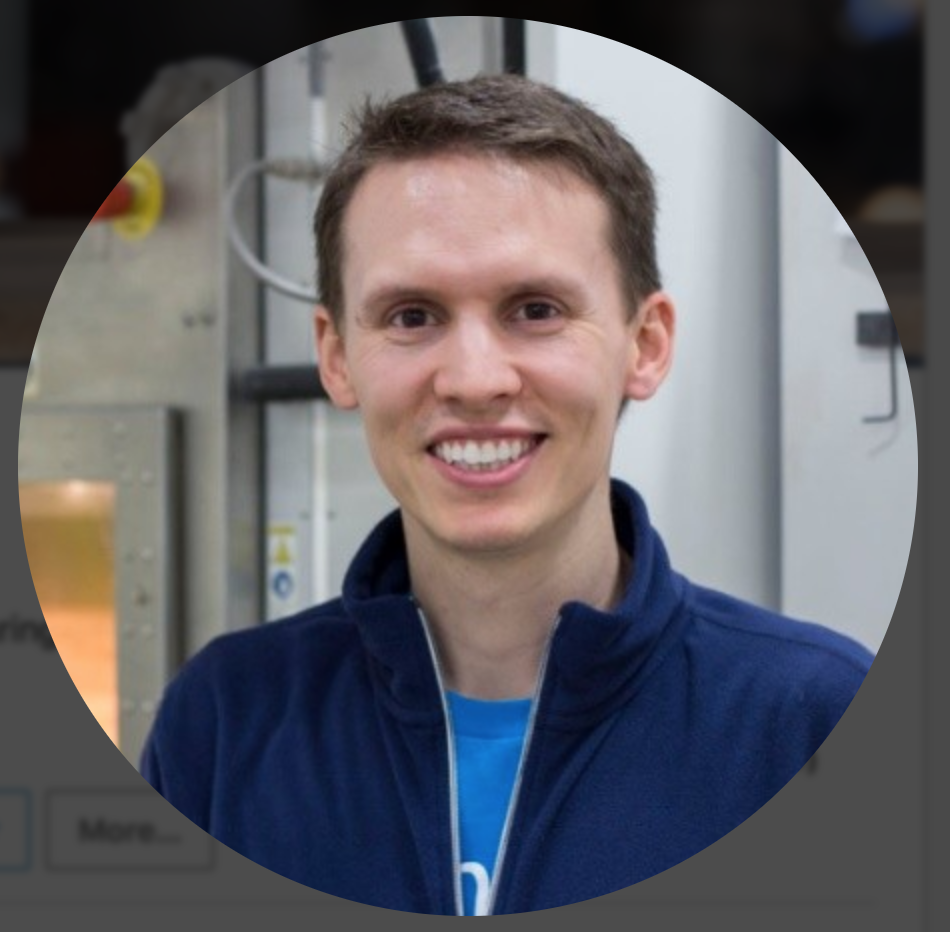 Greg Paulsen is Xometry's additive manufacturing guru and the star of many Xometry videos.

Learn more about our other capabilities

All uploads are secure and confidential. We are ITAR registered.