Case Study: you’re about to see this beer infuser in every bar

Kyle was, at the time, a junior at Rutgers University and majoring in political science. He chose the major with the idea that he’d one day be a lawyer, but he didn’t enjoy school, or going to class for that matter. On this particular day he was supposed to be taking an exam for his entrepreneurship class, but instead he found himself in his dorm room watching a TV documentary on craft beers. “I remember it had something to do with all the new craft breweries, but my memory is a little murky,” he said in an interview. “But there was something about the whole process of brewing, and as somebody who dabbled in carpentry and was always interested in the way things worked, I just knew I would really like doing it.”

Despite not really liking the taste of beer at the time (“Everybody in college has the room temperature Natural Light in a dirty basement at some point or another,” he explained) or even being old enough yet to legally buy it, Kyle got out his credit card right away and ordered a home brew kit. A few weeks later, he began assembling it in his father’s garage, first tinkering with it on weekends and then later dropping out of college to focus on it full time. And how did his dad feel about this procession of events? “Considering his son had just dropped out of school and was brewing underage in his garage on a system that was costing a couple of thousand bucks to build, he was surprisingly okay with it,” he said, laughing. “As I say it out loud, it sounds ridiculous.”

Rather than dipping his toes in the water and purchasing a small home brewing kit, Kyle built a large, intricate apparatus and started with one of the most challenging styles of beer one could brew: an IPA that had an alcohol volume above 18 percent. “It’s the equivalent of somebody saying, ‘I’m going to start exercising’ and then trying to run the Boston Marathon the next day,” he said. But he spent hours watching YouTube videos and reading articles on home brewing, and the first batch turned out to be “pretty good,” as he recalled. “If I didn’t have access to YouTube it probably would have turned out terrible.” 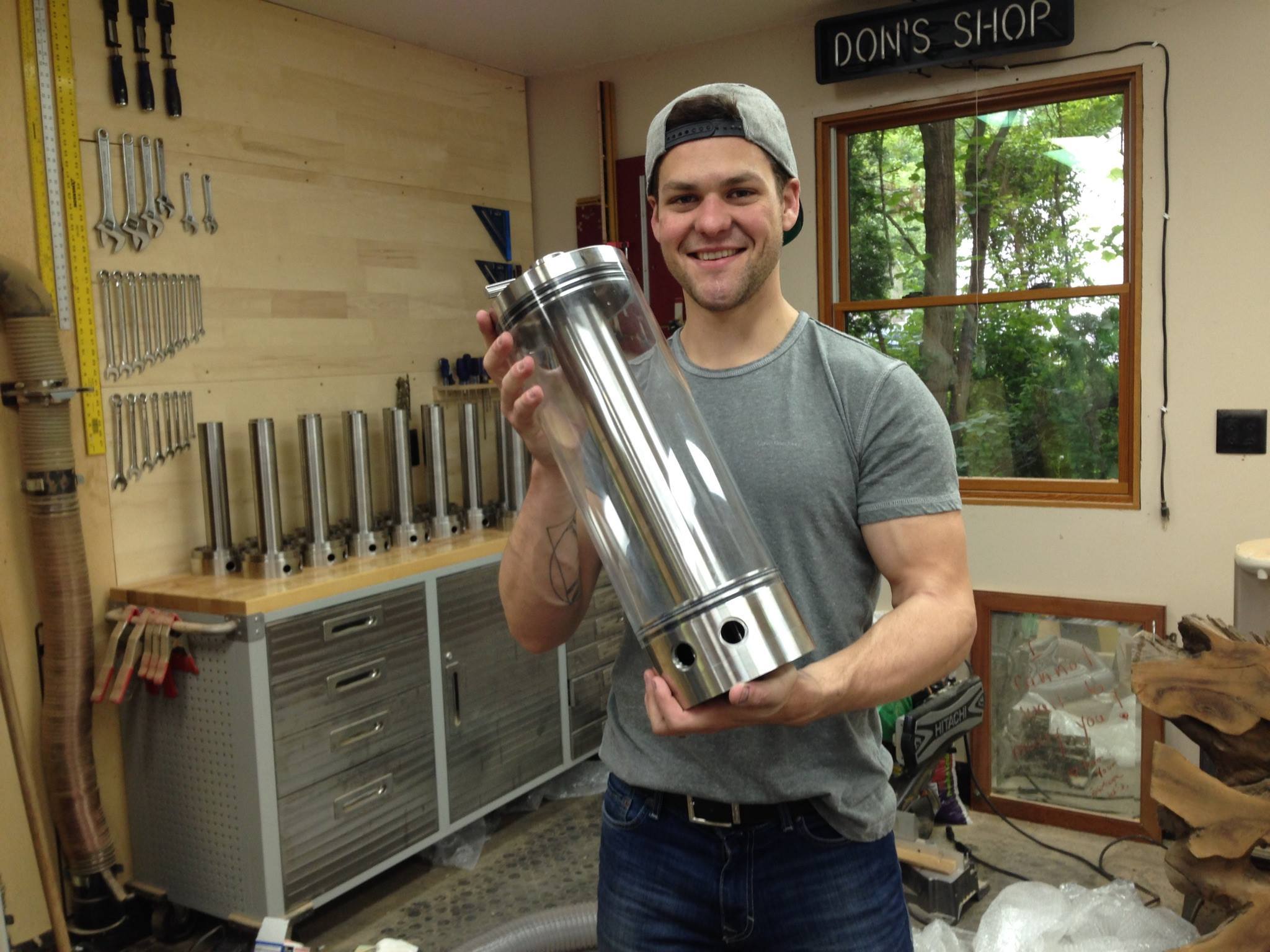 It wasn’t long before a hobby became an obsession. But even as Kyle perfected his brewing techniques, he still wanted more flavor in his beers. Many of his early attempts to add it in, however, were met with underwhelming results. “Take anything in your kitchen — an apple, spices — put it in a glass and pour beer into it. When you do that, the beer just puffs up into a ball of foam and it goes flat.” He began experimenting with adding flavor to his beer while using spare parts around his father’s garage.

It was while tinkering with this problem that Kyle developed his first rudimentary beer infuser. He realized that in order to prevent flatness, the flavor would need to be introduced immediately upon leaving the tap using a closed pressure system. “It was a nasty learning curve,” he said. “The first generation beer infuser was basically held together by duct tape and wire. My brother actually knew how to weld, and we had some of our dad’s old rusty tools lying around. It was literally a dirty garage and we’re cutting stuff up and welding and polishing and grinding, and by the end we had this hacked together prototype, just good enough for a proof of concept.” Though it didn’t look pretty, it only took a few sips of beer — he first chose to flavor it with additional hops — to make Kyle realize he was onto something revolutionary.

Kyle eventually named his product a Fusion Tower and went about trying to convince bars they should buy one. It wasn’t easy; one of the first bars he walked into kicked him out because he looked so young. But he was persistent and was eventually able to win over the manager at a local Whole Foods. “Whole Foods was my first customer, and probably to date my best customer, because these guys took a huge chance on me,” he said. “When we went in to install the first prototype, the manager came up to us and said, ‘’Well, see ya in the morning.’ They basically locked me, my wife, and my brother inside the Whole Foods bar overnight, and that was the first time that we actually installed a draft beer system from start to finish. It probably took us like 10 hours. That was a major, major milestone for the business.”

Being able to namedrop Whole Foods as a customer gave Kyle instant street cred, and he was soon able to get his Fusion Tower into more and more bars. But even as he racked up sales, he and his brother were still assembling each product by hand using off-the-shelf parts. This was when he started thinking about a second generation product. “We wanted to create something that was completely custom designed from the ground up with no off-the-shelf parts,” he said. “So we went to product design firms, we met with engineers and developers, and we shopped this thing around to a lot of companies, but they all came back with relatively large price tags.”

Never one to shy away from a challenge, Kyle decided he would learn how to create a custom design himself. He purchased a high end computer, obtained a copy of the SOLIDWORKS design software, and, just as he had done with the original home brew kit, fired up YouTube videos and how-to articles. “I was actually able to start designing parts within a few days,” he said. “I mean, they weren’t beautiful, but the important thing was that I actually had taken the next step.” Using Xometry’s CNC solutions, he began to produce prototype after prototype. “I was like, ‘Wow, this is really easy,’” he said of Xometry’s platform. “These design questions that once literally took me weeks to figure out, I could now do within a single day.”

This vastly accelerated his design process, allowing him to rapidly move through several prototypes. What some would consider perfectionist overkill, he deemed necessary. “I’ll be the first to admit that I intentionally over-build things,” he said. “I’m very much obsessed with the finishes, the weight; I like the parts to be seamless. I will sit in front of the computer for hours and obsess over the little details, because in the end when I’m holding that infuser in my hand, I want it to feel exactly how I wanted it to and have the knowledge that I didn’t have to make any compromises along the way.”

By early 2015, Kyle had reached a point when he felt satisfied with the beer infuser’s design. Almost immediately, he turned to adding yet another skillset to his toolbox: patent writing. “Originally I wanted to be an attorney, so being able to put your mind into a very mechanical mode and then switching over to patent work, which is more abstract, was actually an awesome opportunity for me.” Once he was sure he could claim his product was truly proprietary, he then set about unleashing it to the world.

Up until 2016, demand for the Fusion Tower was outstripping supply purely from word of mouth. Usually, a bar owner would spot the beer infuser in another bar, ask who had created it, and then reach out to Kyle wanting to purchase one for their own bar. But this year and into 2017, Kyle is focused on the bigger picture. “As it’s really become something that looks like a commercial product, we get people from all over the world — Dubai, Singapore, Japan, China, and Europe — and they are like, ‘Hey we want to be a distributor for this,’ or, ‘Hey, there’s a big opportunity for this in our country, can we license your patent and make these things here?’” He said that his team will make announcements in the coming months about some major partnerships his company has formed. “The business has become a little bit more than just selling Fusion Towers.”

Kyle’s company, now in its sixth year, is more successful than he ever imagined it would be. And all because he happened to skip class one day and turn on his television. “It was me sitting down at that couch at that time of day when that documentary was on,” he said, laughing. “If I hadn’t done that, I would not be doing what I’m doing today.”

BMW tooling engineers can use Xometry’s CNC machining, 3D printing, and urethane casting for custom assembly fixtures, which allows the company to put the finishing touches on its vehicles quickly and cost-effectively.