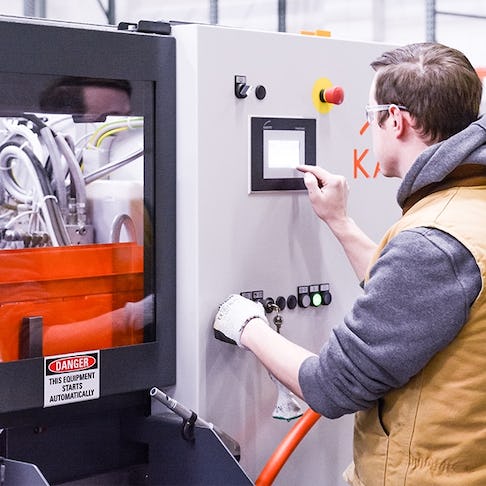 Xometry’s Q4 2018 Small Manufacturing Index finds manufacturers are optimistic about the market in the near future with respondents expecting mild to strong increases in business through early 2019.

Gaithersburg, MD., February 28, 2019 — Xometry, the nation’s largest on-demand manufacturing platform, released the findings of its quarterly Small Manufacturing Index, showing that 43% of small- to mid-sized manufacturers surveyed are likely to hire more employees in 2019 as business confidence remains steady compared to last quarter. Xometry’s manufacturing partners are even more likely to hire new employees with 48% reporting they expect to hire in 2019 compared to 38% of external respondents. Additionally, 32% of those surveyed stated they increased hiring since Q4 2017.

The majority of small- to mid-sized manufacturers in the U.S. are as equally optimistic about the market in the near future as they were a year ago. Sixty percent of the manufacturers surveyed said that their business would either mildly or strongly increase this quarter compared to the same time last year. Xometry’s manufacturing partners are even more optimistic with 64% of those surveyed expecting an increase in business throughout early 2019 compared to only 57% of external respondents.

"We're pleased to see the continued growth in confidence and hiring among small manufacturers," said Laurence Zuriff, Xometry co-founder and CFO. "We're particularly happy to see that our manufacturing partners are reporting above average confidence toward their hiring plans."

Xometry is driving the business of American manufacturing through a proprietary software platform that offers on-demand manufacturing to a diverse customer base, ranging from startups to Fortune 100 companies. It provides product designers and engineers the most efficient way to source high-quality custom parts, with 24/7 access to instant pricing, expected lead time and manufacturability feedback. Our nationwide network of over 2,500 manufacturing partners enables us to maintain consistently fast lead times while offering a broad array of capabilities, including CNC Machining, 3D Printing, Sheet Metal Fabrication, Injection Molding, and Urethane Casting. Xometry has over 14,000 customers, including BMW, General Electric and NASA.

About the Small Manufacturing Index