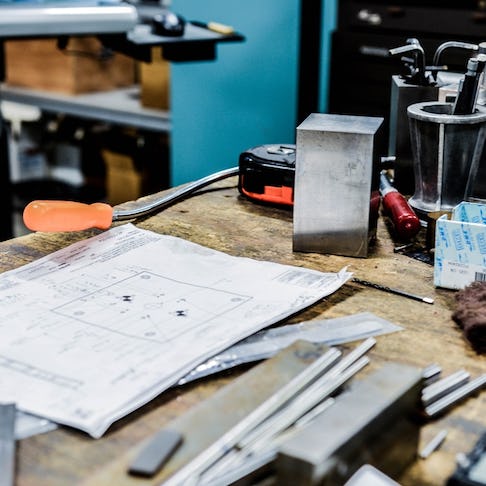 Getting consistently high-quality parts shouldn’t be a roll of the dice. it’s why we practice strict quality control measures both in-house — with everything from our Dev teams to our Fulfillment team — and across our manufacturing network.

Quality, as an idea and measure, is a bit of a moving target. What it means depends on factors as wide-ranging as who you talk to when, what you’re referencing and why, as well as whether or not an actual agreed-upon standard is in play. In some contexts, quality has little more to define it than, “I know it when I see it.”

Manufacturing begs to differ. While a CNC machined part can embody a certain je ne sais quoi, nobody is designing a part or machining it to achieve some unnameable but pleasant aesthetic appeal. CNC machining and manufacturing may produce parts that are things of beauty, but such accomplishments are gravy, not the goal.

Quality is never an accident. It is always the result of intelligent effort.

In the world of manufacturing, “quality” is specific, deliberate, measurable and repeatable. It’s also always on a quest to improve itself. Parts are at quality when they meet an established set of requirements so they can be delivered to the customer free of defects, deficiencies or significant variation from one another — end of story.

Of course, pulling that off is a story in and of itself.

When one of Frank Lloyd Wright’s clients called to complain that his roof leaked onto his dining room table, Wright said, “Move the table.” To him, the house he’d designed and built was in the right, leaky roof or no. It was the table that was wrong.

The client, understandably, felt differently. Most people have been collectively operating from a set of standards about dwelling places — and roofs — for centuries. Frank Lloyd Wright knew of these standards, of course, but they weren’t the ones he was seeking to meet. He had his own. This lack of a shared reference point is what led to disagreement and disappointment.

In manufacturing as a whole, the notion of quality is no different. Instead of existing in a vacuum, quality is relative to agreed-upon standards as defined in a 2D drawing, a 3D model and a sound, DFM philosophy. When something aligns with the standards that have been set, it can be said that it’s at quality. If the characteristics of a part meet all the criteria established for it, the part is said to be of high quality. If a part’s characteristics match few of the established standards or none, it’s said to possess a quality that is low.

Quality, then, isn’t just relative to an agreed-upon set of standards; it’s also something that’s measured on a sliding scale. Still, none of that seeming loosy-goosiness has anything to do with luck or being loose. As John Ruskin, in the above quote makes clear, quality isn’t something arrived at by accident. It’s the result of intelligent effort, and that intelligent effort must be practiced, practiced, practiced and practiced.

Quality Is A Habit In A Quality Culture

There’s a saying in the worlds of performance and athletics that has a close correlation to the quality aims found in the best manufacturing endeavors in the world: Practice doesn’t make perfect. Perfect practice makes perfect.

Quality isn’t a spin of the roulette wheel with us. It’s a practice, a habit, a goal and a mantra ...

It’s an adage that assumes a strict measure is in place every time a task is performed so that, over time, the performance of that task itself takes on a high quality, which in turn, makes the task a better and better candidate to more consistently yield parts of high-quality. Within CNC machining and other forms of manufacturing, however, perfect practice isn’t just the goal. It’s also the starting point, as well as each task’s measure. It encompasses processes, practices, parts, and products, and if it isn’t a part of a company’s or shop’s culture, no amount of measuring and tracking can pull it off.

From TPS and lean to Continuous Improvement and Six Sigma, the importance of culture to quality in a manufacturing environment has been stressed for some time now. More than a following of rules and a checking off of boxes, though, the pursuit of quality is itself a practice and a habit of pursuing quality, and it’s best supported by a culture that embodies and assumes the same.

Here at Xometry, we know the ease and speed of getting online to get your parts is only going to actually improve your business if the parts you receive are at the quality you need. It’s why we practice strict quality control measures both in-house — with everything from our Dev teams to our Fulfillment team — and across our manufacturing network.

Getting consistently high-quality parts shouldn’t be a roll of the dice. When we get emails from customers like this one, “Whoever machined that part killed it, and overall exceeded our expectations. Everyone who’s seen it in person so far has commented on the high quality…” it means our commitment to intelligent effort is paying off.

With a true quality control program in place, getting CNC machined parts at a high quality all the time is more than possible. While far from an exact science — every new part is a new part after all — the culture in place here at Xometry and in our qualified supply base is trustworthy. Tomorrow, in our pursuit of a better perfection, we’ll be trustworthier still.