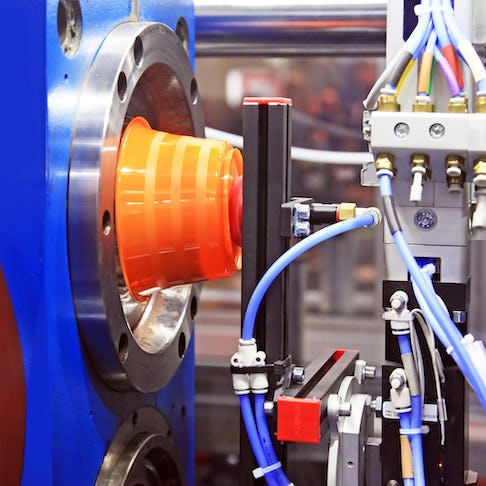 What is Plastic Injection Molding?

How Does Plastic Injection Molding Work?

Plastic pellets are fed into the injection unit using a hopper. These pellets fall into a heated barrel which melts the plastic. A screw conveyor moves the plastic through the barrel and also serves to mix it for even heating. In addition to this, modern screws have tapered shapes that force pellets against the side of the barrel to add additional frictional heat. A significant proportion of the heating is achieved through this friction effect and heater bands supply the remainder. Once a predetermined amount of plastic has been melted in front of the screw, it is pushed forward and forced into the mold.

The mold is effectively a negative of the product and typically consists of 2 or more separate parts. The plastic is injected into the mold’s open cavity, also known as the cavity image, where it solidifies and takes on the shape of the part. Air is allowed to escape through vents machined into the mold. This solidification process can be accelerated using strategically placed cooling channels to cool the mold quicker. The part is then ejected from the mold using ejector pins. The location of these ejector pins can be seen on injection-molded parts as circular indentations. They are often placed on a less visible side of the plastic part. Depending on the complexity of the part being manufactured, molds can be extremely expensive.

Plastic injection molding is done at extremely high pressures. As such, when plastic is forced in, the pressure will try to separate the two halves of the mold. To stop this from happening, the halves of the mold must be clamped tightly together. The clamping pressure is typically supplied by a hydraulic ram.

Part designs for plastic injection molding need to follow some basic DFM (Design for Manufacturing) guidelines. These guidelines ensure that injection-molded parts can be easily manufactured with as few defects as possible. Molds are manufactured to very strict tolerances so if the part was poorly designed at the outset, that expensive mold may need to get re-machined before it can be used. Any rework results in significant costs. Some typical DFM guidelines cover the following aspects:

Molds consist of at least two sections. They also contain cooling channels that are close enough to the surface of the mold to be able to quickly cool the part. In addition to cooling channels, air release vents need to be machined on the face of the mold to allow air to escape during the injection process. These vents must be extremely narrow so as to allow air to escape but no plastic.

Typical thermoplastics used in plastic injection molding are listed below:

Plastic injection molding has become the preferred method to manufacture many different plastic parts. This is due to its long list of benefits, such as:

Should I use Plastic Injection Molding for my Parts?

Injection-molded parts have many advantages and as such can have a positive impact on a product’s functionality and cost. However, parts that are not designed according to standard DFM principles can dramatically increase the cost of the mold and may affect the profitability of the whole production. To learn how best to optimize a part for injection molding download the Xometry injection molding design guide or consult a Xometry expert for more details.