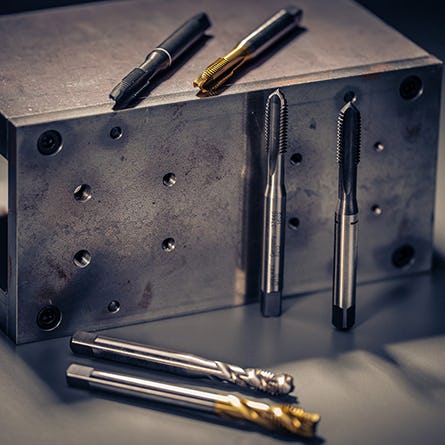 A threaded hole must mate up perfectly with the threaded fastener to be used with it or the assembled joint will not be secure. Creating threaded holes with incorrect thread depth and pitch can be a huge headache for manufacturers. Remedying parts made with non-conforming thread depths and pitches requires holes to be retapped. Otherwise, the parts will be scrapped altogether, leading to challenging and time-consuming rework processes that eat away at profits.

Thankfully, obtaining consistently correct values for these two characteristics within machined holes isn’t as hard as it may appear. Sometimes, simply changing to a different type of tap or adding more lubrication is sufficient. This guide will provide four best practices for avoiding incorrect thread depth and pitch.

Thread depth is the distance from the top of the hole to the point where the screw will bottom out on the last full thread. Pitch is defined as the distance between two points on two different screw threads as measured parallel to the axis of the screw. Remember to account for the lead on the tap to get the correct amount of threads as well as drill the hole minimum .050" deeper than the tap depth. Parts with holes that have incorrect thread depth and pitch can usually be attributed to:

Therefore, to avoid non-conforming thread depths and pitches, considerable attention must be paid to the type of tap being used.

1. Use the Right tap for the Application

The type of tap being used has a considerable impact on the quality of a threaded hole. Therefore, the best practice manufacturers can implement to avoid incorrect thread depths and pitches, is to always fully understand all of the requirements for the type of hole to be cut. Below are some questions to ask:

By considering these questions before ordering tooling and beginning series production, manufacturers can save themselves the frustration of having to deal with non-conforming thread depths and pitches down the road.

If chips in blind holes aren’t removed, they can damage the threads. To effectively tap blind holes in CNC operations, manufacturers should consider using a spiral point tap or a spiral flute tap.

Spiral point taps have a spiraled angle on the front end of the tool to help draw out chips. Similarly, spiral flute taps have an open spiral, much like a standard end mill, that ejects chips by having them travel up the spirals. Both taps are ideal for CNC blind hole tapping. For hand tapping blind holes, manufacturers should first use a standard taper tap, followed by a bottoming tap to thread the entire depth of the hole.

Through-holes are much easier to tap than blind holes and don’t require the same sorts of specialized taps as for blind holes. For through-holes, it is recommended that manufacturers use either straight-fluted taps for hand-tapping or spiral-point taps for power-tapping. Both types of taps are more than suitable for through-holes since they do not require additional features to aid chip evacuation.

2. Match the tap Material to the Workpiece Material

When two metals with similar hardnesses rub together with little to no lubrication, galling can occur. The friction that develops between a tap and workpiece with similar hardnesses can cause heat to develop. As tapping continues, the high temperature can cause accelerated tool wear and cause the tool and workpiece to stick to each other. Consequently, as taps are turned and removed, it pulls out pieces of the threads - essentially stripping them. To prevent galling from impacting part quality, make sure to use lubricant when tapping the workpiece. Or, consider using a Thread Mill in difficult to tap materials or on expensive parts where a broken tap could ruin the part.

3. Do not use Dull or Damaged Taps

Using a dull or damaged tap is a recipe for out-of-spec parts. The problem with using worn tools is threefold - not only can this lead to scrapped parts, but also broken tools, and worse, damaged machine spindles. There are several ways to detect tool wear before it begins to affect part quality:

To avoid incorrect thread depths and pitches related to damaged taps, manufacturers can ensure that tools are sharp through regular tool inspection. Worn taps can be re-sharpened once or twice, but after that, it’s best to purchase an entirely new tool.

If holes have incorrect thread depths and pitches, verify that the machine operating parameters are within the recommended range for tapping the workpiece in question. That is, operators should ensure that:

Incorrect thread depths and pitches can easily be solved by using the right kind of tap based on the workpiece material and intended hole characteristics. If the correct tap is being used, manufacturers should then verify the condition of the tap. If it is dull, consider sharpening it or purchasing a new tool. Finally, manufacturers should verify that machine operating conditions are within the recommended bounds based on the workpiece material. By following these best practices, manufacturers can greatly increase the probability of consistently producing high-quality threaded holes that meet customer specifications and nearly eliminate scrap due to incorrect thread depths and pitches.