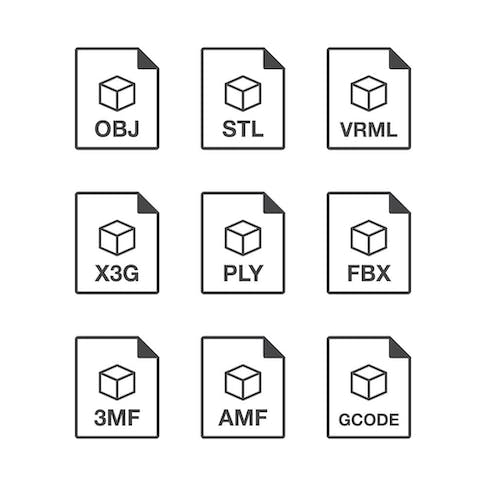 Learn more about these file types and when to best use them.

FBX is an interchange format used for 3D geometry and animations. Various programs are compatible with FBX files, mostly those used in Augmented or Virtual Reality (AR/VR). Kaydara developed the FBX format for motion capture devices which aimed to store complete animation sequences. FBX files present difficulties in most slicer software—the format is not generally supported, so it’s necessary to convert it to a better-supported file for slicer compatibility.

The OBJ file format originated from Wavefront Technologies for their Advanced Visualizer software. It is a common format for export and can be opened by most 3D design packages. OBJ is the preferred file type in colored 3D printing machines. The 3D data entails high-quality geometry, texture information, and full color. Virtually all slicers accept OBJ files as input.

The STL file format is a widely used 3D printing file type. It is the input data for 3D slicer software. STL is derived from the name STereoLithography, which is the 3D printing process developed by Chuck Hull while working at 3D Systems in the 1980s. STL files contain simply the surface geometry of a virtual 3D object, with no other properties. The STL file format is universally supported by 3D CAD software.

The 3MF format is a 3D XML-based system developed directly for additive manufacturing. It contains definitions for colors, materials, and precise shapes that are not present in STL files. Autodesk®, Dassault, Netfabb®, Microsoft®, SLM, HP®, Shapeways, and others are members of the 3MF Consortium that supports the 3MF format.

The PLY (Polygon File Format or Stanford Triangle Format) was initially developed to capture the shape and color data output from 3D scanners. PLY is similar to STL, but more attributes can be integrated such as: color/transparency, texture information, and scan data confidence values.

The PLY format was developed in the 1990s by Greg Turk and Marc Levoy, at the Stanford Graphics Lab. The PLY file format is not accepted by all slicers.

G-code (.G or .GCO file extensions) files are the core instruction set for almost all CAM (computer-aided manufacturing) equipment and the operational language for most 3D printers.

The X3G file format is a native format of MakerBot’s PRINT software and therefore not common in the additive manufacturing sector. PRINT and MAKERBOT software are used for slicing, editing, and build-table preparation of X3G models. It was released in 2012 with the Replicator Makerbot 2.

The Additive Manufacturing File (AMF) format was first introduced in 2011 as the ASTM format for 3D printing. AMF includes support for various properties in addition to surface geometry: color, material, duplicates, and orientation, the last two of which help in laying out build tables.

AMF sought to answer the shortcomings of STL by reducing the tendency to introduce disjoints and “leaks”. It also added support for full color, material, and build orientation.

VRML (Virtual Reality Modeling Language) is a common format for representing VR environments and objects. It became a de-facto standard in the environment and character design for gaming. VRML was launched in 1994 at the first World Wide Web conference by Mark Pesce and Tony Parisi.

VRML is a text format that includes vertices and edges of 3D polygons and also includes color, UV-mapped textures, reflectivity, and transparency. VRML is widely compatible with slicer software.

What is 3D Printing?

3D printing is an umbrella title for a variety of additive manufacturing technologies that build solid 3D representations of virtual and CAD 3D objects. These technologies can use a variety of materials including metals (wire and powder), thermoplastics (filament, powder, and sheet), light-cured resins (liquids), clay, cement, paper (in sheets), and medical/biological or food-grade materials. These materials are used to build 3D items by printing finite-thickness 2D slices taken from the virtual model.

The earliest 3D printing technologies were developed in Japan in the 1970s, by Dr. Hideo Kodama who layered light-cured polymers to construct 3D outcomes. It was Chuck W. Hull, however, whose original patent in 1986 led to the founding of 3D Systems and who originated the term Stereolithography. Various technologies that followed included: SLS (Selective Laser Sintering) in the mid-1980s, FDM (Fused Deposition Modeling) and Binder Jetting in 1988, and DMLS (Direct Metal Laser Sintering) in 1994. Subsequently, various reimaginings of these core technologies have come to market, allowing an explosion in 3- and 4-letter acronyms and minor and major market successes.

For more information, see our guide on All About 3D Printing.

What Are 3D Printing Files?

3D printing files are the carriers of information between the 3D printer and the CAD model. 3D printers use multiple file types to achieve a solid part outcome. For example, CAD or VR designs are created in a native format (STL, OBJ, VRML) using 3D design software such as SolidWorks® and Autodesk® products. These files are used in slicer software to arrange builds. The output of that software is generally G-code, which is interpreted directly by the printer.

What is the Best 3D Printing File?

Identifying the best 3D printing file is hard to define as each file type has its uses. Choosing the best will also depend on the user. For example, if you are looking for the “easiest to use” among the properties of the best performer in any software area, STL is the best 3D print file type. STL is the most commonly utilized file format for input to slicers for the creation of build-table arrangements and output of direct machine instructions. Though it has limitations in resolution/file size, cannot contain texture or color information, and in many regards is considered primitive, it has the advantage of universality. If colored 3D prints are required, on the other hand, then the choice is generally between VRML and OBJ formats. VRML is more widely used, however, because of its prevalence in the gaming and VR sectors.

What Are the Types of 3D Printing Files?

The type of 3D printing files based on the 3D printing workflow are summarized in Table 1 below:

How To Make 3D Printing Files

The following steps can be done to create 3D printing files:

Yes, 3D printing files are required for 3D printers since the files serve as the input for the 3D printer to work on. In addition, for complex parts, the build tray and slicing process are necessary. There are many options and setup stages required to optimize a print job. A user skilled with slicer software can achieve significantly better results than the typical job otherwise achieves.