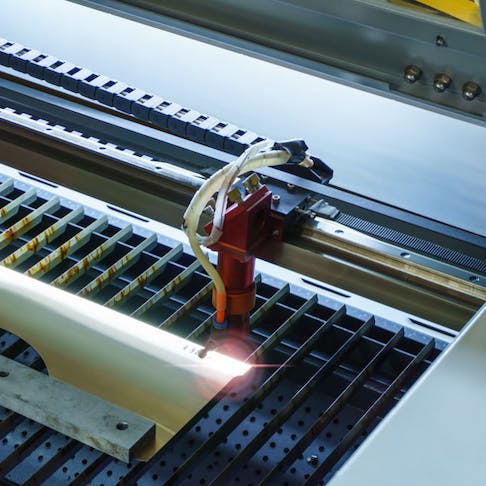 Laser Marking vs. Engraving vs. Etching - Differences and Applications

Our guide to understanding the different laser marking technologies and when they are used. 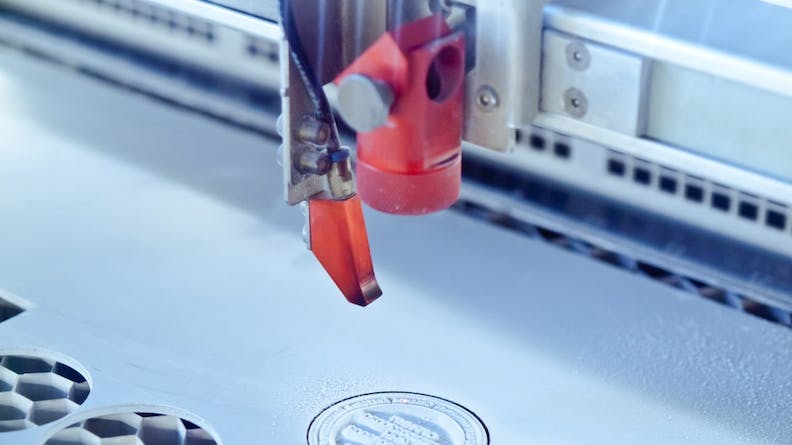 What is the difference between Laser Marking, Engraving, and Etching?

The terms “laser marking,” “laser engraving,” and “laser etching” are frequently used interchangeably but there is a difference. Laser marking refers to placing legible information onto the surface of a part with little or no penetration. In contrast, laser engraving refers to putting information onto a part with evident penetration below the surface of the material. The same laser can accomplish either technique simply by changing settings within the laser marking software. Laser etching creates marks on parts and products by melting their surface. The laser beam sends a large amount of energy to a small area to create a raised print.

The depth of the mark is the main difference between these processes. The specifications for laser marked parts frequently specify a minimum or maximum penetration depths into the material. 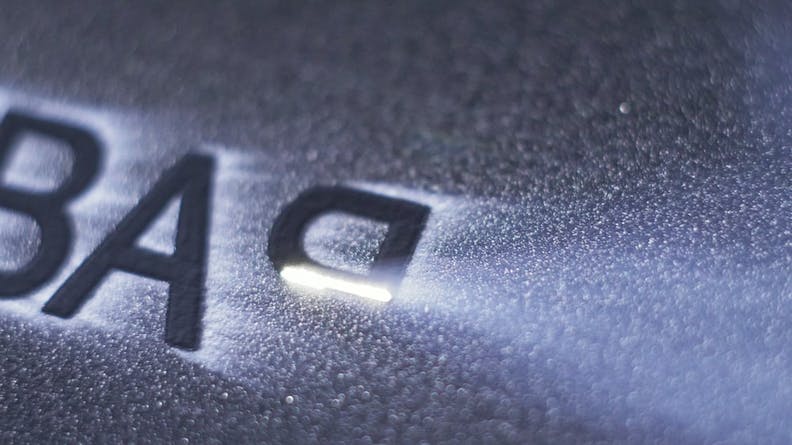 A laser engraving machine in operation cutting letters in a surface.

What is the Laser Marking Process?

Laser marking is also called laser coloration, charring, or laser dark marking, and is attained when the laser beam changes the surface of the material. A low-powered beam is required to complete this slight alteration of the surface. High contrast marks can be created through laser marking without damaging the material. When laser marking a plastic surface, it can be called “charring,” while annealing is commonly used for laser marking metals. There are four main types of laser marking.

Laser foaming is when a laser heats a polymer which results in its melting and forming foam-like bubbles. The process is often used in packaging materials and the automotive industry.

Laser annealing is typically done on metals like steel, titanium, and stainless steel. First, the surface of the metal is heated with the laser beam, which causes oxygen diffusion below the surface. Consequently, the metal begins to oxidize inside, and once it cools off, the oxidation results in a color change.

Carbon migration is used for metals and metal alloys. The laser beam forces carbon to migrate to the surface of the material, which causes dark markings.

Laser coloration is used on plastics and metals. Specific parts are heated depending on the anticipated outcome. The pulse frequency and width of the laser are changed to create different colors and shades. This means that lasers used for the coloration laser marking process must have a broad range of power levels, frequencies, and speed.

Become an Expert in All things Sheet Metal Fab 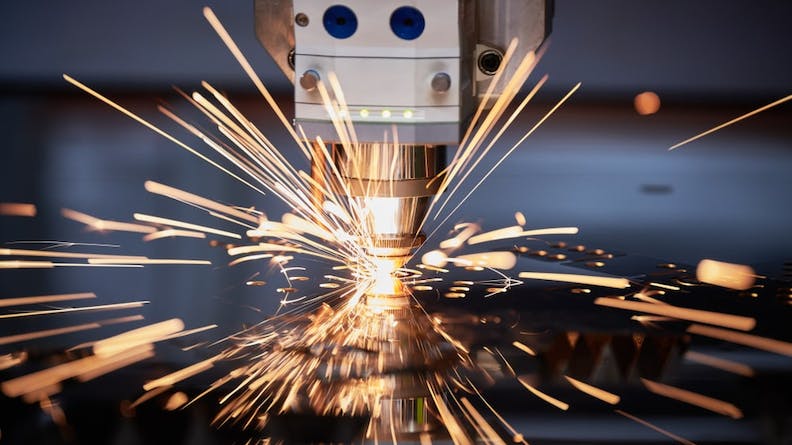 A laser engraving machine in operation.

What is the Laser Engraving Process?

Laser engraving involves physically using a laser beam to remove material from the surface of a workpiece. This process exposes a cavity that reveals an image to the eye. The engraved image can also be felt by hand.

The laser beam creates intense heat that causes the material to vaporize. This is usually done quickly because the material is vaporized with each pulse. A deeper mark can be achieved by repeating the passes. Laser engraving is viewed as a subset of laser marking. Still, it is the ideal option for creating some personalized or custom items for sentimental or commercial purposes. This is also the fastest way of making a mark with a laser engraver. 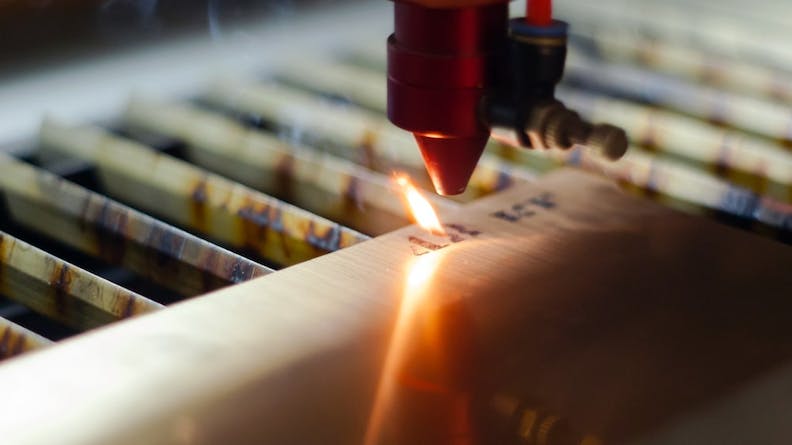 A laser engraving machine is used to engrave characters into a metal surface.

What is the Laser Etching Process?

The laser beam is pulsed during laser etching, releasing sudden bursts of energy at specific intervals. Within one second, a 100-watt pulsed laser can release 100,000 pulses. Each pulse contains one millijoule of energy and can reach 10,000W of peak power.

Since laser etching metals require less energy per area than engraving, pulses are more distant from one another. When the beam hits the surface, the material absorbs its energy and converts it into heat. Although the metal reflects most of the beam’s energy, it also absorbs and changes part of that energy into heat. With laser etching, the material absorbs just enough energy to melt its micro surface and expand.

When the beam’s energy is changed into heat, the temperature of the material increases. At such high heat, the surface becomes malleable so that the shape changes. As the material melts and cools down within milliseconds, localized changes occur on the surface. Surface roughness changes, creating permanent markings. The surface roughness is then permanently transformed. Color changes happen because of different patterns on the material surface. For high-quality markings, black and white provide the best contrasts. Of course, the laser etching process is adjusted for each application and, therefore, slightly different. 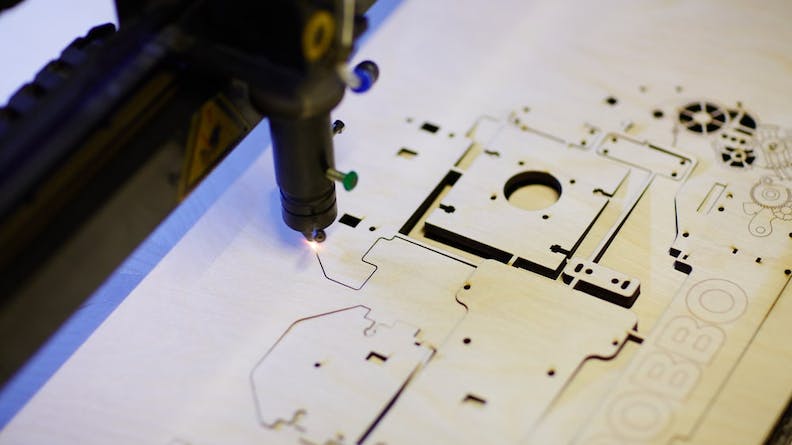 A laser engraving machine used to engrave details into wood.

What are the applications of laser marking vs. engraving vs. etching?

Various industrial regulations mean industries must use lasers for identification, resulting in the wide adaption of these technologies across multiple sectors. For example, in 2013, the Food and Drug Administration required all medical industry manufacturers to include a unique device identifier on all packages and device labels. Likewise, legislation requires manufacturers to have identification marks on any replacement and medication parts in aerospace.

Laser engraving machines used to cost tens of thousands of dollars. They were only used for industrial purposes at first. However, improvements in laser technology have drastically lowered their prices, and it is now possible to buy a basic laser engraver for less than $500. The rise of inexpensive machines has made it possible for anyone to set up a laser engraved business in their garage, and some people have even bought laser engravers purely for hobbies.

Car manufacturers require traceability from their suppliers, which means they were early adopters of the data matrix code to uniquely identify parts going into the final assembly. Laser etching is used for these identifying marks. Nowadays, manufacturers require that part identification be performed as early as possible.

QR codes, serial numbers, bar codes, dates, and part numbers use laser engraving. The processes are also used for best before and expiry dates, maintenance due dates, and company logos.

Laser marking may also be used to create ID cards and smart cards as it is fraud-proof. The process is used in the food, automotive, aerospace, medical, electronics, advertising, semiconductor manufacturing industries.

Laser marking, engraving, and etching are similar processes that can be confusing to understand. We hope this article has clarified some of the key differences between these technologies and clarified their applications.

Are you in need of part marking? Contact Xometry to get your free, no-obligation quote for part marking, engraving, or other services. You can also learn more about the different types of part marking technologies by exploring our Ultimate Guide to Direct Part Marking. In that guide, you will find our guidelines around each process and further information on the types of markings we perform and what we'll do in case of missing information to ensure your order gets to you on time while remaining to your specifications.