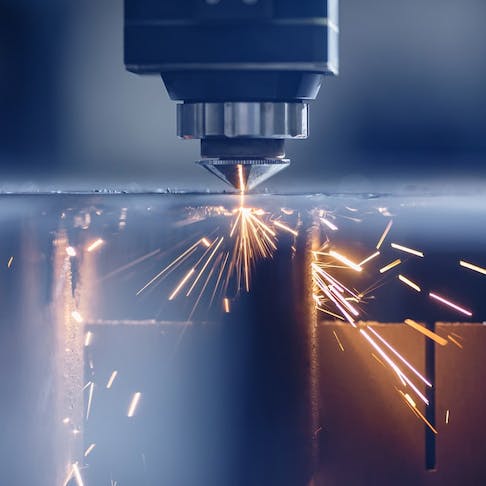 Laser engraving is a technique that allows the creation of clear, easy-to-read and long-lasting marks on parts. It has made its way to the heart of many industries as a reliable tracking method with a multitude of applications. Laser marking is used in everything from common day-to-day items to aerospace parts.

In this guide, we will take a look at the laser engraving process, its uses, how it works, some common confusions around this technology, and common materials that are laser engraved.

Below, you will be able to find information about the following:

What is Laser Engraving?

The laser marking process is used to engrave permanent marks on different types of materials. In this process, a laser engraving machine vaporizes a specific area of the desired part or material in a given pattern made by lasers, including CO2 or fiber lasers. This results in a high-contrast physical modification of the surface that is easily visible to the naked eye.

Laser engraving work is used to engrave logos, barcodes, serial or part numbers, and even QR codes. The technique is popular due to its high reliability, as well as the engraving's permanent nature, which assures traceability and identification of the part or material in question for a long period of time.

Many using the terms laser etching and laser engraving interchangeably. However, the two are different processes, even though their objectives are the same.

As mentioned above, laser engraving works by performing physical removal of areas of a surface via the use of a laser beam. This means that a cavity is created that can be felt by touch and seen by the naked eye. High temperatures are needed to achieve that almost-instant vaporization.

The laser etching process implies the heating of the part surface via a laser beam with the purpose of melting a specific region. The heat melts the local surface area, leading the material to expand. This causes a raised mark that can also be seen with the naked eye and can be felt by touch. However, since we are talking about melting, the temperatures involved are lower compared to laser engraving.

A table containing reference data regarding the melting and vaporization points of various common materials and alloys can be found below:

Keep in mind that the values above are only for reference. In the case of the alloys, the temperature may vary by the order of hundreds of degrees Celsius, depending on the materials used in the alloy and their concentration.

The main difference between the two processes is thus the transformation they impose on the part surface. While in laser engraving you can create deep crevices, the etching process typically does not leave such deep marks. The marks left by etching are usually 0.001” deep or less. No material removal is involved in the laser etching process.

While laser etching may be faster, the laser engraver technique provides more durable marks. This is because the deep crevices formed upon the impact by the high-temperature laser pulses require more time and energy to form (the vaporization temperature is much higher than the melting point).

Laser etching may also result in a local increase in the elevation of the part’s surface, which may not be convenient or appropriate for specific applications. A stark advantage of laser etching is that it is capable of producing a higher contrast in comparison with the engraving technique.

For this reason, it is not unusual to see both processes used on the same part in order to create an even stronger contrast. Laser etching can also besusceptible to abrasion, which is not a concern in the case of engraving.

Both processes have their use cases, depending on the requirements of the customers and the specific application or part. We’ve written a more in-depth explanation about the differences between laser engraving, laser etching, and laser marking if you’d like to learn more.

Laser engraving technology can be used on a wide range of materials, such as:

Woods – this may sound like a fire hazard, but due to the very high temperatures involved in laser engraving, the area where the laser beam touches the part is almost instantly vaporized. Both hardwood and softwood parts can be engraved. Non-porous woods are best suited for laser engraving.

Plastics – in this case, the required temperature for laser engraving varies heavily depending on the absorption spectrum of the said plastic and the additives involved in its manufacturing process (colorants, retardants, release agents, etc.).

Metals – the heart of many industries. Most common parts subjected to laser engraving are usually made of different alloys such as stainless steel. Stainless steel engraving is one of the most commonly requested services.

While vaporization has become a common term used to describe the conversion of any type of material into gas, the correct term used in the industry is sublimation – the process of converting a substance from its solid state into its gaseous state without it becoming liquid.

This means that the part’s surface, when subjected to laser engraving, absorbs the energy from the laser beam without turning into liquid. For this reason, special care must be taken in order to ensure the gaseous substances released in this process are safely stored away. This is even more relevant when talking about plastics, for example, which are known to emanate toxic fumes when heated to high temperatures. Some engravers use fume extraction systems for this reason.

The sublimation temperature is reached locally within milliseconds. For this reason, laser engravers are considered quite powerful machines which shouldn’t be used on parts that are considered safety-critical for different operations, as they modify the structure of the part. As such, the process is usually adapted to fit specific applications.

Laser engraving is a popular method to help improve efficiency in various supply chains by offering a method to keep track and identify different parts via the use of codes or serial numbers. The process leaves marks that last for a long time and can be easily observed with the naked eye. This technique is highly versatile as it can be used on a wide range of materials, making it the go-to option for many industry experts.

You can request an instant quote today to see how Xometry's laser engraving services can serve you, or you can also check out our guide to part marking, which provides broader information about other types of part marking, including tagging, ink stamping, screen printing, and other types of laser marking and engraving.