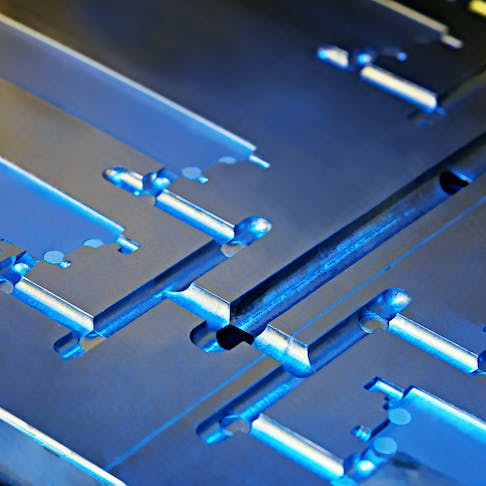 Gates ensure plastic flows into a mold cavity at an even rate and can impact the visual appearance of your parts.

What Is An Injection Molding Gate?

A gate is a small opening in the tool that allows molten plastic to enter the mold cavity. Gates are a critical aspect of mold design because the location, number, and type will affect cosmetics, cycle times, and part features. This article will discuss the different types of gate locations and gating vestiges (visible marks left after cutting off excess gate material) as well as the benefits of each.

Edge gates, which can include fan and tab-shaped gates, are the most common ways to gate a tool. An edge gate introduces material at the main parting line, or where the two halves of the mold meet, with a perpendicular runner. Because edge gates are easy to machine, they can be widened or modified to help material flow. Edge gates typically require the runner to be removed after molding through a manual or automated cutting operation. Edge gates tend to leave square or line-like vestiges. 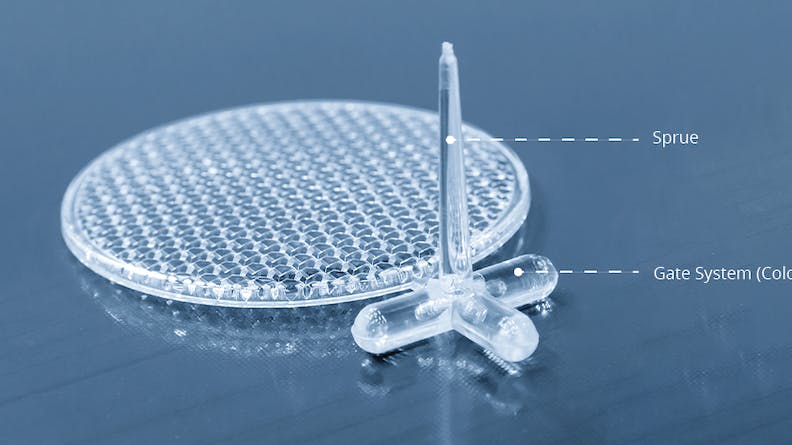 A sprue directly into an edge gate of a part. The perpendicular features are called “cold slugs” and help control material shear entering the gate.

Smaller parts or features may require a tunnel or submarine gate. These “subgates” are conical, tapering to a smaller round feature below the parting line. Unlike edge gates, a tunnel gate has a much smaller cross-sectional area, which dictates how the material enters the cavity under pressure; this may be a limitation to how subgates can be used on larger parts.

Some gates may not require manual shearing or removal of the runner. For example, cashew gates are similar to tunnel gates by being located below the parting line but their design allows for the runner to automatically shear off after molding. Edge, tunnel, and cashew gates can be strategically placed in one or multiple locations of the mold. They can also be used in multi-cavity molds where material is channeled through a tree-like runner.

For single-cavity molds, a direct sprue gate can be placed in the broadest cross-section of a part, having a linear channel on the core side. Directed sprue gates are often centered on the broad face of a part and can have a circular vestige.

For molded parts with large open diameters, such as an opening to allow a knob or connector to pass through, a diaphragm gate can be used. Diaphragm gates appear like a membrane across the circular opening on a part and get sheared off after molding. Diaphragm gates may be required for an even fill of material, mitigating large knit lines across cylindrical or conical features. Alternatively, an array of edge or fan gates may be used inside large openings like a bezel for an LCD screen with a similar effect. 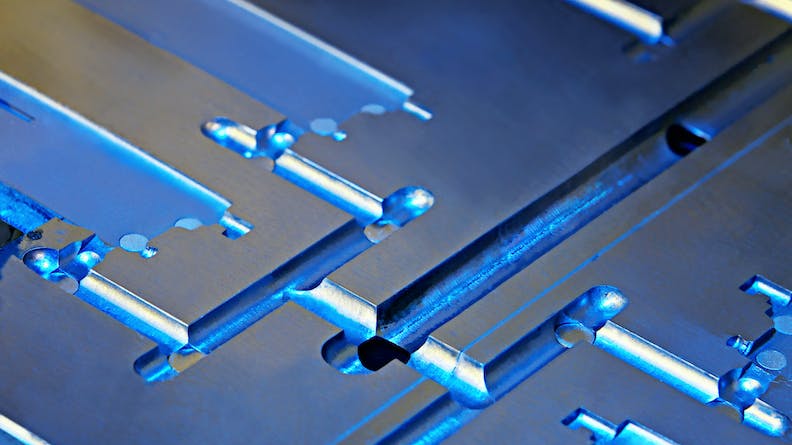 The runner and gating systems for a multi-cavity mold.

Gating systems are affected by whether hot or cold runners are used. Hot runners have many advantages over cold runner systems but drive up tooling costs. Hot runner gating systems are used for production tooling or when the part complexity requires multiple simultaneous injection points for an even fill. Typically, the vestige of a hot runner with a thermal gate system looks like a small point in a concave dimple. Hot runner gates can also have valve gate systems that can allow for a higher flow of material and less gate vestige. Keeping the material molten and held at the right pressure between cycles saves on excess waste. Because a hot runner can either be a single drop, paired with other runner systems, or a custom manifold, these systems allow for the highest control when molding parts.

Greg Paulsen
They call me the Director of Application Engineering at Xometry. This means I not only get to produce great design-for-manufacturing content, but also consult on a variety of custom manufacturing projects using CNC machining, additive manufacturing, sheet metal, urethane casting, and injection molding. If you have a question, I'm your guy.