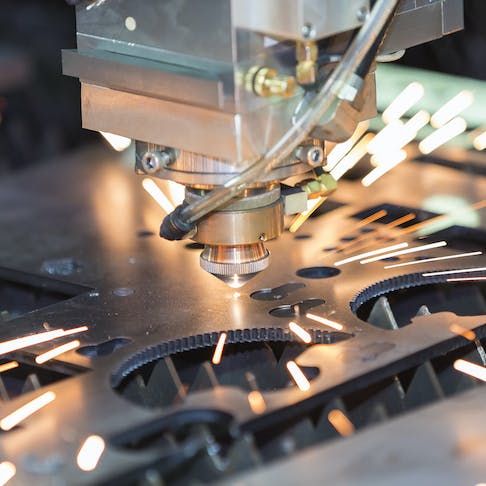 Laser cutting is a process that aims a high-power laser through optics to cut materials for industrial manufacturing applications. This type of manufacturing is classified as a sheet metal cutting process since it is often used to cut this form of metal. Laser cutting is also, however, commonly used for quality welding and to cut other materials such as composites, rubber, glass, wood, and aluminum. There is also 3D laser cutting, which uses CNC (computer numerical control) machines to create cuts with depth, as opposed to 2D cuts which simply cut pieces out of a flat surface. This guide outlines all the basics of laser cutting services to help you make the best decisions in requesting the service you need. We’ll be covering:

If you’re interested in laser marking as well as cutting, you can also check out our guide on part marking. You can also explore our other methods of sheet cutting in our sheet cutting services guide.

What is Laser Cutting?

Laser cutting involves using a focused, high-powered beam of coherent light to cut through materials, often in sheet form. Material hit by the laser is vaporized and blown away by gases to ensure a clean cut. There are several types of lasers used depending on the material that needs shaping, but all of them rely on programming to carry out a specific pattern of cuts for creating one or more finished parts. While laser cutting is faster and more accurate than plasma cutting, you will find waterjet cutting is more effective with thicker materials, as well as materials that have lower melting temperatures.

Laser cutting is used to cut parts in materials ranging from aluminum to composite to acrylic to wood. Because of the flexibility, quickness, and accuracy of this method, it is popularly used in industries including the aerospace, general manufacturing, automotive, medical, and electronics fields. When designing for this process, make sure your design file is a vector, your design relieves stress points, and you take the width of the kerf (the laser beam’s cut) into account. It’s also essential to know the material you need for your parts to ensure they have the right properties, although Xometry’s instant quote generator can automatically suggest the right material for your application.

The most common lasers are CO2 because they have high energy efficiency and a high power output ratio. These are best suited for cutting, boring, and engraving. These lasers, which create an infrared beam invisible to the human eye, operate by electrically energizing a gas-filled tube with mirrors on each end. Particles continue to collide and split until they are powerful enough to leave through the one mirror, which is less reflective than the other. From there, they travel a long path of lenses and mirrors until the light hits the workpiece. As it cuts, high velocity cutting gas blows away excess material. CO2 lasers provide better edge quality on stainless steel and aluminum-plated material while remaining flexible enough to work with a variety of other materials. However, they can only cut thin sheets of nonferrous metals like aluminum, and they require a lot of power and maintenance. They’re also slower than fiber lasers. These factors can translate to comparatively increased service costs.

Fiber lasers, on the other hand, are used to pierce more reflective surfaces, thanks to their greater efficiency than CO2 lasers and more powerful beam. These lasers are also used in annealing, etching, and engraving. They work by using pump diodes to send energy into fiber optic fibers. From there the light passes through a series of lenses until it’s powerful enough to cut with the help of NO2 or oxygen. While these lasers are more limited in what they can cut, they’re less expensive to purchase, run, and maintain. This is partially due to their relative simplicity; they have fewer parts, and principally utilize semiconductors (which last longer) to generate laser light. They’re also faster to operate and more energy-efficient, which can translate to less expensive part cutting. Fiber lasers can work on metals including alloys, glass, wood, and plastics.

Nd lasers have high energy, but low repetition efficiency, while Nd:YAG lasers have a high power output for cutting thicker materials but are more expensive to operate. Both Nd and Nd:YAG lasers are used for boring and welding; they can also use a pulsed laser beam which allows them greater precision. Nd:YAG lasers can also be used for engraving. Both of these laser types use neodymium to enhance infrared light, resulting in powerful beams that allow them to process materials that require greater amounts of energy to cut. They can also be used for boring. Nd:YAG lasers feature smaller beam sizes than fiber lasers, which allows for more energy focused in a smaller area to perform faster, more accurate cuts and marking. While these lasers are able to cut with greater strength, however, they also require a warm up period to start production and more maintenance in general. They are also less energy efficient. These lasers can be used on metals, plastics, and even some ceramics.

How the Laser Cutting Process Works

As described above, each type of laser functions in a slightly different way. However, all lasers are controlled through a CNC program inputted by the operator that interprets the part shape into the series of cuts it must make (hence the other term for the process, CNC laser cutting). The laser itself is adjusted to the type of material and its thickness.

From there, laser focusing optics, including mirrors and lenses, direct energy into a high-intensity focused laser beam. Once light emerges from the laser resonator and cutting head, it hits the workpiece. Cutting gas, such as nitrogen or oxygen, is emitted from the nozzle to blow molten material out of the kerf, and the cut edge gains a drag line pattern. The code controls the movement of either the workpiece or the laser beam until the cuts are finished. From there, the machine can go on to cut other parts from the same sheet or move on to the next workpiece.

CNC laser cutting is often chosen as a manufacturing option since it produces highly durable parts with its ability to cut through a variety of strong sheet metals. Metal laser cutting is not the only type available, however. Plastics, wood, foam, rubber, and other materials can also be cut by laser.

Laser cutting offers a cost-effective way to fabricate 3 main types of custom parts— enclosures, chassis, and brackets. Fabricated enclosures may include device panels, boxes, and cases for applications like rackmounts, “U” and “L” shaped parts, and consoles and consolets. Chassis can be fabricated in the form of handheld or industrial-sized electromechanical controls. Brackets that are used in lightweight or corrosion-resistant applications are often laser cut, and the Xometry platform can fully build in fasteners and hardware. Because of its ability to cut in 2D profiles using common stock, laser cut blanks can be extremely economical while still having short lead times.

Is Laser Cutting Right for Your Project?

Laser cutting is often chosen over traditional CNC machining (mechanical cutting) processes for its ability to produce custom parts faster with commodity flat panel materials, which makes it highly scalable. The lower setup costs and 2D nesting of cutting paths mean parts can be produced in quantities ranging from one prototype to up to 10,000 production parts, with a rapid turnaround of as few as 5 business days.

Laser cutting is also prized for its clean cuts, which also results in a decreased contamination of the workpiece and at a higher accuracy to CAD. Though these cuts are not as clean as a waterjet and come with a small chance of operator error, laser cutting produces parts that are precise because of a lower likelihood to warp. The same laser operation can also add marking or engraving to the part by decreasing the laser power.

Compared to plasma cutting, laser cutting is more precise and less energy-consuming to operate. However, laser cutting has an upper limit on the thickness of the material it can cut. CO2 lasers are best for processing metals, while fiber lasers can handle thicker materials. For metals thicker than 4 inches, or materials with lower melting temperatures such as plastics and foams, waterjet cutting may be the best manufacturing process.

Designing for the Laser Cutter

When planning for laser cutting, makes sure you follow these pro tips to avoid mistakes and ensure parts are the exact dimensions you need:

Our laser cutting service can process sheet metal parts up to 53 x 121 inches, including passthrough. However, we also have access to platforms up to 10 by 20 feet for certain laser-cutting projects. Some of our most popular materials include:

Our lead tolerances include +/- 0.005” nominal on the top, though for thicker materials there may be a tolerance deviation on the bottom because of tapers inherent to the laser cutting process. Most of these materials can also have finishing options applied such as bead blasting, anodizing (both type II and III), powder filming, chem filming, painting, and other custom finishes. Learn more about the types and thicknesses available on our sheet cutting page.

Xometry offers custom on-demand laser cutting services in nearly limitless capacity thanks to our Manufacturing Partner network. This allows you to get high-quality parts, ranging from prototypes to high volume orders, in as few as 5 business days. The site provides instant quoting for your sheet metal fabrication needs, allowing you to specify your materials, details, and the size of the project in a few clicks. Whether it is a flat profile cut or a complex welded enclosure, get your price and lead time in seconds with our instant quoting feature. We aren’t limited to laser cutting either. Check out our other high-quality, cost-effective solutions, including cutting and bending services, to find out how we can make your project a reality.