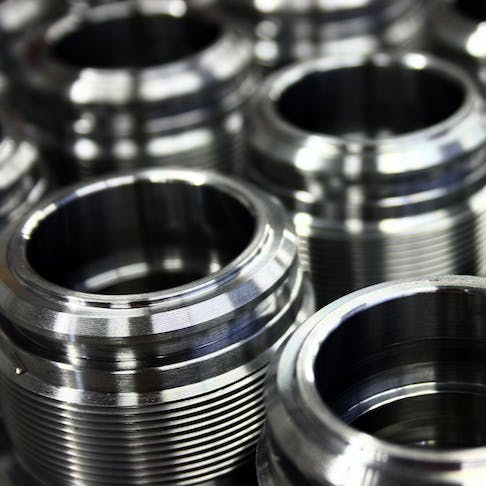 Four Causes of and Solutions for Non-conforming Threads

Non-conforming threads on machined parts can be an enormous headache for manufacturers. This is especially true because cutting threads is one of the last processes in a machining operation, and defective threads can lead to a substantial amount of scrap parts and a lot of wasted time. Machine program modifications can easily prevent or correct any defects. But more aggressive action, such as purchasing new tools, may also be required to avoid producing non-conforming threads. In this article, we elaborate on common thread defects and offer some tips on how to avoid non-conforming threads that can hopefully save manufacturers both the frustration and costs associated with scrapped parts.

Four Causes of and Solutions for Non-conforming Threads

There are several ways to cut threads - tapping, thread milling or turning, thread rolling, and die threading, among others. However, no matter what method is used and no matter whether the threads are cut internally or externally, the defects that can occur in threads across all methods are similar. The most common defects, the reasons they occur in threaded parts, and how to solve them are described below:

Stripped, chipped, or torn threads can be caused by a multitude of factors. For example, the tool itself may have dulled or has damaged edges or the alignment between the threading tool and the workpiece may be incorrect.

With dull or damaged taps, dies, or thread rollers, threads are likely to be stripped, and tools are more likely to break. This is because the dull edges of a tool cannot remove enough material fast enough, causing excessive friction, leading to work hardening in both the tool and the workpiece.

With dull tools, more rubbing between the tool and workpiece occurs. What results is heat generation in both the tool and the workpiece that can cause both deformation and hardening in the workpiece. If the workpiece is too hard, tool wear and eventually breakage will occur. Therefore, manufacturers need to check that the taps, dies, and roller edges are sharp and that the hardness of the threading tool is higher than the workpiece, typically around 60 HRC, to prevent stripped or damaged threads.

In the case of thread tapping, incorrect alignment between the tool and the hole, even by the tiniest amount, can cause threads to become stripped or cross-threaded. This can damage taps due to the increased forces and friction experienced during threading. If holes are misaligned and tapping continues, the damage that occurs in both the tap and the threaded holes continues to increase until the tool breaks. Similarly, misalignment between the centerlines of two thread rollers and a workpiece can also cause thread defects.

Excessive forces on the workpiece caused by the threading tool can cause the workpiece to deflect - making threads on one side of the hole deeper than the other or deeper threads at the top of the hole than the bottom.  For tapped holes, the machinist should verify that the hole is drilled to an appropriate size (more on this later) and that the tap is concentric with the drilled hole. Longer chamfers can help align taps with holes. For rolled threads, manufacturers should ensure that the centerlines of both the thread rollers and the workpiece are parallel with each other to ensure proper threading.

Another common defect in threading is improperly sized threads. When it comes to tapping, undersized threads can be attributed to:

A surefire way to tell if threads are undersized is whether there is difficulty removing the tap from the hole or if the tap breaks. This problem is due to the tap making too big a cut and chips becoming jammed in the flutes of the tap. If ample lubrication is applied and taps are still difficult to remove, consider changing taps entirely or increase the diameter of the drilled hole.

While oversized tapped threads can also be attributed to:

To correct this, manufacturers should select a more suitable tap, ensure alignment between the tool and hole, or increase tapping speed. The points made here can also be applied to external threads made with dies.

Built-up edges (BUE) and burrs not only adversely affect threads but can also lead to damage elsewhere on the part during handling. During threading, BUE and burrs are formed due to dull edges on threading tools that cannot adequately remove material from the workpiece or due to threading tools composed of a material softer than the workpiece. This BUE, if not removed, can dig into the sides of the hole and strip threads.

BUE and burrs can be an even costlier mistake than just non-conforming threads and burrs due to the potential damage that can occur to entire lots of parts. Loose edges and burrs not removed during threading can scratch and damage other parts during handling. Manufacturers should move swiftly to prevent BUE and burrs from tainting entire orders of parts. To prevent BUE, manufacturers should replace worn-out taps, use taps made of more suitable materials, or use more cutting fluid to help facilitate proper chip removal.

Though galling is an issue more closely related to the installation of fasteners rather than manufacturing, it can be positively impacted by manufacturing and design choices. Similar to BUE and burrs, galling can occur when two metals with similar hardness rub together with little to no lubrication. When a bolt and the threaded hole of the part rub, the pressure, and friction between the two are exceptionally high. This friction causes heat generation that results in the two rubbing surfaces to wear out and stick to each other. Consequently, as the bolt is moved, some of the workpiece material is tugged along with it - essentially stripping the threads in both the hole and bolt. This phenomenon is typically seen in parts made from stainless steel, aluminum, and titanium - or parts with fine threads.

Manufacturing practices such as using coarse threads rather than fine threads or using a bolt made from roller dies rather than CNC lathes can help prevent galling from occurring. During the installation of a fastener, consider using more lubricant or slowing down tightening speed.

Non-conforming threads are defects that have the ability to cause significant damage to parts and profits. Fortunately, these issues can easily be avoided. Manufacturers should ensure that threading tool edges are sharp, threading tools and workpieces are aligned, and the hardness of threading tool are suitable for the workpiece material to prevent defective threads and burrs from harming operations. If these three things are satisfied, manufacturers should seldom encounter non-conforming threads.