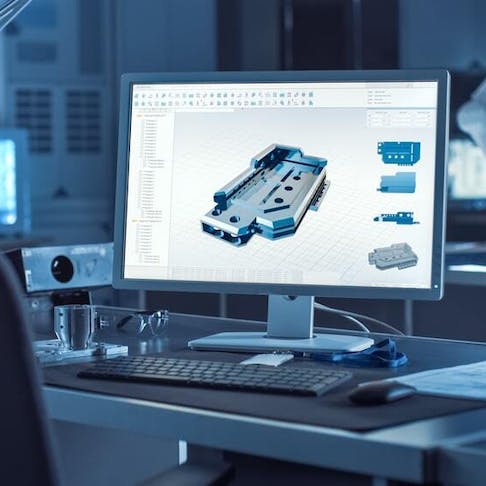 Discover all about these useful software tools.

3D printing continues to make inroads into the hobbyist market as well as in the manufacturing domain. Product fabricators, medical experts, and construction engineers alike are now seeing the utility and convenience of this manufacturing method.

3D printers outwardly appear to be standalone devices. However, this is not so. Software programs control the printing hardware and mesh the parts of the build process together. They help the designer create the digital models of the pieces to be printed, then assist in determining the printing strategy. Finally, they send the printer the specific instructions it needs to carry out each step of the printing process.

Tinkercad was created by a renowned software company, Autodesk. This 3D modeling program provides the ability to manipulate shapes found in a library of files. Models are built by piecing together these basic shapes. Tinkercad also allows for scaling and rotation of these geometrical building blocks, as well as the option of making them hollow or solid.  Beginners and young users alike will find this software quite helpful because of the simple nature of the user interface. The program is completely free and accessible to anyone. Entry-level students and people with no prior experience in handling 3D printing software should strongly consider Tinkercad.

Blender is a 3D design software package with quite a range of applications. Due to the versatility of this application, not only can one create 3D models, but also video games, and visual effects (VFX) in movies. Blender possesses a feature called a 3D printing toolbox. This enables a user to analyze a mesh to see if there are any errors that could potentially cause the printing process to fail. With the toolbox, the geometry of the overhangs can be checked for accuracy. Moreover, it works on Windows, macOS, and Linux operating systems. Blender is great for sculpting and mesh modeling. It is a completely free and open-source software program. Though Blender has a lot of beginner resources, it is designed for use by professionals.

Sketchup is a 3D software program used for the creation of architectural designs. It also allows for the visualization of large types of machinery and their various parts. Its specialty is direct modeling, which is creating geometry rather than features. SketchUp has both a free and a paid version. The free version is quite helpful but it comes with limited features including its compatibility with only STL, SKP, and PNG file formats. It is good for personal use but may not be a good option in an organizational setting. The paid version comes with three offers: SketchUp Shop ($119/year), SketchUp Pro ($299/year), and SketchUp Studio ($699/year). SketchUp is a 3D modeling software for beginners who want to improve their design skills.

Another 3D modeling software program for beginners is Meshmixer, from Autodesk. Unlike other conventional programs, Meshmixer does not allow one to build 3D models from scratch. Nevertheless, it is handy for repairing, hollowing, and filling pre-existing models. Meshmixer is used for direct modeling, optimization, and sculpting. This free 3D design software program is good for both beginners and professionals.

SculptGL is the widely used sculpting software. It is browser-based and allows one to mold a lump of “digital clay” into any desired shape. SculptGL is also a free and open-source 3D modeling program. It is user-friendly and quite accessible. Maximize the benefits of the software as a beginner by understanding the basic commands and 3D modeling techniques.

Vectary is online software that supports both 2D and 3D modeling. It has software modules for subdivision modeling, parametric plugin, and mesh modeling. This easy-to-use 3D drawing app has proven useful to both beginners and professionals. It is also used for product design, games, and graphic design. A $12 monthly subscription is needed to access the complete set of software functions. Vectary is best used for parametric and mesh modeling.

Wings 3D, a 3D modeling software program for beginners, is a subdivision modeler with advanced options. Although the tools are advanced, beginners can navigate their way through them. For example, a feature called "AutoUV" enables a user to map or drag and drop images on a 3D model. Wings 3D is a free and open-source modeling program. It is best for those looking for a wide array of tools with a user-friendly interface, whether beginners or professionals.

BlocksCAD, a 3D model builder, is a simplified version of openSCAD. In BlocksCAD, model scripts are created by stacking together colorful bricks. It is ideal for kids, as its LEGO-like approach to scripting makes learning easier. Beginners will find the colorful interface quite appealing. This web-based app is completely free and is good for beginners who want to make designs based on openSCAD scripting.

Leopoly is a software program that offers 3D printing, customization, and sculpting of 3D models. It is quite handy if a user has no means of printing the created model. This is because Leopoly models can be created and sent to a 3D printing service bureau. It is a free 3D software program and is perfect for students and beginners looking to sculpt 3D models.

ZBrushCoreMini is a simplified version of Pixologic's ZBrush, an advanced sculpting program used by professionals. It comes with a selection of eight basic brushes for smoothening, polishing, pinching, inflating, and more for the 3D Modeler to apply. ZBrushCoreMini is completely free and good for beginners who want to learn and understand digital sculpting.

What Is 3D Printing Software?

A 3D printing software is used to build, slice, and prepare 3D models for creation using a 3D printer. For modeling software programs that do not come with slicer capabilities, a slicer software application such as Fusion Autodesk 360 may be used. A slicer transforms the model built with the CAD software into a form that the 3D printer can understand and process.

For more information, see our guide on 3D Printing.

What Is the Most Widely Used 3D Printing Software?

The most widely used 3D printing software is Autodesk Fusion 360. It Is a great tool aimed at professionals for designing and manufacturing products. Inexperienced designers can start out with Tinkercad (another software from Autodesk) before transitioning to Fusion 360. Fusion 360 possesses capabilities that distinguish it from other software including generative design, sculpting tools, computer-aided manufacturing (CAM), and 3D printing.

How To Use 3D Printing Software

The steps in using 3D printing software depend on the program used. Most brands will have an instruction guide to get you started. In general, the steps are:

How Does 3D Printing Software Work?

A 3D printing software works by using CAD software first to create the digital model of a part or object that is to be printed. Then, a slicer software is used to break down this model into a succession of slices. Without the slicer, the 3D printer will be unable to interpret the 3D model. The last step is the actual printing of the desired object. The data generated by the slicer program are sent to the printer as step-by-step instructions in G-code, and the part is then printed according to these machine instructions.

For more information, see our guide on the Best 3D Printing Software.

Is There Free 3D Printing Software?

Yes, there are several free 3D printing programs including Tinkercad, SculptGL, and Meshmixer. Several of these platforms are open source. Beginners and intermediate-level users alike looking to hone their modeling skills will find these to be very useful applications.