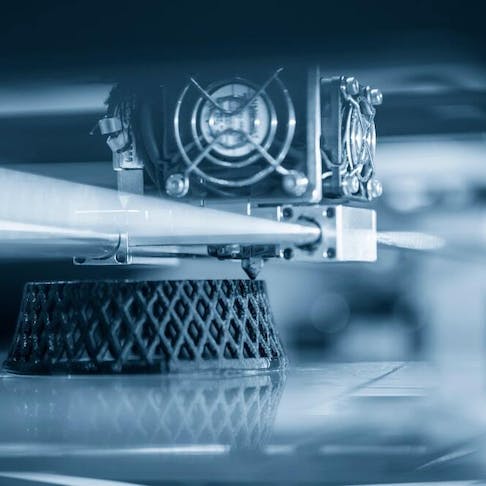 PolyJet vs. Multijet: Differences and Comparisons

PolyJet printing and Multijet printing (MJP) are both forms of additive manufacturing (AM) that build parts through the deposition and curing of UV-reactive photopolymers. In both methods, one printing head deposits the support material, while one or more other print heads deposit photopolymer droplets to build the actual part. While these two processes are similar, there are three main differences between PolyJet vs. Multijet: the materials used for printing, the build process, and the post-processing methods. Polyjet's multiple print heads allow the use of multiple materials in a single job, while Multijet's two heads restrict it to one material per part.

While both PolyJet and MJP systems can be expensive, they can both simplify rapid prototyping and handle small to medium production runs. In this article, we dive deeper into the comparisons between PolyJet and Multijet and the differences between them, to help you understand which system is best for your project.

PolyJet Definition and Comparison to Multijet

PolyJet printing was developed in 2000 by Objet Geometries. The technology was acquired by Stratasys, which has since owned PolyJet’s trademark rights. Polyjet works based on the same general concept as an inkjet printer. It deposits tiny droplets of photopolymers in pre-programmed locations to form successive 2D layers of the planned part. A UV light then solidifies the droplets to set the shape of each layer. PolyJet can deposit layers as thin as 16 micrometers, depending on the model of printer, part geometry, and materials used.

No matter how accurately it is deposited, the photopolymer deposited to form the actual part is not dimensionally stable until it is cured. To enhance dimensional accuracy and provide a frame for the photopolymer to stick to until it is cured, support materials are laid down at the same time as the main polymer part. These materials are completely eliminated from the final part. Two types of support materials are used with the Polyjet process: matte and glossy. Matte-finish supports encapsulate the entire part and help ensure dimensional accuracy. Glossy supports are used where overhangs and other complex geometry are present. Completed parts are finished by washing them with a water jet and soaking them in a chemical bath to remove the support materials.

PolyJet can be considered a similar process to multijet. One difference is that PolyJet can print parts composed of several different materials in one job. The build process and post-processing methods also differ.

What Are the Advantages of PolyJet Compared to Multijet?

Listed below are the advantages of PolyJet vs. Multijet:

What Are the Disadvantages of PolyJet Compared to Multijet?

Listed below are the disadvantages of PolyJet with respect to Multijet:

Multijet Definition and Comparison to PolyJet

Multijet printing is a proprietary form of 3D printing created by the company 3D Systems. MJP works like an inkjet printer. The printing head creates successive layers of the part by dispensing droplets of either UV-curable photopolymers or casting waxes. Multijet can achieve resolutions and layer thicknesses similar to those of Polyjet printing - as small as 16 micrometers. Unlike the PolyJet process, however, the MJP technology cannot print multiple materials simultaneously.

Support structures for Multijet-printed parts are composed of paraffin wax. When parts are completed, they are placed in an oven to melt the wax away. This makes post-processing much easier compared to PolyJet.

What Are the Advantages of Multijet Compared to PolyJet?

What Are the Disadvantages of Multijet Compared to PolyJet?

Listed below are the disadvantages of Multijet compared to PolyJet:

Comparison Table Between PolyJet and Multijet

The table below compares the attributes of  PolyJet and Multijet:

Both PolyJet and Multijet is capable of printing complex and detailed parts - parts that wouldn’t be manufacturable using traditional methods. While the two processes are quite similar, two of the three main differences are the materials used for printing and the ease of post-processing. PolyJet can print composite parts in one job but requires more  post-processing methods than Multijet printed parts.

PolyJet and Multijet systems use similar technologies and processes. Both use UV-sensitive photopolymers and a UV curing system. While not significantly different, the two methods differ in the number of print heads present in the system. PolyJet can have two or more heads, while Multijet can have a maximum of two.

In PolyJet systems, multiple materials can be combined into a single raw material with characteristics from all its constituent materials. These composite materials are called “digital materials.” They enable the printing of a single part with different material properties in one build.

Materials used in Multijet systems are photopolymers. Multijet-printed parts are necessarily a single color and are composed of a single material. If composite materials are needed, whether for aesthetics or functional reasons, PolyJet may be the better option.

Surface finishes of PolyJet vs. Multijet-printed parts don’t significantly differ. Because of the precise resolutions and layer thicknesses of both PolyJet and Multijet, surfaces on completed parts are smooth. Occasionally, rough surfaces may be present in more complex geometric areas but can easily be smoothed out with an appropriate post-process.

PolyJet and Multijet systems can be expensive compared to other forms of 3D printing. PolyJet printers start as low as $6,000 and go as high as $75,000 for more advanced systems. Multijet printers are similarly priced and average around $43,000.

What are the Mutual Alternatives to PolyJet and Multijet?

An alternative to both PolyJet and Multijet is:

What Are the Similarities Between PolyJet and Multijet?

Similarities between PolyJet and Multijet include:

What Are the Other Comparisons for PolyJet Besides Multijet?

Besides Multijet, another alternative to PolyJet is:

What Are the Other Comparisons to Multijet Besides PolyJet?

Besides PolyJet, another potential alternative to multijet is:

This article summarized the differences between PolyJet and Multijet 3D printing technologies.

To learn more about PolyJet vs. Multijet and to help select the perfect technology for your products, contact a Xometry representative.