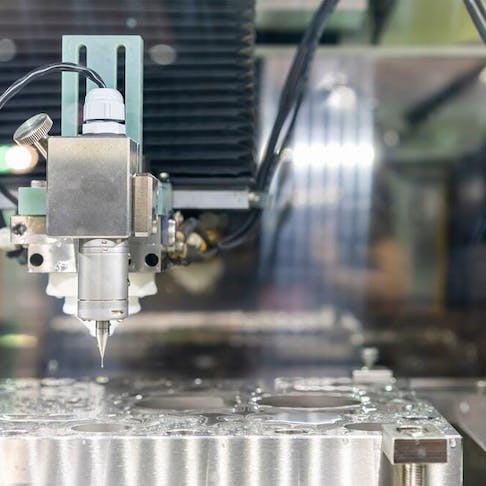 The History of CNC Machining

Learn about the origins of this versatile manufacturing process.

CNC (Computer Numerical Control) machining refers to the process of manufacturing a part by the removal of material with a cutting tool that is under automated control as opposed to manual control by a machinist. This cutting tool can either be held stationary, with the part moving, or the tool can be rotated and moved into a piece of stationary material. CNC machining is often performed on metals but can also be employed with plastics and composites.

CNC machining has revolutionized the manufacturing industry since it was first introduced in 1952 in the form of the Cincinnati Milacron Hydrotel. Since then, advanced robotics systems have been incorporated into the machines to dramatically improve productivity and ultimately reduce the labor requirements for the manufacturer of components.

This article will cover CNC machining's history, how CNC machining works, and some of the more common use cases for this process.

What Is CNC Machining?

CNC (Computer Numerical Control) machining refers to a type of subtractive manufacturing that is designed for manufacturing a part automatically by either advancing a spinning cutting tool mounted on a spindle into the work material (CNC mill) or by mounting the raw stock onto a spindle and moving it into a stationary tool (CNC lathe). The main function of a spindle in a CNC machine is to provide rotational motion to allow for the cutting of material.

An operator is required to set up the part to be machined by generating a list of instructions that tell the machine where to move the tool, at what speed, and how deep to cut the material per pass. This code was originally written by hand but is now handled by advanced software systems. Once the program instructions have been entered into the machine controller, the operator places the raw material into its starting position and initiates the machining sequence. The CNC machine then performs the planned manufacturing process steps. CNC machines have varying degrees of automation. Fully automatic machines can even load raw material and unload finished parts by means of a robot arm, as shown in Figure 1 below: 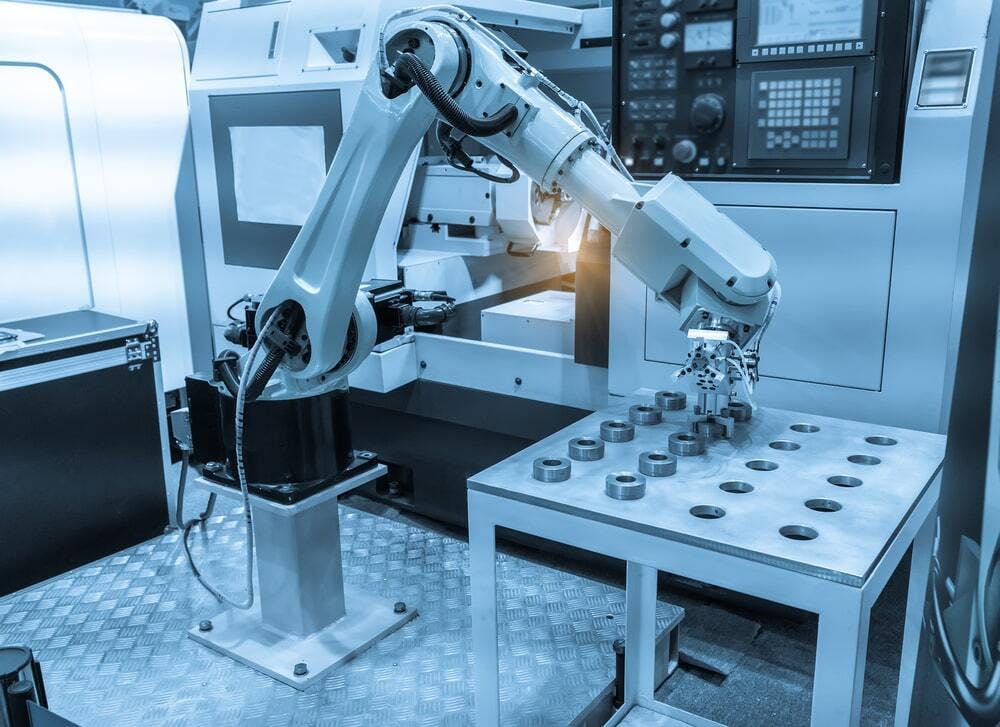 When Was CNC Machining Invented?

The first CNC machine was developed in 1952 by a team of researchers working at MIT (Massachusetts Institute of Technology). This advancement followed the development of the first NC (Numerical Control) machine in 1949. CNC machines were patented in 1958.

John T. Parsons was the first person to invent and build an NC (Numerical Control) machine. The NC machine was designed to operate directly off a set of punch cards that tell the machine where to move. This concept laid the groundwork for the further development of the CNC machine. A team of researchers working at MIT (Massachusetts Institute of Technology), led by J.F. Reintjes, developed the first prototype CNC milling machine. Richard Kregg then collaborated with MIT to develop the Cincinnati Milacron Hydrotel, the first commercially available CNC machine. Cincinnati Milacron became one of the first manufacturers of CNC machines.

Where Was CNC Machining Created?

Why Was CNC Machining Created?

The CNC machine was created to allow for the machining of complex shapes that could not be manufactured with traditional manual milling techniques. CNC machining allowed for mathematically developed profiles that trace out a complex non-linear curve to be machined, which would be difficult if not impossible to accomplish with manual machining.

What Is the Main Objective of CNC Machining?

The objective of CNC machining is to produce precise parts in a repeatable manner with as little human intervention as possible. This ultimately results in lower cost per part while maintaining high levels of quality.

What Existed Before the CNC Machine?

NC (Numerical Control) machines were developed before CNC (Computer Numerical Control) machines. NC machines were programmed with punch cards and later by magnetic tape. Ultimately, no computer is used, and the principal is similar to old automatic pianos that used punch card rolls to play music. These instructions were read by the machine, which then manufactured the part.

What Was the Earliest Use of CNC Machining?

The first use of the CNC machine was to machine helicopter blades using mathematically developed aerofoil shapes in 1949.

When Did CNC Machining Become Popular?

CNC machining began gaining popularity in the late 1960s. In 1976, the first CAD (Computer Aided Design) systems were made available that allowed for the creation of 3D models that were then used to develop machine G-code. This allowed easier access to CNC technology. By 1989, CNC machining was considered the standard for large-volume manufacturing and production.

What Impact Did CNC Machining Have on the World?

CNC machining has allowed increased manufacturing productivity by speeding up the machining process through automation. It has also allowed for increased quality and dimensional repeatability, ultimately creating more reliable and safer parts. CNC machining has also reduced the cost of manufacturing advanced components by reducing the overall labor requirements. , which ultimately allows manufacturers to offer products to consumers at a lower price point.

What Programming Language Do CNC Machines Use?

CNC machines make use of a programming language called G-Code (Geometry Code). This code is a relatively simple programming language that lists out a series of XYZ coordinates to where the tool must move and indicates the desired tool speed. There also exists a series of M-Codes (Machine Codes) that allow the operator to specify machine functions such as turning on coolant, changing a tool, and stopping the spindle, for example.

Yes, CNC machining is considered an advanced manufacturing technique because it automatically makes parts with little to no human intervention.

What Are the Different Types of CNC Machining Used Today?

CNC machining covers a very broad range of machines with different capabilities. However, at the most basic level, CNC machines can be broken down into CNC lathes and CNC mills. A CNC lathe will spin the material into a stationary cutting tool, whereas a CNC mill will spin the cutting tool into stationary material. It must be noted that many variations of these tools exist, with some performing the functions of a lathe and a mill in the same machine. The number of degrees of freedom is also used to classify the type of CNC machine. For example, a 3-axis CNC machine can move the tool back and forth on the XY plane, as well as up along the z-axis. For more information, see our guide on the 12 Types of CNC Machines.

What Is the Difference Between NC and CNC Machining?

NC (Numerical Control) refers to the process of programming a machine with a set of machining instructions either on a punch card or on a magnetic tape. NC was developed in 1949 and is the predecessor to modern CNC (Computer Numerical Control). A machine will be said to have CNC control if it takes in a set of computer-generated codes to tell the machine where to move the tool and at what speeds in order to machine the final part.

The article reviewed the origins and history of CMC machining and its evolution from NC machining. To learn more about CNC machining and how you can use it for your projects, contact a Xometry representative.