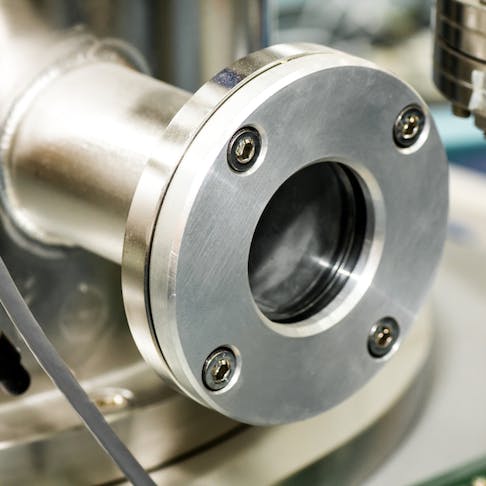 What Are Blind Holes in Engineering and Machining?

Learn more about the uses of blind holes in machining.

A blind hole refers to a hole that does not pass completely through a part, i.e., it is only drilled, reamed, or milled to a depth that is a fraction of the total part thickness. The depth of a blind hole is usually determined by the threading requirements of the fastener to be used for the specific application.

This article will describe what blind holes are, how to drill and tap them, and what callout to use when indicating a blind hole on a drawing. Other types of holes are listed here for comparison.

How To Drill a Blind Hole

The hole depth must be determined by the optimal thread engagement of the fastener being used plus an additional depth to allow the tap to thread to the correct depth. A blind hole can be drilled in many different ways. A hand drill can be used, however, it is difficult to drill a perpendicular hole with a hand drill, and drilling to an exact depth is also difficult. A piece of tape wrapped around the drill bit can serve as a depth indicator. Alternatively, some hand drills have a depth indicator that extends from the front of the drill to physically stop the drill from going too deep.

A drill press is a more suitable tool for drilling blind holes than a hand drill. It is able to drill perpendicular holes whereas a hand drill is not due to being hand operated which introduces a lot of inaccuracies. In addition to this, its depth indicator can be used as a visual guide to ensure that the hole is drilled to the correct depth and that the drill base is perpendicular to the drill axis.

The most advanced method of drilling a blind hole would be by making use of a CNC mill, CNC drill, or lathe, lathes allow for a drill to be placed in the tailstock and the spinning material is introduced into the stationary drill. This method produces the most accurate holes. If precise holes are required then the hole can be slightly undersized and a reamer can be used to finish the hole.

Regardless of the method used for drilling a blind hole, it is important to ensure that cutting fluid is supplied to the drill and that chips are evacuated continuously. This is usually done by backing the drill out of the material every so often to carry the chips out of the hole. Failure to do this can damage the drill or even get it stuck in the hole and break it.

Choosing the Right Tap for a Blind Hole

Blind holes can be tapped manually or on a CNC machine. Every thread size has a companion drill size that must be used. For example, an M10 bolt would require an 8.8 mm drill bit to allow the tap sufficient material to cut a full thread into the hole. Bottoming taps with a flat bottom are best suited to blind holes. There are many drill tap tables available online that indicate the hole to be drilled for a corresponding thread size.

As with drilling, it is important to evacuate chips during tapping, as taps can very easily break if chips aren’t removed. It is also important to keep the tap perfectly aligned with the hole’s central axis.  Alternatively, a roll tap can be used to eliminate the chip problem. Roll taps cold form the threads, pressing them into the hold walls instead of cutting them.

How To Clean Blind Holes

When drilling blind holes, it is important to clean out the chips, as these can cause a range of problems, like increased drill wear and drill breakage. During drilling, a high-pressure stream of liquid coolant or air can be used to blow the chips out of the hole. The drill flutes will not be able to efficiently remove chips if the hole becomes too deep. After drilling, the holes must be cleaned again to remove any leftover debris. In this case, a hand-operated air gun can be used. For best results, a specialized hand-held hole cleaner can be used to simultaneously blow compressed air into the hole and suck the blown-out debris into an enclosed container.

When drilling blind holes for tapping it is important to drill to the correct depth to allow the tap to have enough space to cut or form the required number of threads. This ensures that the fastener has enough thread engagement for maximum holding strength while also having enough clearance beyond this for the tap. The hole depth will depend on the type of tap used. For example, a taper tap will need a deeper hole than a bottom tap or spiral flute tap for the same number of threads as it has a longer point and lead-in before it is able to cut a full-depth thread, these taps are also better suited to hand tapping. The formulas shown below can be used as general guidelines:

For holes with a depth twice the diameter of the fastener, the tap depth should be:

For other holes the tap depth should be:

What Is the Callout Symbol of a Blind Hole?

The callout symbol for a blind hole is shown in the upper right corner of Figure 1 below: 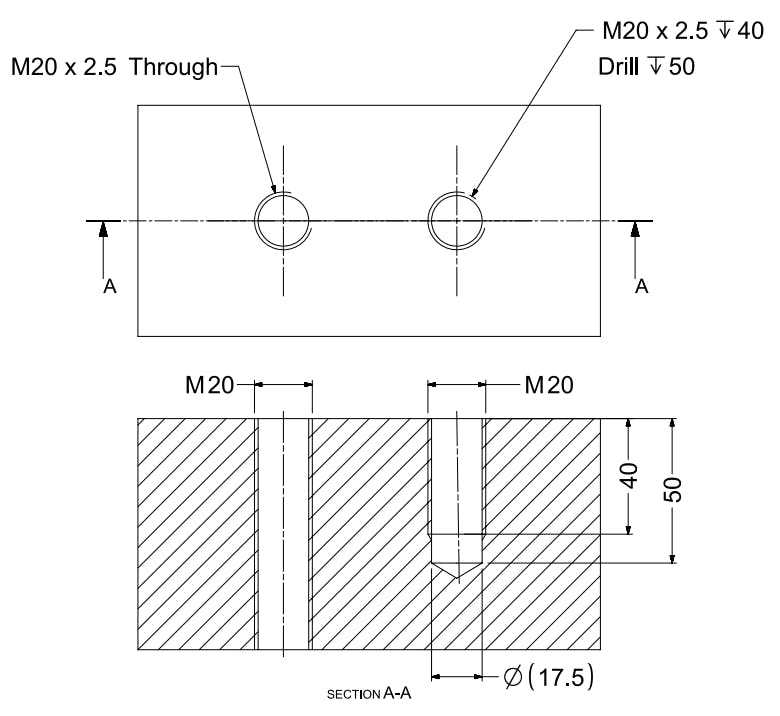 A through-hole passes all the way through the thickness of a part, unlike a blind hole, which stops short of full penetration, as shown in Figure 1 above.

What Are Other Types of Holes in Engineering and Machining?

Different applications may require different hole types. The holes listed below can be through holes or blind holes:

For more information, see our guide on Types of Holes in Engineering.

This article presented blind holes, explained what they are, and discussed when they are used in engineering and machining. To learn more about blind holes, contact a Xometry representative.

Xometry provides a wide range of manufacturing capabilities, including CNC machining and other value-added services for all of your prototyping and production needs. Visit our website to learn more or to request a free, no-obligation quote.