The Xometry app works best with JavaScript enabled!
ResourcesMaterialsAll About Polypropylene: How it's Made and Used 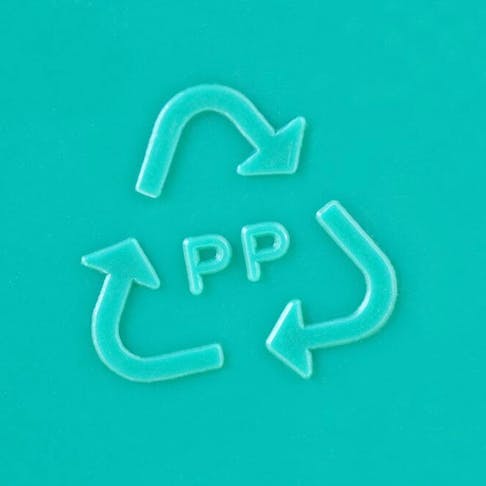 All About Polypropylene: How it's Made and Used

Polypropylene is a semi-rigid, cost-effective, and tough thermoplastic linear hydrocarbon polymer resin that offers excellent chemical, electrical, and fatigue resistance at high temperatures. It is considered a hazard-free plastic and as such, it is used for the production of products ranging from plastic furniture and machinery to pill containers and syringes. Despite its versatility, customizability, and strength, this material has some disadvantages as well, such as its proneness to oxidation, high flammability, and sensitivity to chlorinated solvents and aromatics.

Polypropylene (PP) is a low-density, stress-resistant thermoplastic made from a propene (or propylene) monomer. The chemical formula for this linear hydrocarbon resin is (C3H6)n. It was discovered in the mid-1950s by Italian scientists and is today the second most manufactured plastic after polyethylene.

Polypropylene is a thermoplastic material and as such, it can be heated to its melting point, chilled, and then reheated again without any significant deterioration. This property, together with its ability to liquefy instead of burn when subjected to high temperatures, are two critical attributes that make polypropylene a popular choice for manufacturing applications such as injection molding. Some other characteristics of this material are:

How is Polypropylene Made?

Polypropylene is made by polymerizing propylene gas using a catalyst system, commonly a Ziegler-Natta or metallocene catalyst. The polymerization parameters, including temperature, pressure, and reactant concentrations, are determined according to the desired polymer grade. Several different manufacturing methods may occur in either gas-phase or liquid-phase process:

What Are the Uses of Polypropylene?

Polypropylene is used in a range of industries including packaging, material handling, and consumer goods:

Because of its chemical resistance, weldability, and other valuable properties, this material finds its place in numerous industries; the medical, automotive, packaging, electrical, construction, and food industries to name a few. The packaging industry uses polypropylene as a substitute for paper and cellophane, mostly due to its low cost and flexibility. Pallets, bottles, jars, yogurt containers, hot beverage cups, and food packaging are some of the products made with this material. Polypropylene is also frequently used in the automotive industry to produce batteries, bumpers, instrument panels, interior elements, and door trims. Because of its chemical, bacterial, and steam sterilization resistance, polypropylene is employed in a variety of medical applications as well, such as disposable syringes, diagnostic devices, Petri dishes, intravenous bottles, and pill containers.

Even though there are several different ways to process polypropylene and plastics in general, injection molding is the most dominant manufacturing procedure. Polypropylene responds swiftly to injection speed and pressure, and it forms up quickly in the mold, allowing molders to achieve high production rates. Due to its mix of performance attributes, this polymer has a critical position in the injection molding market.

What Are the Advantages of Using Polypropylene?

What Are the Disadvantages of Using Polypropylene?

How Does Polypropylene Affect Human Health?

Polypropylene doesn't affect human health except as potentially a mild irritant. Polypropylene is BPA-free plastic and is considered a better alternative than other plastics, especially in the foodservice and packaging industries. Some other plastics contain BPA (Bisphenol-A) or other toxic chemicals which can harm our bodies or the environment.

Despite being considered safe, potential health issues might arise if, for example, the material's powder gets in contact with a person's eyes or skin, since it may cause irritation. Moreover, PP ingestion might cause minor gastrointestinal discomfort and disruptions. Inhalation of particles might also cause problems, i.e., respiratory irritation. However, polypropylene is considered the safest plastic because these possible health risks are unlikely to happen.

Polypropylene is not toxic according to the Food and Drug Administration (FDA). This is since it is not known to cause cancer or any other serious condition that may affect human health. Therefore, the FDA has approved the use of this polymer as a food and beverage container material.

There is some new research that suggests polypropylene can affect androgen hormones, depending on the way it’s manufactured. There is other evidence food containers can leach endocrine-disrupting chemicals when exposed to heat or food with high acidity, or over long periods. However, there has not been enough research to confirm these findings enough for the FDA and EPA to change their recommendations.

What Is the Difference Between Polypropylene and Polystyrene?

What Is the Difference Between Polypropylene and Polyester?

The difference between polyester and polypropylene is that polyester can absorb some water whereas polypropylene cannot. Both polypropylene and polyester are polymer materials but are utilized in different scenarios depending on the chemical and physical properties that the final product should have. Let us now take a look at a brief outline of these two materials' key characteristics which separate them from one another:

Due to its flexibility, durability, chemical resistance, and other important properties, polypropylene has found its applications in many different industries, with the packaging industry being its number one user. This BPA-free thermoplastic polymer is not considered to be hazardous to human health, but it might deteriorate or even leach chemicals when extensively exposed to UV rays or extremely high temperatures. There exist several different molding processes for plastics manufacturing, but polypropylene is primarily processed with the injection molding technique.

Need polypropylene injection molding for your parts? Xometry's experts can help! Get a quote on your designs today!

The content appearing on this webpage is for informational purposes only. Xometry makes no representation or warranty of any kind, be it expressed or implied, as to the accuracy, completeness, or validity of the information. Any performance parameters, geometric tolerances, specific design features, quality and types of materials, or processes should not be inferred to represent what will be delivered by third-party suppliers or manufacturers through Xometry's network. Buyers seeking quotes for parts are responsible for defining the specific requirements for those parts. Please refer to our terms and conditions for more information.

Gracija Nikolovska
Gracija Nikolovska is a recent graduate from the Faculty of Computer Science and Engineering in Skopje, North Macedonia. She is currently working as a Data Scientist in a start-up company located in Skopje. Moreover, she is an active member of the Rotaract Club Center Skopje, which enables her to help the community and create a better world, one step at a time. One of Gracija’s main interests has always been writing, thus she has experience in various writing niches and styles, from technical to creative. Gracija is the author of the publication “Importance of e-governance and its development in European countries and in the Republic of North Macedonia” and is currently working on a research paper for the diagnosis and analysis of dementia-related illnesses.