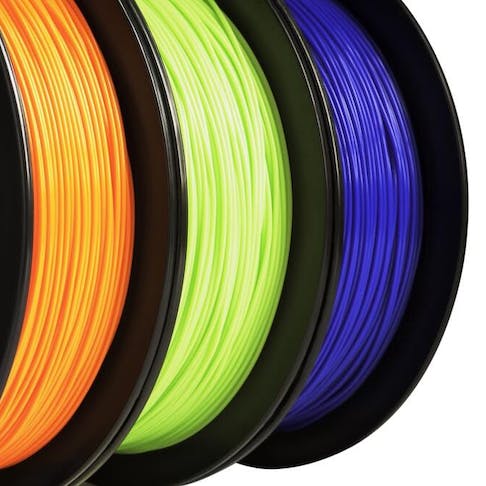 PLA vs. PLA+: Differences and Comparisons

When deciding between PLA (polylactic acid) and PLA+ filaments, it can be difficult to discern which one is best for your project. While the two materials have many similarities, they also have three notable differences—mechanical properties, ease of printing, and cost. PLA is the most commonly used filament in fused deposition modeling (FDM) 3D printers. It’s affordable, readily available, and easy to print. However, it lacks the mechanical strength for use under load-bearing conditions compared to PLA+. PLA+ is an augmented version of PLA. PLA+ contains additives and modifiers that make it stronger and tougher, with better layer-to-layer adhesion than conventional PLA. While those additives make for a more useful material, they also make PLA+ more expensive.

This article will dive deeper into the differences between PLA and PLA+, and present comparisons of the two materials to help you understand which material is best for your project.

PLA Definition and Comparison to PLA+

PLA is one of the most commonly used thermoplastics. Unlike other thermoplastics, typically petroleum-based, PLA is made from lactic monomers extracted from natural crops like corn or sugarcane. Polylactic acid was first synthesized through polycondensation in 1845 by Théophile-Jules Pelouze. In 1932, Wallace Hume Carothers and his team synthesized PLA into a polymer material. Dupont later patented this process in 1954.

Since it’s derived from natural sources, PLA is eco-friendly and biodegradable. It has characteristics similar to polypropylene (PP) or polyethylene (PE). PLA can be used in 3D printers, injection molding machines, and extruders. PLA is preferred over PLA+ for general-purpose 3D printing because it’s easy to print, doesn’t require a heated build platform, and is highly affordable.

What Are the Advantages of PLA Compared to PLA+?

Listed below are some advantages of PLA vs. PLA+:

What Are the Disadvantages of PLA Compared to PLA+?

Listed below are the disadvantages of PLA vs. PLA+:

PLA+ Definition and Comparison to PLA

PLA+ is derived from standard PLA, made by the addition of modifiers during PLA synthesis. Several types of PLA+ are produced by various companies. The exact formulation by which manufacturers make their versions of PLA+ are trade secrets. Therefore, there is no one specific PLA+ composition.

PLA+ eliminates some of the negative characteristics of standard PLA. It has improved strength, ductility, and flexibility compared to PLA. This makes PLA+ great for parts requiring mechanical strength in load-bearing applications. PLA+ can tolerate higher temperatures than standard PLA. This characteristic makes it possible to use PLA+ in hotter service environments. PLA+ printed parts also tend to have a smoother surface and better cosmetic appearance than standard PLA-printed parts because the surface is less porous and less rough.

What Are the Advantages of PLA+ Compared to PLA?

Listed below are the advantages of PLA+ vs. PLA:

What Are the Disadvantages of PLA+ Compared to PLA?

Listed below are the disadvantages of PLA+ vs. PLA:

Comparison Table Between PLA and PLA+

Table 1 below shows a comparison of different attributes and properties of PLA vs. PLA+:

Though PLA and PLA+ have many similarities, they differ in mechanical performance and friendliness to the environment since PLA is made from starch and sugar while PLA+ has additives. PLA is brittle and weak. PLA+ is stronger, more flexible, and more ductile. The use of additional fillers/additives makes PLA+ have greater heat resistance than standard PLA. PLA+ materials are used in high-temperature environments—so long as the temperature doesn’t exceed its glass-transition temperature of 130 °F.

Both PLA and PLA+ are commonly used in non-dyed food packaging (mostly for short shelf-life products), medical products (such as implants) due to their biocompatibility, and textiles. However, PLA+ can also be used in automotive applications, for interior trim, door panels, and floor mats. PLA is great for low load-bearing applications and moderate temperature environments. PLA+ can be used in similar applications where higher strength and flexibility or greater heat resistance is desired.

PLA-printed parts have a relatively rough surface texture due to the extrusion process used for printing. Smooth, shiny surfaces can only be achieved on PLA parts with post-processing. PLA+ printed parts tend to have smoother, glossier surfaces as printed.

PLA has a higher degree of biodegradability than PLA+ because PLA is derived from plant materials such as cornstarch and sugarcane. PLA+ is also biodegradable to a certain extent. However, because of the additives used to make PLA+, it may not be as environmentally friendly as standard PLA. It is recommended to check the material safety data sheet of the PLA+ grade you’d like to purchase if biodegradability is an important consideration.

Though PLA+ contains additives not used in standard PLA, PLA+ is not toxic. This is because the additives used in PLA+ are non-toxic elastomers such as TPU (thermoplastic polyurethane). Toxicity levels are then approximately the same between PLA and PLA+.

PLA+ tends to be more expensive than standard PLA due to the addition of special-purpose modifiers in PLA+. Standard PLA costs about $15 to 20 per kg of filament. PLA+, on the other hand, starts at $25 per kg and can be as much as $35 per kg.

What Are the Mutual Alternatives to PLA and PLA+?

The mutual alternatives to both PLA and PLA+ include:

PETG and ABS are plastics that are often used in FDM printers. Their material properties are similar to those of PLA and PLA+. Both PETG and ABS have about the same mechanical strength as PLA+. Additionally, they are relatively easy to print and can be used for functional parts.

What Are the Similarities Between PLA and PLA+?

Similarities between PLA and PLA+ include:

What Are the Other Comparisons for PLA Besides PLA+?

Listed below is another comparison for PLA besides PLA+:

What Are the Other Comparisons for PLA+ Besides PLA?

Listed below is another comparison for PLA+ besides PLA:

To learn more about PLA and PLA+ filaments and how they can be used for your application, contact a Xometry sales representative or use Xometry’s quoting tool today.

This article contrasted PLA and PLA+, both of which are commonly used 3D printing materials. To learn more about which plastic is better and how Xometry can assist material selection, contact a Xometry representative.

Xometry provides a wide range of manufacturing capabilities including 3D printing and value-added services for all of your prototyping and production needs. Visit our website to learn more or to request a free, no-obligation quote.