Case Study: how this company invented a groundbreaking tool for veterinarians

For over two decades, Meadowcroft worked for companies like Ethicon Endo-Surgery, a division of Johnson & Johnson, introducing surgical tools for minimally invasive surgery. The techniques, frequently referred to as laparoscopic surgery, have become the standard of care in human medicine. Rather than using large incisions to see anatomy inside a patient, they now use a tiny camera that fits down in an incision the size of a straw. This approach, according to one study, “has revolutionized surgical care, significantly reducing postoperative pain, recovery time, and hospital stays.”

In April 2013, Meadowcroft launched a company called vetOvation that would take these minimally invasive perfected for humans and apply them to animals. Based in North Carolina, vetOvation sells laparoscopic and endoscopic tools to veterinarians and provides training on how to use them. This is how, in 2014, he ended up giving a talk at North Carolina State University.

“I hadn’t been on a college campus in 20 years,” Meadowcroft recalled in an interview. “And when I walked in with my slide projector, the person that was there to greet me said, ‘Well you can put the slide projector back in your car because you won’t need those.’ And then we walked into this auditorium that had an LCD projector and multiple flat screens TVs .” He was amazed by how much things had changed, technologically, since he had been in school. “So I started off my talk with: ‘Wow, I’m really impressed with your campus. When I was a college student and had to sign up for classes, I had to go to the library and use the main frame computer, and you guys probably sign up on your smart phones. Twenty years ago when I started my career, surgeons performed many procedures through large incisions so they could put their hands inside the patient to move anatomy around so they could then see it with their eyes. Fast forward 20 years and the majority of those procedures are performed in a minimally invasive fashion through tiny incisions with specialized instruments.” Meadowcroft then commented that in the student’s future career as veterinarians they would probably perform procedures on their iPhones. 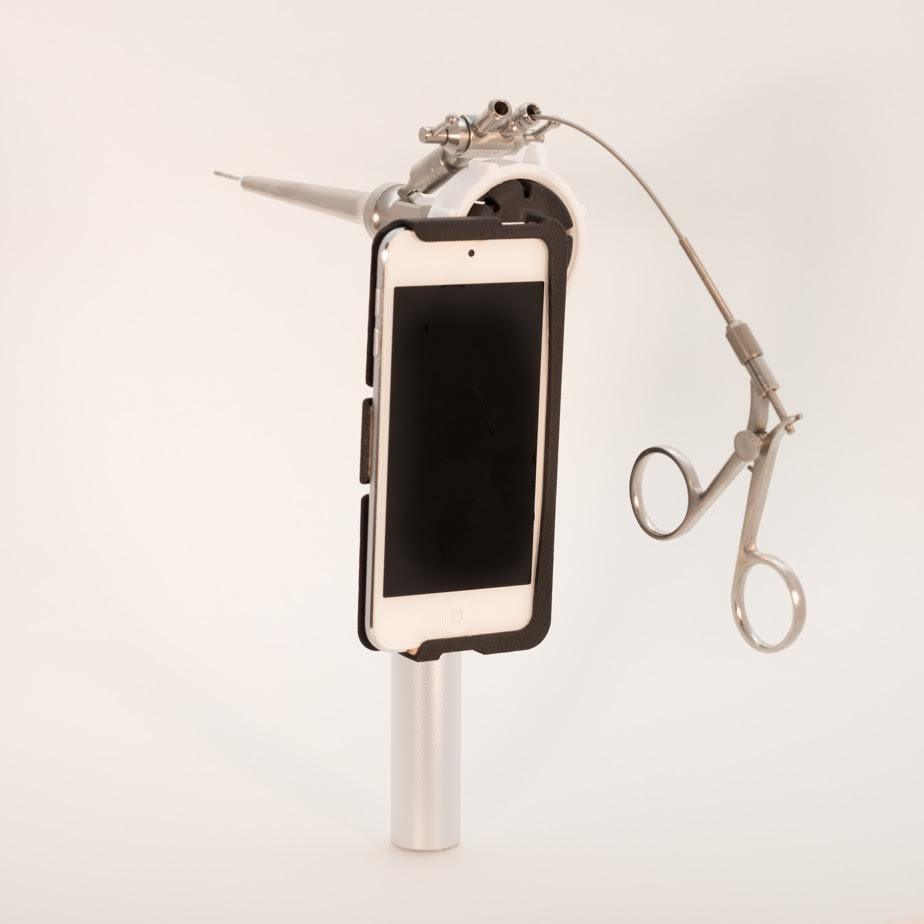 The prediction was off-the-cuff and Meadowcroft was only half-serious, but a student sitting in the audience named Catie McVey took him completely seriously. “She came up to me and was like, ‘Hey, I use CAD modeling and design iPhone cases for friends. Why couldn’t you use your iPhone and attach a scope to it?’ And I replied, ‘I don’t know, I never thought of that.’ And she said, ‘Well, I could design one for you.’”

What’s an otoscope? If you’ve ever gone to the doctor because of an ear infection, they likely used one to look inside your ear. It’s cone-shaped and shines a light to illuminate your eardrum. Veterinarians, when looking inside the ears of dogs and cats, typically use an otoscope designed for humans. “If you take your finger right now and put it into your ear, you would get just past the opening and immediately be at your eardrum,” said Meadowcroft. “If you put your finger in a dog’s ear, depending on the species, you could advance your finger about three inches before touching the eardrum, versus human ears where you will get to the ear drum in half an inch.” Using a traditional otoscope, then, a veterinarian often can’t even see the infected area. Having to put their eyes up to the screen of the otoscope also places their faces within biting range of the dog’s snout.

What McVey was proposing was to create a scope that looks into a dog’s ear and projects the image onto an iPhone screen. Not only would this give the veterinarian a clearer look at a safer distance, but they could also snap video or images to show to the dog’s owner or a colleague. When she saw Meadowcroft a few weeks later, she told him she’d created a CAD design of the tool. She also informed him that NC State had a 3D printer they could use to produce a prototype for just $20. “I was like, ‘Holy cow, here’s $25, go print one of these things off,’” he said. A couple days later she came back to him with the first prototype. “I had never done 3D printing before, and while it was definitely a first-generation version that needed to be improved, it was amazing that she could do that.”

They knew they were onto something truly innovative, but both realized pretty quickly that some of the intricate design work needed someone with more experience. So McVey asked one of her NC State University engineering professors Parks Newby to participate in the project. Newby, a product development consultant, was immediately able to advance the design of the vetOvation video scope.

There was only one problem: VetOvation would need to test multiple prototypes for each generation of the iPhone (and would have to continue to do so into perpetuity). For each iteration they would need to create a mold. “I’ve got to make molds for the iPhone 4, 5, 6, 6+, and iPod Touch,” he said. “And let’s say at bare minimum it costs $5,000 per mold. So it’s costing me $30,000. But then you also have to consider that we went through six generations of the product before we got to what we use today; we modified this, we tweaked that. If you make a mold and then want to make a change to it, it’s now obsolete and you have to throw it in the garbage and make another one.” These R&D costs would make it nearly impossible for vetOvation to sell the video scope at a competitive price.

The obvious solution would involve 3D printing the prototypes, but when they tried this the prototypes kept breaking. “I was devastated,” said Meadowcroft. But then Parks came across Xometry, which was able to print the products at a very affordable rate on an extremely durable material.

It wasn’t long before Meadowcroft could introduce the video scope to his customers. Courtney Pierce, DVM a veterinarian at The Animal Hospital at Lake Brandt in Greensboro, NC was one of those customers. She’s a veterinarian that treats cats and dogs daily that have issues that need to be diagnosed by seeing the anatomy inside the ear or nose. “I met Les about two years ago,” she said in an interview. “We were installing his laparoscopic equipment for pets, and the video scope just happened to be one of the tools he had which we decided to add to our practice portfolio.”

The usefulness of the tool became apparent to Dr. Pierce almost immediately. Though she wouldn’t consider herself a tech person, she found adoption easy because it involved utilizing a tool she was already familiar with: her iPhone. And not only did the video scope improve her treatment of pets because she could get a better view of the insides of their ears, it also improved her communication with the pets’ owners. “Traditionally, the client can’t see what I see,” she explained. “Usually, I would just tell them the dog’s ears look bad, and you kind of hope they take you seriously. But this way when you put that device in there, you’re putting up an image in real time that the client can observe with you. And I can’t tell you how many times they’ve said, ‘Oh my, it looks so bad!’ And they really understand what we’re trying to tell them. The visual is fantastic for getting people on board.” She found it especially useful when clients dropped off their pets while they went to work and then came back. “I could just record the images or video and email it to them.” 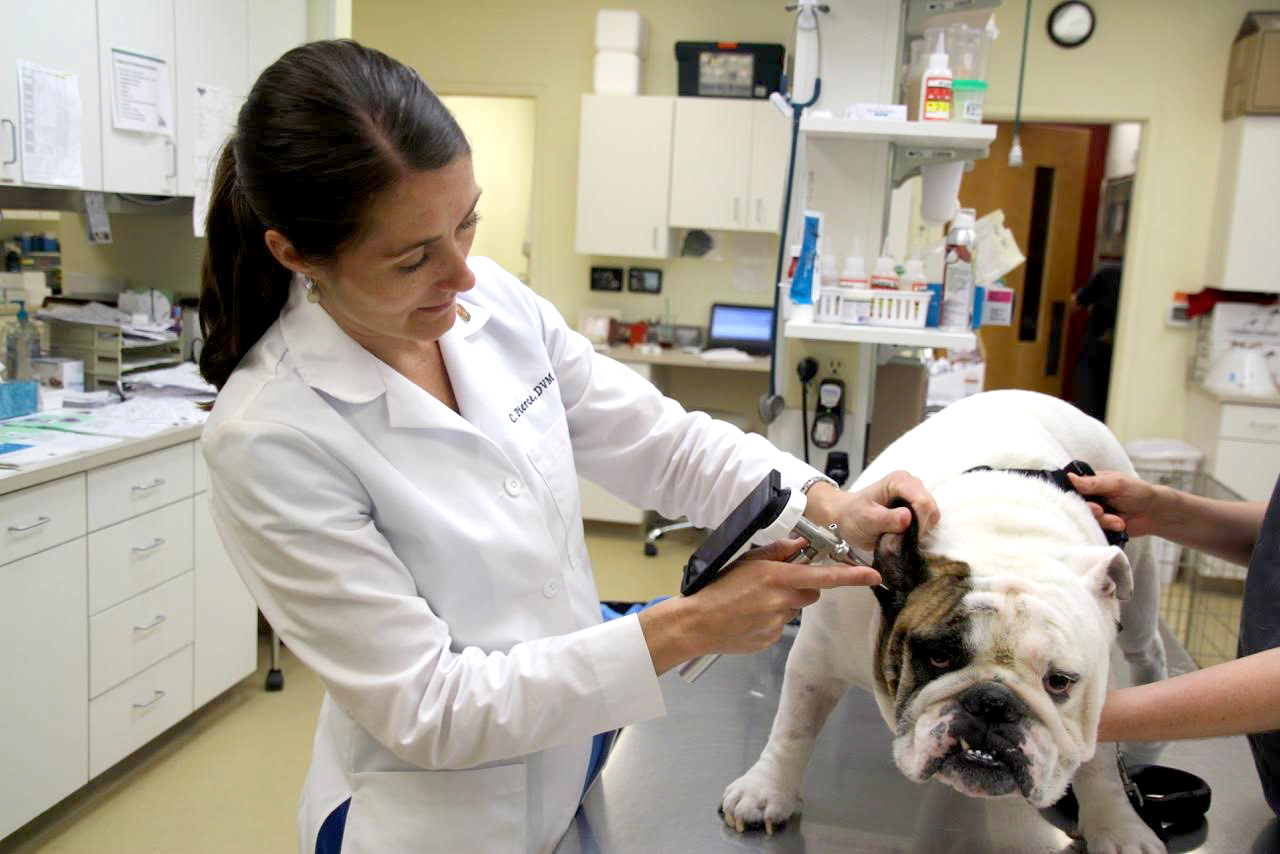 There is, of course, an already-existing machine with similar functionality, but it costs over $25,000, and most small veterinarian clinics can’t justify the cost. VetOvation’s video scope system sells for $1,650 and he’s able to keep his costs low because of 3D printing. “I have 10 of each version on my shelf,” he said. “When I get down to five, then I just place another order at Xometry and bring it back up to 10.”

It isn’t lost on him that it wasn’t that long ago when this level of production would be possible. “If Apple comes out tomorrow with the iPhone 7, I will be able to prototype and 3D print an adapter, whereas if I have to make a mold, I would have to plop down an initial $5,000 to $10,000. And then to mass produce them I would probably have to order a minimum to 500 to 1000 adapters in multiple sizes. So the costs of getting the molds made is huge. As a small business, it isn’t feasible. Without 3D printing, this product couldn’t exist.”

BMW tooling engineers can use Xometry’s CNC machining, 3D printing, and urethane casting for custom assembly fixtures, which allows the company to put the finishing touches on its vehicles quickly and cost-effectively.