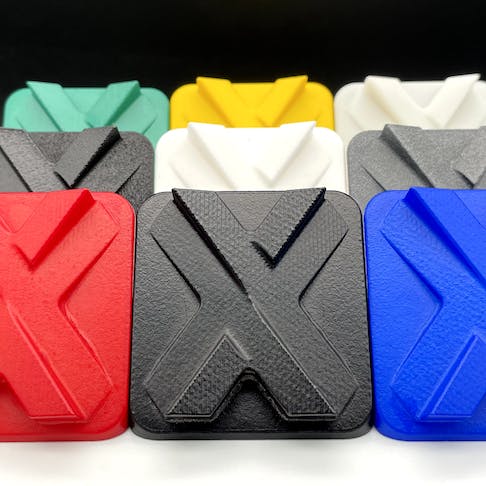 SLS vs. MJF: Differences and Comparison

SLS and MJF are powder-bed fusion technologies that create 3D parts from a  thermoplastic powder. Selective laser sintering (SLS) uses a laser to melt and fuse powder grains, whereas multi-jet fusion (MJF) employs a fusing agent, heat, and infrared light to fuse the powder. SLS can employ a more comprehensive selection of materials – many of which can be dyed – whereas MJF creates better isotropic properties at a slightly higher print resolution. MJF is ideal for smaller functional parts, while SLS is the better choice for visual prototypes and medium-sized functional parts. Both styles are similar in terms of printing cost and speed, though MJF is cheaper for larger production volumes.

This article will compare SLS vs. MJF and outline their differences, materials, and printing technology.

SLS Definition and Comparison to MJF

SLS (selective laser sintering) is a powder-bed 3D printing technology for thermoplastic materials. It was first invented by Dr. Carl Deckard and Dr. Joe Beaman in the mid-1980s. This process works by selectively sintering a plastic powder with a laser beam (typically a CO2 laser). The laser beam traces out successive cross-sections of a part and sinters the plastic particles as it moves. After each layer, the print bed moves down, and another layer of powder is applied. Sintering refers to the process of heating the plastic particles to the point where their outer surfaces begin melting. This causes the individual particles to stick together. SLS technology is a much more mature technology than MJF and functions on a wider range of materials. Below is an image of a typical SLS machine: 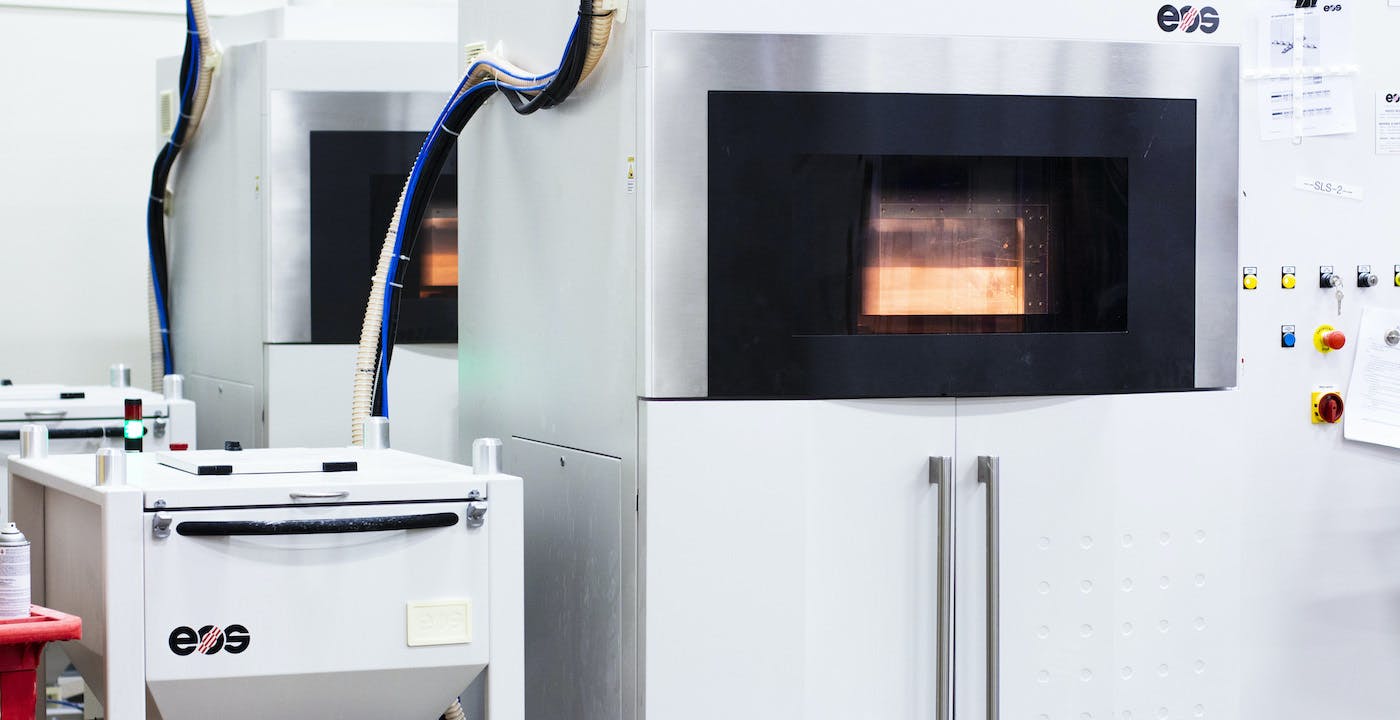 What Are the Advantages of SLS Compared to MJF?

Listed below are some key advantages of SLS vs. MJF:

What Are the Disadvantages of SLS Compared to MJF?

Listed below are some key disadvantages of SLS vs. MJF:

MJF Definition and Comparison to SLS

MJF (multi-jet fusion) is a powder-bed 3D printing technology that was developed by Hewlett-Packard in 2016. It employs a multi-step process. A thin layer of powder is first laid down on the print bed. The powder is then heated to just below its sintering temperature. Next, a fusing agent is applied to the powder in the shape of the part’s cross-section. A detailing agent is then applied to the edges of the part to help create crisper and sharper edges. Finally, an infrared heat source passes over the plastic and sinters the treated plastic particles. MJF is a more advanced technology geared towards high production rates than SLS. The image below shows an MJF printing process: 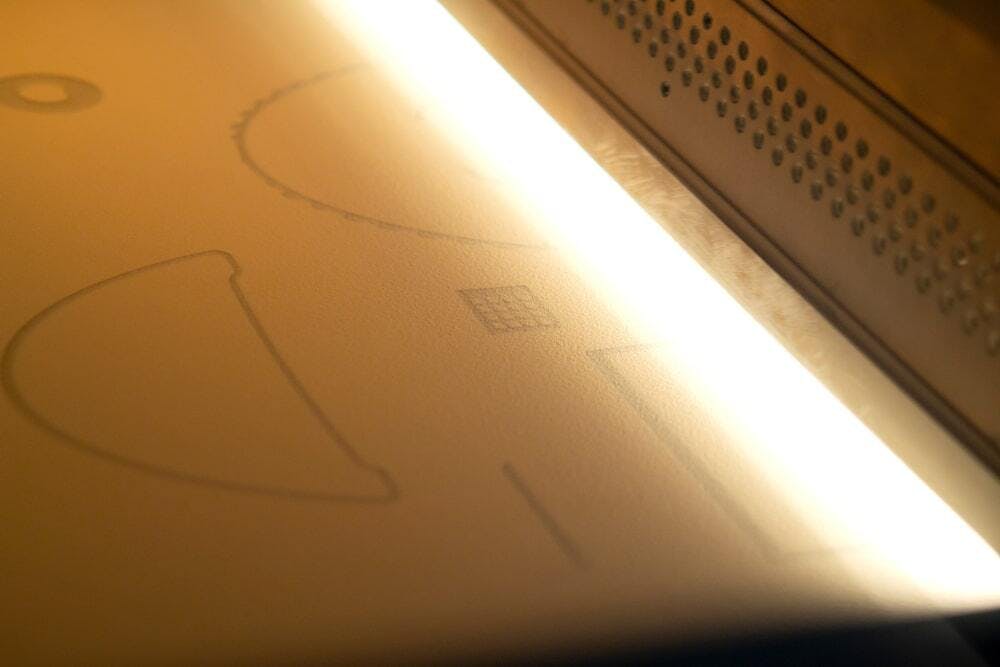 What Are the Advantages of MJF Compared to SLS?

Listed below are some key advantages of MJF over SLS:

What Are the Disadvantages of MJF Compared to SLS?

Listed below are some key disadvantages of MJF vs. SLS:

Comparison Table Between SLS and MJF

The table below lists some of the more common properties of SLS vs. MJF as well as how they compare with each other:

MJF can produce higher-resolution parts of the two, and its raw material is significantly more isotropic and recyclable. SLS machines are available with larger build volumes, though.

SLS and MJF are both powder-bed fusion technologies. Powder bed fusion (PBF) means that parts are cumulatively built up one layer at a time by fusing powdered thermoplastics. SLS uses a CO2 laser to fuse the particles. Meanwhile, the MJF process depends on an infrared heat source, preheated powder, and a specialized fusing agent that all work together to fuse the particles.

SLS and MJF are used to create functional parts such as casting patterns, medical devices, and elastomeric parts. The parts made using MJF are typically stronger because they are almost entirely isotropic. Regarding aesthetics, MJF products have a dull, uneven gray color and can only accept black dye. However, SLS parts can be built or dyed with many colors, making them ideal for visual prototypes. Overall, MJF offers slightly better mechanical properties than SLS.

SLS machines have larger build volumes when compared to MJF. SLS can print more nested parts in a single run with a larger build area. Large 3D-printed parts can often warp, but it’s more of a problem for MJF processes than SLS. With SLS printing, it is important to utilize as much of the build volume as possible because so little of the powder can be recycled.

SLS and MJF parts both have a characteristic rough/matte surface finish. However, in both cases, technicians can smooth the surfaces via bead blasting, air blasting, tumbling, or water blasting. Chemical vapor smoothing has recently allowed both SLS and MJF parts to achieve a sealed, semi-gloss surface at low costs.

SLS and MJF have similar print costs when scaled up. However, MJF becomes cheaper when scaled up compared to SLS. MJF is more competitive because the printing process is slightly faster and the unused material more recyclable. The table below shows the price comparison for SLS vs. MJF:

What Are the Mutual Alternatives to the SLS and MJF?

Despite the benefits of SLS and MJF, below is an alternative technology that can achieve similar results:

What are the Similarities Between SLS and MJF?

Listed below are some of the similarities between SLS and MJF:

What are the Other Comparisons for SLS Besides MJF?

Besides MJF, other 3D printing processes similar to SLS include:

What Are the Other Comparisons for MJF Besides SLS?

Besides SLS, other 3D printing processes similar to MJF include:

This article summarized the differences between SLS and MJF 3D printing technologies.

To learn more about SLS vs. MJF and to help select the perfect technology for your products, contact a Xometry representative.

Xometry offers a full range of 3D printing services for your project needs. Visit our Instant Quote Engine for a free, no-obligation quote in minutes.

The content appearing on this webpage is for informational purposes only. Xometry makes no representation or warranty of any kind, expressed or implied, as to the information’s accuracy, completeness, or validity. Designers should not infer performance parameters, geometric tolerances, specific design features, quality and types of materials, or processes to represent what will be delivered by third-party suppliers or manufacturers through Xometry’s network. Buyers seeking quotes for parts are responsible for defining the specific requirements for those parts. Please refer to our terms and conditions for more information.