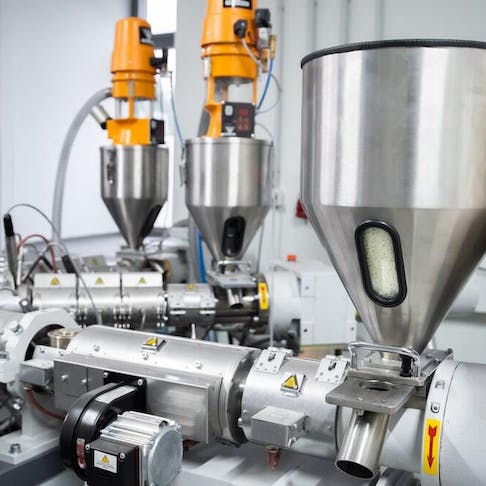 Learn more about this process and how it is used in 3D printing.

In the context of 3D printing, extrusion is the process whereby a semi-liquified slurry or paste is squeezed through an orifice or die to make a cylindrical (or other) shaped line of the material. It then hardens or cures, allowing a new layer of extruded material to be laid on top. Both fused deposition modeling (FDM) and fused filament fabrication (FFF) print using this technique.

Though S. Scott Crump’s first version of the FDM process used a glue gun, the technology has been refined to become far more precise and flexible. Material extrusion can employ a wide variety of materials such as polymer filaments, polymer pellets, wax filaments and pellets, ceramic slurries, and polymer bonded metal powder filaments.

This article will define and discuss the process, history, and applications of material extrusion as it relates to 3D printing.

What Is Material Extrusion In 3D Printing?

In the realm of 3D printing, the extrusion process means pushing bond-ready material through a heated nozzle in order to deposit it in successive layers. Each layer is effectively a 2D “slice” of the 3D object. Most printers heat either a polymer or wax to a gel-like state in order to make the material printable. Those materials may be modified with additives that give them desirable properties in either the gelled state (i.e. viscosity controllers) or the solid state.

For more information, see our guide on what to know about 3d printers.

What Materials Are Used in Material Extrusion?

Material extrusion machines can be designed to print the following:

Where Is Material Extrusion Used?

Material extrusion is primarily used in FDM prototyping. This additive manufacturing method is more popular than others for this purpose because it is the cheapest, most accessible option. FDM prototypes are used in various industries, including marketing and product development. The parts are produced quickly and are usually functional enough for developers to test features (as long as they’re no smaller than 1-2 mm). The prototypes are not high-performance pieces, though.

When Did the First Material Extrusion Technology Emerge?

The material extrusion technology was first predicted by a science fiction author, Murray Leinster in his 1945 short story ‘Things Pass By.’ The real process, however, took practical form in the late 1980s and was commercialized by Stratasys. This became the backbone of the 3D printing sector.

What is the Registered Name for Material Extrusion?

Stratasys registered material extrusion under the name “fusion deposition modeling,” or FDM. Though the patents have expired, they still have rights to the name, though Stratasys does not appear to police it closely. Many other manufacturers call their process “fused filament fabrication” (FFF) even though the FDM moniker is more widely understood.

What Is the Material Extrusion Process?

Material extrusion in the 3D printing realm involves forcing polymer or wax feedstock through a temperature-controlled nozzle. This softens the material to a viscous fluid or near-fluid state so it can be applied to a build table or existing printed model layer. Each layer is effectively two-dimensional, but they combine to create a 3D construction.

The polymer (or wax) is heated in the nozzle until it reaches a gelled state. The material should be sufficiently melted to flex and bond with surrounding (cooler) materials but not so liquid that it flows away from the application point. The extruded material then rapidly cools and solidifies so that the next layer can be applied on top of it.

What Are the Advantages of Material Extrusion?

What Are the Disadvantages of Material Extrusion?

The disadvantages of material extrusion are:

What Is the Difference Between Material Jetting and Material Extrusion?