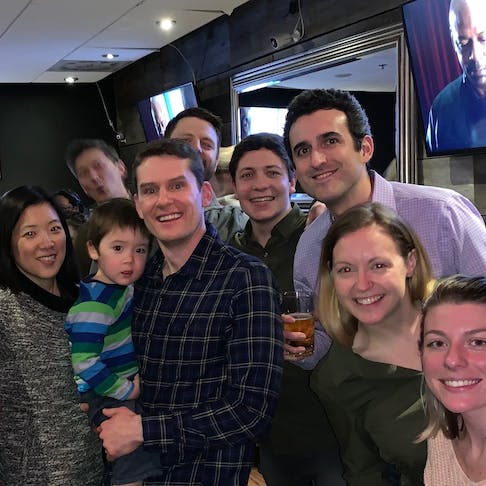 On Thursday, Jan. 24th, Xometry employees gathered for an exciting event: watching fellow colleague Aaron Lichtig compete on the quiz show, Jeopardy! Those who bet on his success made the right call because Aaron won big.

BETHESDA, MD, January 2019 -- On Thursday, Jan. 24th, employees at Xometry witnessed a historic moment for the company: one of our very own was on TV — on Jeopardy!, no less. When 7:00 pm rolled around, those at the Xometry watch party cheered loudly. We'd heard about Aaron's Jeopardy! experience and were happy Aaron had the opportunity to compete on the famous quiz show, regardless of the outcome.

Aaron competed against returning champion and astrophysicist Rachel Paterno-Mahler and sales manager Nancy Rohlen. Aaron started off steady, answering incorrectly occasionally and sometimes simply missing questions because his buzz-in was just a second off. However, as categories such as That's So P.C., Caracas, Painters' Masterpieces, and "Bio," rolled around, he began to lead by a margin of a few thousand dollars.

By the end of the Double Jeopardy round, Aaron's final score was $12,400, with Nancy following at $7,200 and Rachel at $-1,600. In the Final Jeopardy round, Nancy and Aaron were prompted with the clue, "He was the first U.K. prime minister born after Elizabeth II became queen." Nancy revealed her answer first. She was correct, answering "Tony Blair." She had wagered $5,201 and was now ahead of Aaron by just one dollar. Next, it was Aaron's turn. Having just heard the answer, he knew whether he was right or wrong, but the audience did not. He cryptically held a straight face, then beamed as his correct answer was revealed.

Congratulations, Aaron! The Xometry Family is proud of your game show success! Don't forget to tune in tonight on your local channel to support Aaron in the next round.

You can view the full set of questions and the final results here.