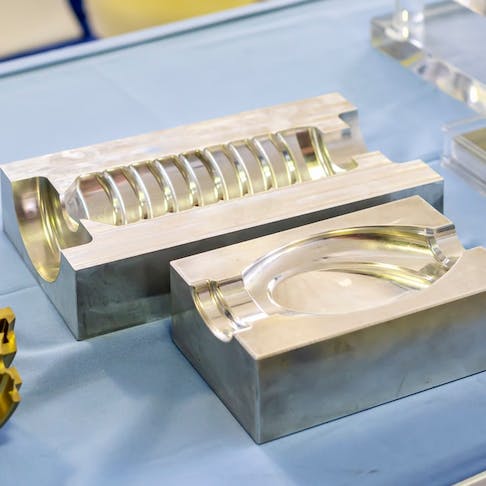 A look at the evolution and history of plastic injection molding technology.

Injection molding is the most cost-effective way to make a plastic part at scale. The manufacturing process involves injecting molten plastic into a mold tool, then ejecting the solidified part. This process quickly repeats hundreds or thousands of times, amortizing the cost of the mold tool and driving down the cost of each unit to a few dollars or less. In addition, since injection molding uses the same mold tool for each part, the manufacturing process offers consistent quality across every part. Injection molding isn’t just used for plastic, but can also be used with other materials like metals and glasses. The process also has a wider variety of materials, colors, cosmetics, polishes, and surface textures than CNC machining or even 3D printing.

How Did Plastic Injection Molding Get Started?

Plastic injection molding began in 1872 when the first molding machine was invented and patented. The brothers Isaiah and John Hyatt were the inventors of this relatively simple machine used to mold buttons, hair combs, and other small items. This indicated the beginning of the plastics manufacturing industry.

The image below shows a typical injection molding machine used by industry: 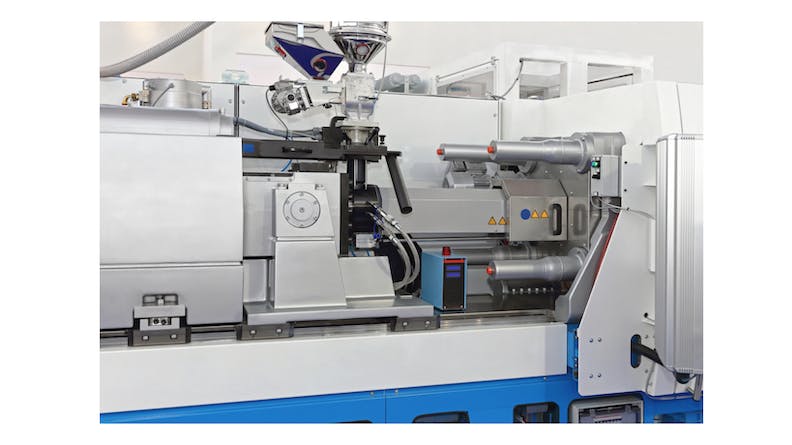 Clamping is when the two halves of the aluminum or steel mold are held together to prepare for the enormous pressure from injecting the molten material. Next, the pelletized resin is heated to a melted state and injected into the mold.

The part cools and solidifies into the final plastic part. This may take anywhere from a few seconds to a few minutes. The molded plastic part is then ejected, either automatically or manually, and the process starts again for the next part. Periodic maintenance is performed on injection molds to assure that they are not degraded and are capable of continuing to produce high-quality molded products. The image below shows a worker performing maintenance on a mold. 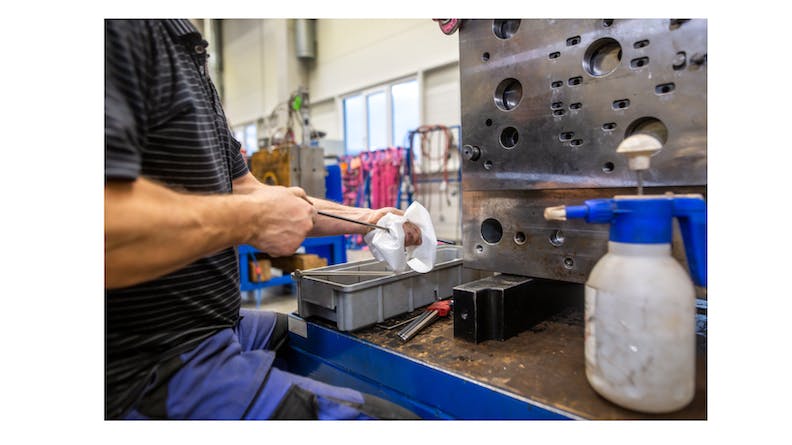 Maintenance being done on injection mold after production.

How Has Plastic Injection Molding Progressed Since It Started?

During the 1930s, the plastics manufacturing industry saw immense progress. At this time, polyvinyl chloride, polystyrene, and polyolefins, some of the best-known thermoplastic materials, were invented.

After World War II, this demand for plastic was in part a result of material shortages. For example, rubber production was interrupted by the war across Asia and attacks on shipping lanes. In addition, tanks and other war applications created a massive demand for metal. As steel production decreased, plastics were used as a substitute for metal and provided an affordable substitute. As plastics gradually popularized, so too did plastic injection molding. Its effectiveness in this era was primarily attributed to efficient, cheap, large-scale manufacturing.

Throughout the post-war period, plastics remained popular. However, as business leaders recognized the tremendous cost benefits over rivaling materials, global supply chains were reevaluated, and plastics became entrenched in the mid-20th century's economy and manufacturing processes.

The next major advancement in the plastic injection molding process was the development of the extrusion screw injection machine in 1946. The inventor James Watson Hendry gained greater control over the injection process by creating this machine and producing higher-quality plastic products. The extrusion screw injection machine is used to create plastic objects with a fixed cross-sectional profile. A single machine has a rotating screw within a heated barrel.

However, his next invention is what brought a significant change in the plastic injection molding industry. He included gas in this manufacturing process, which enabled him to create plastic products that were hollow, long, and complex.

Eventually, the plastics industry began to compete with the steel industry because it was able to produce light yet robust plastic components at a much more affordable and faster rate.

In addition, plastic injection molding is an affordable and effective method of producing high-quality parts and products.

Today's technology is quite similar to the technologies used in the past. However, computers have made the whole design and manufacturing injection process more manageable. Injection machines can use computers to make manufactured parts with greater precision. In the present day, plastic components are often the preferred choice for advanced technological and scientific applications.

With the growing concern for the environment, each attempt to make the plastic production process more environmentally friendly and sustainable can significantly contribute to preservation. As a result, many manufacturers have already implemented green practices into their operations.

What Changes Have Happened in Plastic Injection Molding Since It Started?

Ever since the late 1800s, this method of production has been used to manufacture products such as toothbrushes and hair clips. While there have been changes to plastic injection molding methods, the basic techniques are the same. Since the extrusion screw injection machine was invented, other, more automated machines have been created to increase injection speed.

Early plastic was hard to work with and difficult to shape into different items. Inventors worked with the primary material and developed a more durable and easier form with which to work. Shortly after, plastic injection molding was also established.

Although the basic injection molding techniques have remained similar, the materials used have changed. Plastics are now offered in a wider variety than when plastic injection molding methods were first invented. Currently, plastics with different melting points are accessible, and it is also possible to include additives that create specific qualities for the finished product.

Early molds were very simple, with only two parts. Now, very complicated molds are used that may have more than two areas or parts.

Although materials may have changed, the plastic injection molding methods are still the same at their most basic level. The process still calls for heated plastic to be injected into a mold and then chilled. Usually, chilling occurs thanks to coolant passing over and around the molding chamber where the plastic is shaped. The hardened plastic forms are then ejected and cut down to be ready for sale or use.

While early plastic was challenging to work with, a later form of plastic developed soon after was easier to shape into different items. This was the first real step toward modern injection molding processes. As soon as more versatile forms of plastic were invented, plastic injection molding methods similar to those used today were also created.

There changes to the plastic injection molding methods since their invention are minimal, but the more significant changes have been to the plastics themselves. Now, plastics are available in a much wider variety than they were in the late 1800s. In addition, plastic that is being molded can now be colored since dyes and other chemical additives can now be mixed in with the plastic granules themselves. Specific additives can give plastics unique qualities that make them more suitable for use in different industries and products.

What Is the Possible Future of Plastic Injection Molding?

Plastic injection molding will only improve in the degree of automation and the potential for cost savings it can bring to manufacturing. By investing in high-tech equipment that brings greater connectivity and automation to the plastic injection molding industry, manufacturers will better meet their customer's requirements and increase production savings to benefit all parties involved.

Some examples of this equipment include automated robotic unloaders. These automated unloaders are based on an automatic mechanism and can greatly improve the efficiency of the stacking and unloading process. They can increase the speed and efficiency of the overall production process while maintaining quality because of their programmable setups and product sensors.

Not all companies may have implemented the mentioned advancements, but these and many other innovative practices are already available. Consequently, the next step in technological advancement is expected to bring even more advantages to plastic injection molding manufacturers.

For instance, more lightweight materials will be used as the plastics industry evolves. In addition, automation will become an integral part of the manufacturing process, bringing both cost and time efficiency. Enhancements in product customization are also predicted, which will allow manufacturers to respond to their client's needs even better.

Plastic injection molding in the future will ideally be a greener method of manufacturing. Increased sustainability is one of the future improvements that will involve the use of recyclable, renewable, and reclaimable plastic materials.

Plastic injection molding dates back over a century, and the industry is still growing. According to Grand View Research, the global injection molded plastics market size was valued at $265.1 billion in 2020 and is anticipated to grow at a compound annual growth rate of 4.6% from 2021 to 2028. The increasing demand for plastic parts from different end-use industries, including automotive, packaging, home appliances, electronics, and medical devices, is expected to drive the market. Modern innovations to minimize the rate of faulty production have increased the significance of injection-molded technology in the mass production of complicated plastic shapes.

This article provided a review of the history of the injection molding process and how it has evolved over time.

Xometry offers a full range of injection molding services to assist with your production needs. Browse our website to explore the full range of our capabilities or to request a free, no-obligation quote.