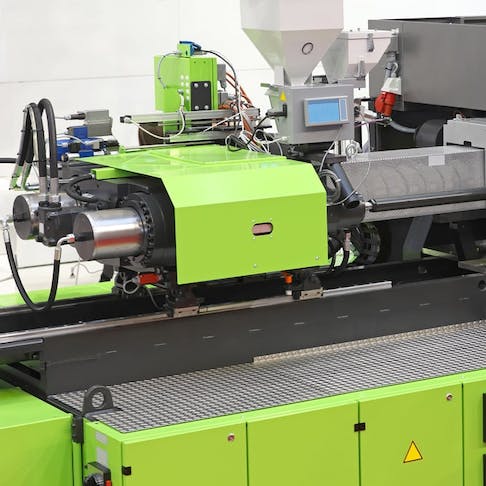 Learn about the types of plastic injection molding machines, their components, and uses.

What Are the Different Types of Molding Machines?

Injection molding machines (also known as injection presses) are generally categorized based on their drive system, or based on what powers their major components. The three basic types of drive systems are electrical, hydraulic, and hybrid drives, each of which is suited to unique injection molding applications. Below is a brief explanation of each of these drive types, their main advantages/disadvantages, cost, and general applications.

Because hydraulic injection molding machines are an established technology stretching back decades, they are the least expensive, and most rugged, and easiest to source and repair. Hydraulics also offer unparalleled clamping forces in their clamping unit (3-4 tons per square inch!), making them ideal for larger molds.

However, hydraulic injection molding machines are energy inefficient and require higher temperatures for molding which can ruin some heat-sensitive plastics. Both hydraulic pumps and coolant need continuous power input and require additional infrastructure to support them. Also, these types of machines can be problematic as they carry the risk of hydraulic fluid leaks, and they produce more noise than other injection molding machines.

Hydraulic injection molding machines tend to be cheaper than all-electric machines, costing anywhere from $3,000-$100,000+ depending on size. They will also require additional maintenance and infrastructure costs, estimated roughly to be around $17,000/year, plus the cost of worker wages for upkeep and operation. They can last up to 7-10 years with proper maintenance, but their hydraulic systems make them prone to frequent issues that can shorten their lifespan with improper care. These types of drive systems are mainly for larger, thick-walled applications such as those found in the automotive industry.

Electric injection molding machines (also known as all-electric machines) are an update to the traditional hydraulic machines, having been first developed in the 1980s in Japan. They implement several digitally controlled servo motors that allow for precise independent control of the four axes of injection molding: injection, extruding, clamping, and ejecting.

Servo motors used can idle when not in use, saving users up to 75% on power demands when compared to hydraulic models that need continuous pumping power. Electric injection molding machines also highly simplify the injection molding process with no necessary consumables, making them easier to run, repair, and scale down for small-to-medium-sized applications. All-electric machines are ideal for cleanroom applications needing high accuracy and a clean, quiet, and energy-efficient machine.

Electric injection molding machines' prices depend on size and features but generally hover around $5000 to $200,000+ depending on the needed size. All-electric machines will last on average 20+ years with proper maintenance and are mainly specified in cleanroom applications for the production of small to medium-sized parts for medical, biochemical, and pharmaceutical products.

Hybrid injection molding machines combine the benefits hydraulic and electric machines to create a powerful, accurate, and energy-efficient machine. They implement servo motor pumps for the hydraulic fluid, circulating oil for hydraulic pressure but allowing for power, emission, noise, and energy adjustments. They also have a servo motor-based reciprocating screw that saves energy costs when compared to fully hydraulic models that expend a significant amount of energy on screw recovery.

The advantages of hybrid injection molding machines include energy efficiency, reliability, responsiveness, highly controllable, reasonably priced, and require less maintenance and downtime. Because of their efficiencies, they exhibit faster ROIs than other types while still providing great clamping forces and precision.

Another disadvantage of hybrid injection molding machines is that the design of the machine will be vary based on the model or manufacturer. For example, some hybrid models use a hydraulic screw drive instead of an electric screw drive will not be as efficient as electric models and will experience many of the same downsides as hydraulic injection molding machines despite having some servo control.

What Are the Major Components of Plastic Injection Molding Machines? 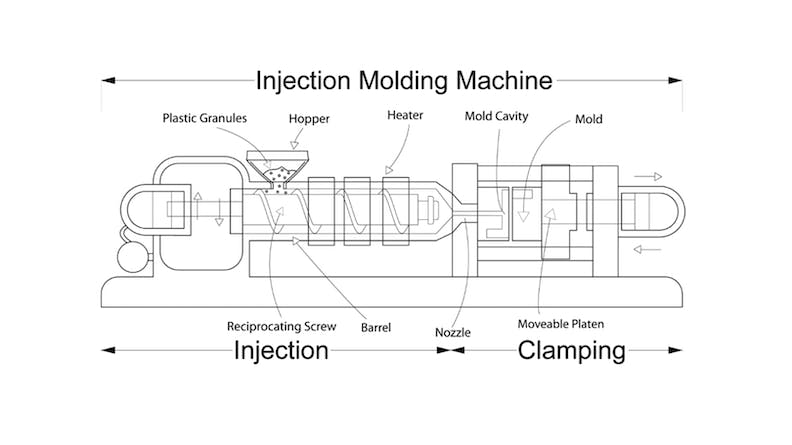 What Is the Most Common Use of Plastic Injection Molding Machines?

Plastic injection molding machines allow for the mass production of plastic parts. They can produce over 10,000 parts in a workday (depending upon machine and part design) with virtually no defects or variance between each part. Their use is only limited by the size of the machine and the imagination of the designers. Injection molding has so many uses that nearly every household in the US has had contact with dozens of injection molded items, if not more.

Where Can I Buy a Plastic Injection Molding Machine?

Parts that need an especially keen eye are oil filters (regardless of indicator status), valves, safeties, hoses, machine cylinders, power lines, lubrication points, nozzle alignment, and control modules. Finally, injection molding machines can be temperamental with seasonal changes, so be extra vigilant during transitional months and during extreme temperature days. A lack of preventative maintenance will not only stall the machine, but any profits made from it, so performing regular checks will decrease headaches over the long run (and extend the lifespan of the machine, allowing you to extract more value from the investment in this technology).

For more information, see our guide on the Major Components of a Plastic Injection Molding Machine.