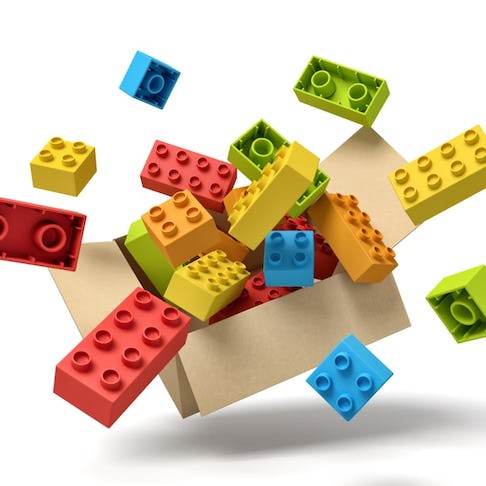 What is ABS Plastic?

Learn about the key properties, advantages, and toxicity of ABS Plastic.

This article will explore what ABS (acrylonitrile butadiene styrene) plastic is, what it is made of, its applications, its pros/cons, and its potential chemical interactions.

What Is ABS Plastic Made Of?

Acrylonitrile butadiene styrene, or ABS plastic, is an opaque thermoplastic and amorphous polymer that is created using a blend of two plastics and one rubber: acrylonitrile, polystyrene, and butadiene. Each material provides unique material properties and can be mixed in varying quantities to provide a range of ABS plastics from which to choose. Below is an explanation of each monomer used in the creation of ABS and its unique attributes.

This synthetic monomer is created by bonding propylene and ammonia together. Acrylonitrile is the component of ABS plastic that provides rigidity and heat-resistance—polymers with a high acrylonitrile percentage tradeoff some of the elasticity from the butadiene rubber in place for increased structure and temperature resilience.

This synthetic rubber monomer is a hydrocarbon rubber created by taking petroleum-based compounds and knocking off their hydrogens to create stronger, more unsaturated hydrocarbon chains. Polymers with a high butadiene content are softer and more pliable, which also contributes to the strength of ABS plastic when mixed with the other two monomers, by reducing its brittleness.

The styrene monomer is created by a similar dehydrogenation process as butadiene. ABS plastic is typically composed of ~50% styrene with the other two monomers in variable quantity, as high styrene composition increases rigidity but decreases heat resistance, which is generally not a useful combination of traits.

How Is ABS Plastic Made?

ABS plastic is made when acrylonitrile and polystyrene monomers are polymerized with butadiene rubber to create acrylonitrile butadiene styrene (ABS). This blending is typically accomplished using an emulsification process, wherein materials that would otherwise not mix are formulated into a cohesive single product (think milk, where fats, oil, and water do not separate out of solution but exist as a homogenous mixture). There are also patented formulation processes such as continuous mass polymerization, but emulsification is typically the standard approach utilized in creating ABS plastic.

Plastic manufacturers polymerize styrene and acrylonitrile in the presence of polybutadiene, resulting in long chains of polybutadienes crossed with styrene/acrylonitrile polymer units. The polymer chains in ABS plastic are held together by the acrylonitrile monomers that form polar attractions to both styrene and butadiene, creating a homogenous and highly durable plastic. The result is a stronger, tougher, and more attractive plastic than that of its constituents.  ABS material is favorable for a large list of uses including injection molding, 3D printing, CNC machining, and much more.

What Are the Uses of ABS Plastic?

ABS plastic is widely used throughout multiple industries to produce everyday products, including: LEGO bricks, computer keyboards, power tool housings, wall socket guards. It is a common material in automotive vehicles, where it is used in both decorative interior and functional components. Corrugated plastic sheets and tubing made from ABS material are widely used in construction, and the hard hats that construction personnel wear are also made of ABS. Common home appliances like vacuum cleaners, kitchen appliances, electronic equipment, and computer housings are produced using ABS plastic. ABS is a first choice material for plastic toys as it is rugged, colorful, and inexpensive.

The many beneficial properties of ABS allow it to function in many roles. It is strongly resistant to corrosion and impacts, readily machinable, and easily melted. ABS material is inexpensive to produce, also making it a plentiful material for high-volume applications such as with parts produced using injection molding. Parts made with ABS take well to paint/glue (i.e., have good wettability) and can attain highly glossy and attractive finishes.

ABS is currently one of the most popular materials for 3D printing. It is more heat resistant than PLA (another popular 3D printing material) but retains the color variety, strength, and manufacturing qualities needed in additive manufacturing. ABS is an excellent option for rapid functional prototyping as well because it is strong, inexpensive, and easily fabricated.

What Are the Advantages of ABS Plastics?

ABS has some major advantages as a general-purpose engineering material. Below is a brief list of some of ABS plastic's advantages:

What Are the Disadvantages of ABS Plastics?

ABS is not without limitations—below is a list of some of the disadvantages of ABS plastic:

ABS plastic is a petroleum-based plastic that is generally safe in its solid form, releasing no known carcinogens and being used throughout food processing applications. However, despite no study proving the long-term adverse effects of ABS plastic, a 2019 study investigating the cell toxicity of acrylonitrile butadiene styrene fumes generated from 3D printing states:

Medical device manufacturers also prohibit the use of ABS in medical implants, as its long-term health effects within the body are unknown but thought to be negative.

When melted, ABS plastic has an unmistakable foul odor that can cause (at a minimum) discomfort, and at worst physical symptoms. The medical consensus is that ABS plastic fumes are dangerous to inhale or be exposed to for both short and long periods of time. This is especially pertinent to 3D printing applications, where filament-based printers heat ABS to fabricate parts, releasing billions of particles per minute. Without proper ventilation, these fumes can accumulate and cause toxicity in users, so it is highly recommended to use a fume hood or print in a well-ventilated area to prevent this exposure from occurring. This precaution also applies to injection molding applications, where large quantities of material are melted and cooled several thousands of times in a workday, posing a serious threat if not addressed by safety measures.

This article presented what ABS plastic, its properties, advantages, applications, and toxicity.

Xometry offers ABS plastic material in sheet and filament form in a variety of sizes from Xometry Supplies. We also offer 3D printing services and plastic injection molding services using ABS plastic for all of your production needs. Visit our website to explore the full range of our capabilities or to request a free, no-obligation quote.