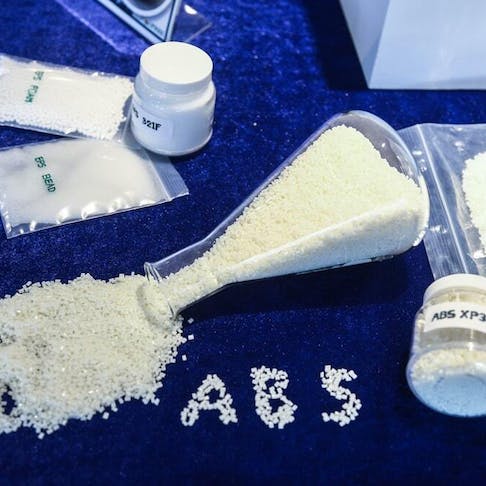 Learn about some of the ways in which ABS is utilized.

ABS stands for acrylonitrile butadiene styrene. ABS plastic is made when acrylonitrile and polystyrene monomers are polymerized with butadiene rubber to create acrylonitrile butadiene styrene (ABS). This blending is typically accomplished using an emulsification process. Materials that would otherwise not mix are formulated into a single cohesive product (think milk, where fats, oil, and water do not separate out of solution but exist as a homogenous mixture). There are also patented formulation processes such as continuous mass polymerization, but emulsification is typically the standard approach utilized in creating ABS plastic.

The acrylonitrile in ABS adds to chemical resistance, fatigue resistance, hardness, and rigidity, increasing the heat deflection temperature. The styrene makes ABS shiny, hard, rigid, and easy to process. The polybutadiene in ABS is a rubbery substance that makes it tough and ductile at low temperatures.

Because ABS is inexpensive and durable, it is often used to manufacture gardening tools. Miniature shovels, rakes, hoes, claws, and other hand tools are often fabricated from ABS to provide for a low-cost, lightweight set of tools managing the garden.

It is also a first-choice material for plastic toys as it is rugged and colorful.

What is ABS used for? ABS plastic is often used to manufacture musical instruments such as recorders and plastic clarinets, as well as tambourines, harmonicas, flutes, bugles, and percussion instruments, to name a few.

ABS is not used for medical implants but has many other medical applications. ABS resins are used because they have exceptional purity, low residual monomers, lot-to-lot consistency, and superior whiteness. ABS plastic medical applications include manufacturing nebulizers, drug delivery systems, compressors, and medical equipment housings.

ABS is used for piping and fittings installed in commercial and residential settings because it is cost-effective. It won’t flake, peel, rot, fade, dissolve, or leak unless punctured. ABS is an ideal choice for use in exterior applications, underground, in the extreme cold, and where it isn’t in contact with direct sunlight. ABS piping is often used in drain, waste, and vent (DWV) piping systems.

ABS is also used for vacuums. Most upright and canister cases on vacuums are now made primarily of ABS plastics with steel, polycarbonates, and other high-impact plastics used where additional strength is needed. ABS plastic works well for the large vacuum case designs and housings where an economical, lightweight, and rugged material is required.

ABS is one of the most popular choices used for 3D building materials. It is more heat resistant than PLA (another popular 3D printing material) but retains the color variety, strength, and manufacturing qualities needed in additive manufacturing processes.

ABS plastic is commonly used for prototyping. It is used in different rapid prototyping processes, such as 3D printing and injection molding. This plastic is popular due to its reasonable manufacturing cost and ease of use.

ABS plastic is used for electronic applications, including computer keyboards, printer parts, and electronic enclosures, because it is an electrical insulator.

ABS plastic is of good quality. ABS is considered a general-purpose engineering material. ABS is inexpensive and plentiful and is available in many different colors and form factors (pellets, tubes, bar, filament, etc.).

ABS is sturdy, lightweight, and ductile, being easily machined but retaining good resistance to chemicals, impacts, and abrasions. In addition, ABS is more heat-resistant than other thermoplastics in its weight class and can withstand multiple cycles of heating/cooling, making it a fully recyclable plastic. ABS can achieve a quality finish and is readily paintable. ABS has low heat conductivity and electrical conductivity.

For more information see our guide on What is ABS Plastic.

Can ABS Be Recycled?

Yes, ABS can be recycled. It is 100% recyclable. In addition, ABS has an assigned recycling code, the number that designates the material with which a plastic object is made to help streamline the recycling process. ABS’s recycling code is seven (7). The code can be found at the bottom of a plastic item, depicted as the number seven inside the recycling symbol with revolving arrows forming a triangle.

However, most municipalities don’t recycle number seven plastics. They usually only recycle numbers one and two. This restriction means that ABS waste may not be recycled automatically after the municipal or garbage truck picks it up.

Manufacturers can reuse and recycle ABS, even if local governments do not. ABS plastic is entirely recyclable and mostly biocompatible. ABS plastic can easily be merged with other materials to create different commercial products that are of high quality yet cost-effective.

Many industries use old pre-existing ABS plastic products as a starting material for creating ABS plastic. Due to its 100% recyclability, ABS products can be heated, liquified, and remolded into new products multiple times.

ABS plastic is not harmful in its typical uses. It is a petroleum-based plastic that is generally safe in its solid form, releasing no known carcinogens and being used throughout food processing applications.

However, medical device manufacturers prohibit using ABS in medical implants, as its long-term health effects within the body are unknown but thought to be negative. When melted, ABS plastic has an unmistakable foul odor that can cause discomfort and, in the worst case, physical symptoms. The medical consensus is that ABS plastic fumes are dangerous to inhale or be exposed to for short and long periods.

The fact that ABS is dangerous to inhale is especially pertinent to 3D printing applications, where filament-based printers heat ABS to fabricate parts, releasing billions of particles per minute. Without proper ventilation, these fumes can accumulate and cause toxicity in users, so it is highly recommended to use a fume hood or to print in a well-ventilated area to prevent exposure. In addition, this precaution applies to injection molding applications, where large quantities of material are melted and cooled several thousands of times in a workday, posing a serious threat to personnel if not addressed by safety measures.

This article provided a review of some of the primary uses of ABS plastic.

Xometry offers injection molding services and 3D printing using a variety of materials. Contact us for a free, no-obligation quote for your product manufacturing needs.