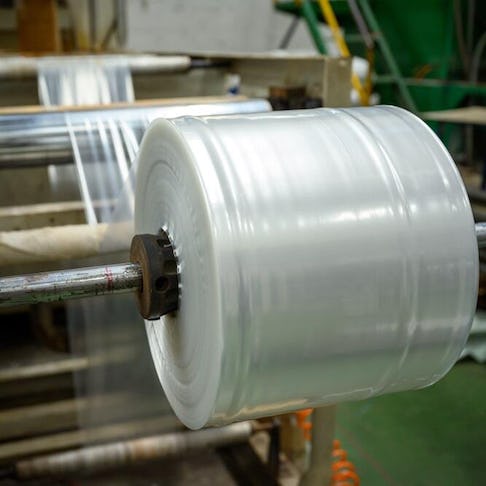 All About Linear Low-Density Polyethylene (LLDPE)

Learn about the material's properties, uses, advantages, limitations, and toxicity.

Linear low-density polyethylene is a commodity thermoplastic that is widely used in the packaging industry. It is valuable there because it can easily be formed into film-like materials that retain significant tensile strength. Its molecular chains contain relatively short branches when compared to other polyethylenes. This article will go into more detail about what this material is, its use cases, and its effect on human health.

What is Linear Low-Density Polyethylene?

Linear low-density polyethylene is a semi-crystalline polymer with many short branches on its main molecular chains. This means that these linear molecules do not become entangled as easily as LDPE and HDPE. The figure below indicates the difference between LLDPE and other common forms of polyethylene.

LLDPE plastic is typically made from one of three different co-monomers classified as alpha-olefins. These are described below.

Various blends of the above-mentioned co-monomers are also used to adjust the properties of LLDPE plastic, the most common being a blend of butene and hexene.

How is Linear Low-Density Polyethylene Made?

Linear low-density polyethylene is manufactured via the copolymerization of ethylene and an alpha-olefin such as butene, hexene, or octene co-monomers. The co-monomers are most often polymerized using the Unipol process, which is also known as the gas phase process. The catalyst (either Ziegler-Natta or metallocene) and ethylene are blown into a fluidized bed reactor where copolymerization occurs. The polymer then settles at the bottom and exits the reactor as a powder which is then pelletized. During the pelletization process, additives are added to the material.

Linear low-density polyethylene has unique melt flow properties (rheology) and is typically processed using blow molding, film extrusion, or injection molding. Film extrusion is the dominant processing method for LLDPE. LLDPE plastic has a high shrinkage rate in part due to the fact that this material is semi-crystalline and therefore takes up more volume in its melt state than in its solid state.

What Are the Properties of Linear Low-density Polyethylene?

What Are the Uses of Linear Low-Density Polyethylene?

Linear low-density polyethylene plastic can elongate by a remarkable percentage but also retains high tensile strength. The linear nature of the polymer also makes this material ideal for walled applications like those listed below.

What Are the Advantages of Using Linear Low-Density Polyethylene?

Linear low-density polyethylene has many advantages and is well suited for thin-film applications. Properties like those listed below make LLDPE ideal for these types of applications.

What Are the Disadvantages of Using Linear Low-Density Polyethylene?

Once linear LLDPE stretches, it does not recover like other thermoplastics. This property can be desirable in some applications like stretchable pallet films but in general, this lack of memory retention is a distinct disadvantage.

LLDPE is not environmentally friendly and finds its way into many single-use applications. As such, it makes up a large percentage of environmental pollution. In addition, it does not degrade readily and is difficult to recycle.

However, there is some risk during the processing of linear low-density polyethylene products. Inhalation of the raw material’s dust can cause irritation to the respiratory system. Fortunately, ingestion of LLDPE does not have any adverse effects.

Linear low-density polyethylene does not contain any BPAs and can be considered non-toxic. However, as is the case with many thermoplastics, combustion of LLDPE can produce extremely harmful fumes. Exposure to burning LLDPE should be avoided.

The key difference between LDPE and LLDPE is the structure of their molecular chains. Low Density Polyethylene (LDPE) has significantly longer branching chains compared to the short branches of LLDPE. The long branches of LDPE cause them to get tangled far more often. In the macroscopic scale, that translates into less elongation before failure. The linear molecular structure of linear low-density polyethylene makes it great for thin-film applications. LLDPE has better tensile strength and impact strength when compared to LDPE and also has a higher density. LLDPE can stretch more easily without breaking which makes it ideal for stretchable packaging film.

Xometry offers plastic injection molding, 3D printing, and other manufacturing services for all of your project needs. Visit our website to learn more or to request a free, no-obligation quote for your part manufacturing requirements.