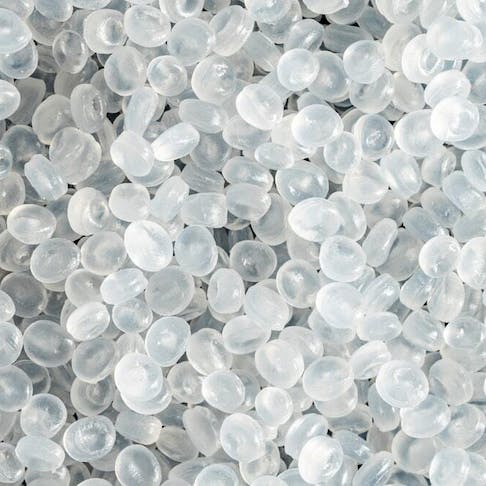 Learn all about the properties and uses of this material.

Polyethylene (PE) is the most widely used commodity plastic. It is available in many different forms depending on the configuration of its molecular chain. Polyethylene is classified as a homopolymer due to the fact that it is made from repeated units of one single type of molecule, ethylene. Polyethylene is a tough, abrasion-resistant plastic that can be easily formed using techniques like injection molding and blow molding. It is typically used for bottles, water tanks, or plastic bags.

This article will discuss the structure, properties, and applications of polyethylene.

What Is Polyethylene (PE)?

Polyethylene was discovered by Reginald Gibson and Eric Fawcett while reacting ethylene with benzaldehyde in 1933. The first patent for polyethylene was filed in 1936 by a company called Imperial Chemical Industries. Karl Ziegler later invented a process to polymerize HDPE (High-density polyethylene) in 1953, and one of the key catalysts used in the polymerization process is named after him.

What Is the Chemical Formula for Polyethylene?

The basic polyethylene polymer is formed by a carbon backbone, with each carbon atom in the chain having two single bonds to its carbon neighbors, one on each side. The remaining two carbon bonding sites are filled with hydrogen atoms. Polyethylene can be described as (C2H4)n which represents the repeating ethylene molecule within the polymer chain. Figure 1 below gives a visual representation of the polyethylene polymer: 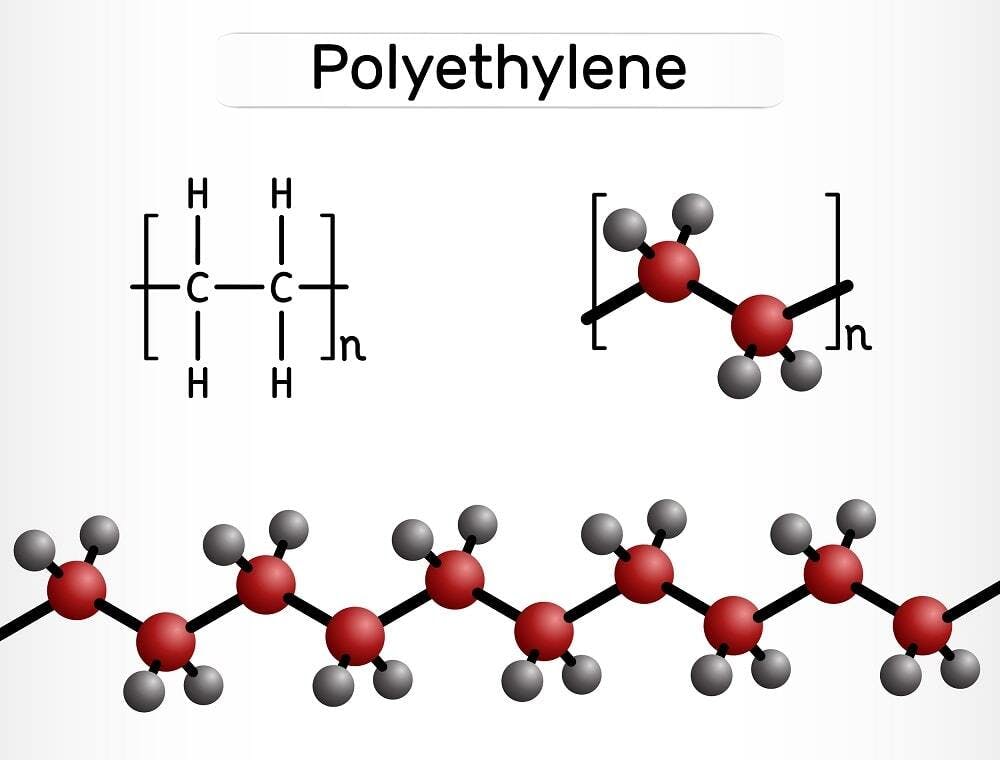 How Is Polyethylene Produced?

Polyethylene is produced from ethylene, a byproduct of the processing of crude oil or natural gas. Ethylene can be polymerized into polyethylene only in the presence of a suitable catalyst, such as metallocene or Ziegler-Natta-type catalysts.

The most prevalent polymerization process is coordination polymerization, which is another form of addition polymerization. The process works by introducing a free radical to the ethylene molecule. This free radical causes the double bond present between the two carbon atoms to break, which creates a molecule with an open bond location on either side. This open bond will then connect with another molecule with open bonds. This process continues, and molecules are continuously added to form long polyethylene polymer chains. Once polymerized, the polymer is extruded into long filaments. These filaments then pass into a pelletizer which cuts the filaments into small pellets that can be shipped to polyethylene plastic processors.

What Are the Properties of Polyethylene?

The properties of polyethylene are listed in Table 1 below:

What Are the Common Applications of Polyethylene?

Polyethylene and its variants are some of the most widely used plastics and can be found in almost every major industry. The common applications of polyethylene are:

What Are the Types of Polyethylene?

The four most common types of polyethylene are described below:

What Are the Benefits of Using Polyethylene?

Yes, polyethylene is widely used for plastic injection molding. It is one of the easiest materials to work with. Its processing ease makes it popular in other applications as well, such as blow molding and film extrusion. For more information, see our guide on Plastic Injection Molding.

Why is Polyethylene Used in Plastic?

Polyethylene is a thermoplastic and as such is not used in plastic but is rather a plastic itself.

No, polyethylene is not environmentally friendly. Like most thermoplastics, polyethylene is produced as a crude oil processing by-product and is not biodegradable. In fact, a large percentage of plastic pollution is due to discarded polyethylene films and bags.

What Is the Difference Between Polyethylene and Polypropylene?

Polyethylene (PE) and polyethylene terephthalate (PET) are entirely different polymers, manufactured differently, and used for different applications. PET, with the chemical formula (C10H8O4)n, is produced from the polymerization of ethylene glycol and terephthalic acid, while PE ((C2H4)n) is produced from the polymerization of ethylene. Polyethylene is often used for making plastic films or containers, whereas PET is more typically used in fibers. It is more commonly known as polyester. For more information, see our guide on Polyethylene Terephthalate.

This article summarized the structure, types, properties, and applications of polyethylene (PE). To learn more about polyethylene and other types of plastic and how they can benefit your unique applications, contact a Xometry expert today.