What is the 3D Printing vs Injection Molding Cost-per-Unit Breakeven?

Although 3D printing, also known as additive manufacturing, has emerged as an increasingly important manufacturing strategy, it cannot replace traditional manufacturing of parts through injection molding, or other mass manufacturing means.

The question is: when does it make sense from a business perspective to employ 3D printing versus other manufacturing methods? Said another way: at what volumes is it advantageous to 3D print parts?

We uploaded the 3D CAD files to Xometry's Instant Quoting Engine℠, which provides instant quotes for 3D printing, CNC milling, and Urethane Casting in various quantities. Xometry’s Injection Molding service typically provides quotes same-day. With a one-stop-interface like Xometry’s, it is no longer a chore to compare pricing and lead times over various processes. 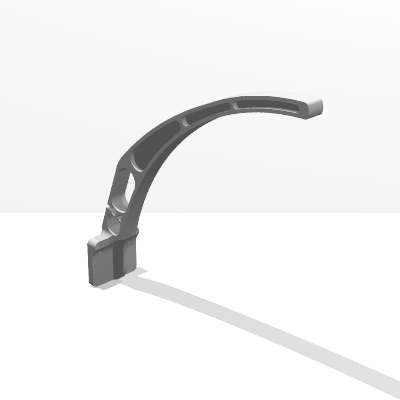 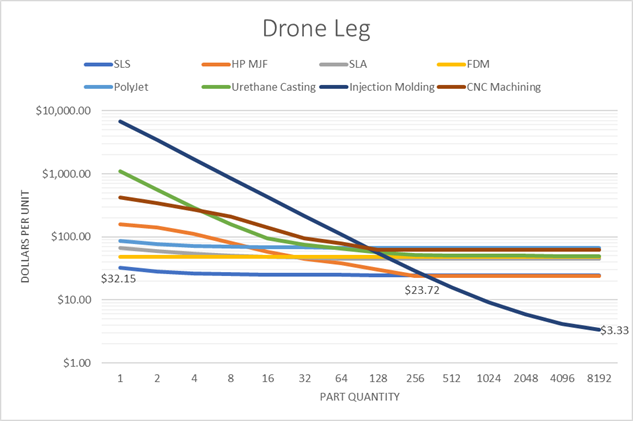 Data results for the per-unit price of the Drone Leg over doubling quantities from 1 to 8,192 pieces.

The Drone Leg’s geometry prices out the least expensive in Selective Laser Sintered (SLS) nylon from quantities 1 ($32) to ~250 ($24). Around this range, another 3D printing process called HP MultiJet Fusion (HP MJF) became slightly less expensive per part, but at the same time, the price per unit in Injection Molding hit its break-even and quickly shows its scaling benefit. The results are clear, at around quantity 250, it makes sense to start considering injection molding for a project with this geometry, with scaling that quickly goes to dollars a unit. ~$3 per piece at quantities over 8000, including the cost of tooling! Given the curve, it is clear that the pricing would amortize even further as quantities increase. 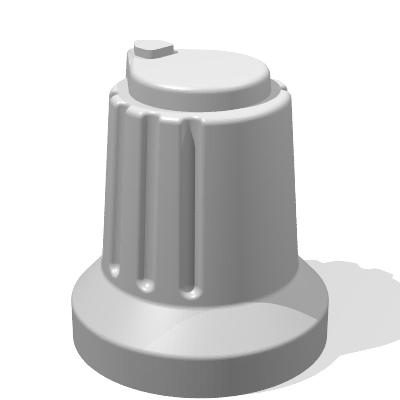 Data results for the per-unit price of the Potentiometer Knob over doubling quantities from 1 to 8,192 pieces.

The Potentiometer Knob tells a different story than the Drone Leg. Because of its small size, about the size of a thimble, it remains cost competitive using 3D printing for quantities up to 2000 units before the break-even hit to injection molding.  Note that around quantity 30, it is more economical to move from SLS 3D printing to HP MJF 3D printing. At $3.45 per unit, HP MJF is a great solution to keep small batch inventory on-hand using just-in-time (JIT) methodology. However, if over 2000 are needed, then injection molding can save you thousands of dollars through the product’s lifetime. In fact, the per-unit price without tooling amortized was less than $0.80! Savings could be even higher if a multi-cavity mold tool is chosen. 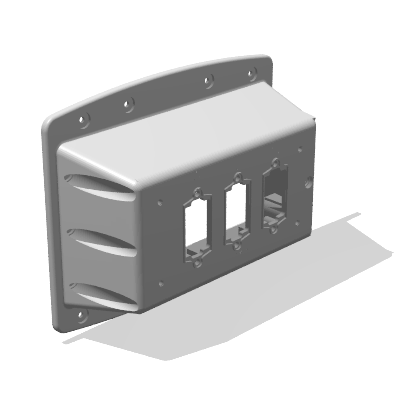 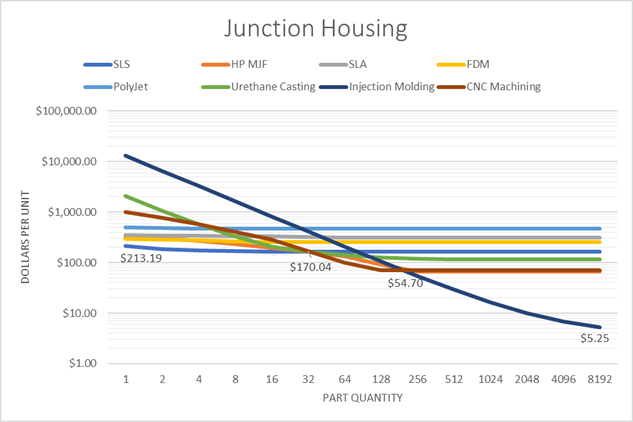 Data results for the per-unit price of the Junction Housing over doubling quantities from 1 to 8,192 pieces.

The Junction Housing is an interesting case because it is typically considered a “larger part” on 3D printing platforms. This gives it a higher per-unit price from the get-go, and also very little discount over quantity for these processes. SLS nylon still is the cheapest at quantity one, being just above $200. Around 30 units, there is actually better pricing if the part is CNC machined. Even Urethane Casting and HP MJF tend to be more competitive than SLS between quantities 30 and 250. Like the other parts in this study, injection molding is ultimately the clear choice for production manufacturing. The upfront tooling to mold this piece is over $10,000, but the per-unit price is so low that at 250 units it becomes dramatically more economical, by an order of magnitude, to move to injection molding tooling.

3D printing and injection molding are not competing, but rather complementary ways of manufacturing. For example, a business may use SLS for rapid prototyping and low-volume production, and then switch to injection molding once the volume of parts is above a certain threshold.

The ability to produce a just-in-time quantity of parts, in a short amount of time, is where 3D printing shines. Compare that with injection molding, which is typically used in mass manufacturing – i.e. producing hundreds, if not thousands, of parts inexpensively.

Although cost per unit is an important figure, there are several hidden costs that managers should also take into consideration when making manufacturing decisions:

All of these play a factor in manufacturing selection and vary on a case-by-case basis. Ultimately, engineers and project managers should think critically about their project goals and determine whether a combination of processes, such as 3D and injection molding, is best for them.

Our Ultimate Guide to Manufacturing Across Your Product Development Cycle

While many companies claim to provide manufacturing on demand, very few come close to Xometry when it comes to truly delivering against scalable capacity of production-as-a-service, fast turns on quoting and production, and uncompromising high-quality products.

Watch our video series, the X-Tiles, to help you distinguish between our 3D printing processes. In this release we're comparing nickel-plated prints and "clear" 3D printed parts to help you choose the best process for your project.

Watch our video series, the X-Tiles, to help you distinguish between our 3D printing processes. In this release we're comparing SLS vs. FDM, SLS vs. SLA, and Carbon DLS vs. PolyJet to help you choose the best process for your project.