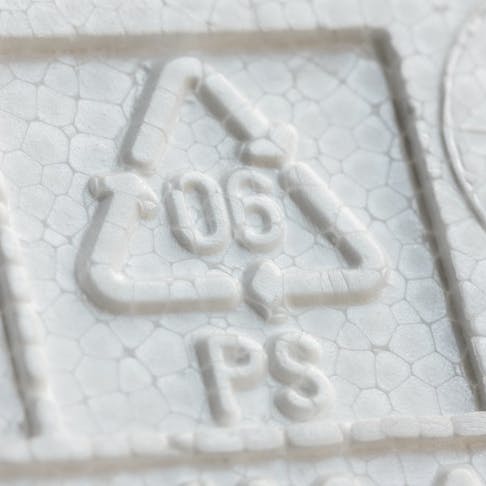 What is Polystyrene? Learn About Polystyrene Uses, Advantages, and More

Polystyrene is a type of polymer that is transparent, rigid, brittle, and moderately strong in its unmodified state. It is a plastic made by polymerization, which combines the building block compound called styrene. Polystyrene is used in different forms, including as foam, film, and rigid plastic, for applications from food packaging to electronics protection. While polystyrene’s uses are flexible and it features a low shrink rate, it also flows slowly and can come out brittle. Polystyrene is food safe, though over time it can leach styrene. It’s commonly used in injection molding, and manufactured by companies such as Dow and Trinseo.

Polystyrene, also known as poly-phenylethene, is a polymer made up of repeating molecules called styrene. It is a thermoplastic polymer, meaning it softens and melts when heated and can be reused. It is an excellent electrical insulator and is resistant to chemicals such as acids and bases. Solid polystyrene is transparent due to the lack of crystalline arrangements of the styrene molecules. It is a brittle material with poor UV resistance. It also has a relatively low glass transition temperature of 100ºC, where the polymer begins to soften before melting. Polystyrene is designated with recycling code number 6, and it can be melted and reused in different shapes or forms.

Polystyrene is usually combined or co-polymerized with other compounds to form plastics with improved properties. For example, polystyrene is combined with methyl methacrylate to form Poly (styrene-co-methyl methacrylate) or PSMMA. The resulting material has higher clarity with enhanced UV and chemical resistance. Another popular plastic called Acrylonitrile Butadiene Styrene (ABS) results from the co-polymerization of acrylonitrile and butadiene with polystyrene. As a result, ABS possesses high tensile strength, weldability, moldability, and dimensional stability.

What Are the Uses of Polystyrene?

Polystyrene is used across all industries, from toys and parts of consumer goods to insulation and packaging materials. It is also the ingredient for the synthesis of new plastics. Polystyrene is used in its solid, film, and foam form, forms the polymer matrix in composites, and works as the basis for co-polymerized plastics.

Plates and cups can be made from polystyrene, as can sound dampening foam and protective lamination over posters and other products. Wind turbines and corrosion-resistant pipes can also be made of polystyrene. Its co polymerized forms of ABS, SBR, SAN, and HIPS can be used for applications from 3D printed prototypes to optical fibers rubber gaskets to automotive gas tanks.

What Are the Advantages of the Plastic Injection Molding Process?

The advantages of polystyrene plastic injection molding are low shrinkage, moldability, and the flexibility to be used in blended and foam form. Polystyrene, like all thermoplastics, is reusable and easily molded. It also features low shrinkage during the plastic injection molding process. Usually, polystyrene shrinks less than 0.5%, which is low compared to other injection molded plastics. This property makes it possible to capture intricate design details of parts. Besides this, polystyrene features less warpage and produces uniform-shaped parts where designers can make accurate dimension predictions of finished parts.

What Are the Disadvantages of the Plastic Injection Molding Process?

The temperature range at which polystyrene begins to soften and melt is relatively short, and the process must be carefully monitored and designed accordingly. Unmodified polystyrene is also brittle, making parts prone to failure during the ejection of parts from the mold. There must be careful ejection pin design to ensure the parts can withstand the flexural stress endured during ejection. Polystyrene co-polymerization with compounds like rubber or butadiene is also often used to improve the material’s impact strength and make the plastic less brittle.

How Does Polystyrene Affect Human Health?

Polystyrene affects human health by releasing styrene when it starts leaching after long periods, which can affect the central nervous system. However, if accidentally ingested, the material will only cause someone to choke if the piece is big enough. Styrene, the main building block of polystyrene, is considered a potential carcinogen by the World Health Organization’s International Agency for Research on Cancer. In the 1980s, the US Environmental Protection Agency (EPA) was able to show that styrene was found in 100% of the samples of human fat taken from 48 states in the United States. Chronic exposure to styrene is dangerous to human health. It affects the central nervous system, causing headaches, fatigue, and confusion.

What is the Difference Between Polystyrene and Polypropylene?

Polystyrene is a popular material in many applications, from parts of consumer goods to insulation and packaging solutions. Its moldability and low shrinkage make polystyrene suitable for injection molding. Moreover, polystyrene is the base material for various co-polymerization processes to produce better plastics with unique properties. It’s also used as polymer matrix for several composite materials.

Thinking about ordering polystyrene products? Engineers at Xometry are ready to help you choose which material and production technique will make your design project a success. Start your quote with Xometry today.

Woldeab H. Tesfamariam
Woldeab H. Tesfamariam is a mechanical engineer with interests in industrial design and manufacturing. He is passionate about green technology and is enthusiastic about the use of smart design, simulation, novel manufacturing techniques, and the Internet of Things (IoT) to find innovative solutions to the challenges humanity is facing such as climate change, the energy crisis, and pollution.