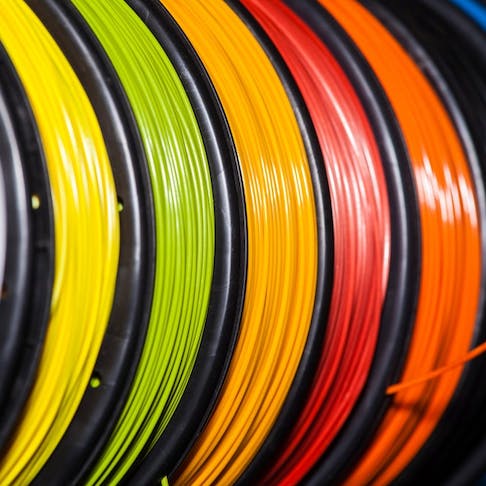 PC-ABS is a blend of the two polymers - polycarbonate (PC) and acrylonitrile butadiene styrene (ABS) - and it includes the benefits (and limitations) of both thermoplastics. PC-ABS materials are widely popular in the engineering world for their functional characteristics.

This article will explore what makes PC-ABS an attractive engineering thermoplastic by detailing its desirable properties, its uses, and its unique attributes from other materials.

How “lightweight” a material can be is determined by its density or its mass per unit volume. The density of PC-ABS varies based on the specific ratio of PC to ABS, but generally, it is 1.15 g/ cm³. Below is a list of densities of various other thermoplastics for comparison:

While not the lightest plastic, PC-ABS is a lightweight polymer, which is an impressive feat compared to its other beneficial properties like its strength and resistances.

PC is an optically clear material, while ABS is opaque, which makes PC-ABS generally opaque. It is unable to be used in the optical applications for which PC is specified. However, PC-ABS does retain the glossy surface of ABS and can reflect light well, offering a mirror-like shine if polished correctly. PC-ABS is also easily colored, pigmented, and painted.

Heat resistance is the ability of a material to withstand heat and retain its general properties across heat differentials. PC offers to PC-ABS what ABS alone does not have, namely a better heat resistance. PC-ABS exhibits a good thermal resistance, allowing the attractive ABS to function in roles in which it would typically deflect (or worse, burn). The increased heat resistance of PC-ABS also contributes to its flow characteristics, workability, and processability. Note that specific PC-ABS blends will significantly alter its heat resistance.

Chemical resistance is the ability of a material to withstand acids, bases, volatile compounds, chemical reactions, etc. This thermoplastic is generally not specified for harsh chemical environments. PC-ABS has poor resistance to solvents and oxidation, but this can be mitigated by impregnating the PC-ABS blend with reinforcing agents like glass fibers, fillers, and other additives.

The toughness of a material is defined by an ability to absorb incoming energy and plastically deform without breaking apart. Another way to think about toughness is the measure of how much energy a material can absorb without cracks propagating through it. Though incredibly hard, ceramics like glass have very poor toughness despite higher bonding strengths. Impact strength is a similar measure, where it defines a material’s resistance to crack-formation through a single, sudden applied force. It is not necessary to understand the differences between these two attributes if they sound the same (as they are nearly identical to the non-material-science-obsessed eye), just note that they denote how difficult it is to fracture a material.

The most desirable properties of PC-ABS are its toughness and impact strength. PC-ABS is exceptionally good at remaining tough at low temperatures, where even metals are prone to cracking. The flexibility of ABS plus the strength and resistances of PC creates a material that bends but does not break easily. The high impact strength and toughness of PC-ABS makes it ideal for interior automotive applications and electronic appliance applications.

Ultraviolet (UV) radiation is emitted from the sun and can damage some materials, especially plastics. ABS has a poor resistance to UV light while PC is somewhat resistant, leading PC-ABS to be more resistant than ABS alone but still susceptible to its effects. This UV susceptibility will change significantly with the ratio of PC to ABS, just as with other properties.

What Are the Mechanical Properties of PC-ABS?

Below is a table briefly detailing the mechanical properties of PC-ABS. Below the table are explanations of each property and their importance to PC-ABS as an engineering thermoplastic. Note that the testing method is a standardization, where mechanical properties will differ based on specific testing procedures.

The tensile modulus of a material is defined as the ratio of its tensile strength to its strain when undergoing elastic (non-permanent) deformation. Also known as Young’s modulus or the modulus of elasticity, the tensile modulus describes the stiffness of a material or its ability to return to its original shape under stress. While not precisely elucidating by itself, the tensile modulus is used in calculations to predict how much a material will extend under tension or shorten under compression. PC-ABS has good stiffness, giving it good dimensional stability and creep resistance as well as better machinability than either polymer alone.

Flexural strength is defined at the maximum stress point in which a material plastically bends (or snaps) in a 3-point flexure test. It is a general descriptor of how bendy a material is and is useful for structural applications where a material experiences forces perpendicular to its operating axis. The flexural strength of PC-ABS is good at 9800 psi / 68 MPa, making it ideal for snap-fits, jigs, and other bending components.

Flexural modulus defines a material’s ability to bend elastically and is virtually the same as the tensile modulus (just in a flexural loading arrangement and not in a tensile arrangement). It is another measure of stiffness and will help predict how much a material deflects in a structural/constant loading situation. Flexural modulus is a useful measure for materials that do not fracture easily upon applied stress (like plastics), as they generally have more bending capacity than brittle or stiff materials.

What Are the Usage Areas of PC-ABS?

The increased strength characteristics of PC-ABS make it a versatile engineering material. It is commonly employed in functional prototyping, as designers can freely work on the material, color it, and rely on its strength. It also has a good finish, allowing prototypes to better show what the final product will look and act like. Two industries where PC-ABS excels are the automotive and electronics industries, where it is used to make interior car components, glove boxes, seat backs, TV frames, computer housings, phone housings/cases, portable handheld device enclosures, and much more. PC-ABS can even extend into other industries with the inclusion of fiberglass and other additives to improve its resistances and mechanical properties.

PC-ABS is also finding uses in 3D printing, as both PC and ABS are massively popular in FDM and other additive manufacturing applications. PC-ABS combines both the workability and strength of its constituents in 3D printing, and provides a more functional, attractive, and strong part.

What is the Difference Between PC-ABS and ABS?

PC-ABS is a blend of both PC and ABS, while ABS is a blend of acrylonitrile (a polymer), butadiene (a rubber), and styrene (a polymer). PC-ABS does not have the weaknesses of ABS, mainly the heat intolerance. It is also generally stronger and easier to machine than ABS and provides higher impact resistance. In general, PC-ABS is up to 60% stronger than ABS in specific blends, having higher overall mechanical properties in most categories.

Yes, PC-ABS offers great plastic injection molding results. Its increased dimensional stability, heat tolerance, shrink rate, and flow characteristics make it a valuable injection-molded material when compared to its constituent polymers. It is also a fully sustainable and has an overall better performance than PC and ABS. The only major consideration for PC-ABS in injection molding is it must be dried (below 0.04% humidity) to be effectively molded.

Xometry offers PC-ABS filament in white or black from Xometry Supplies. We also provide 3D printing services and plastic injection molding services for all of your production needs. Visit our website to explore the full range of our capabilities or to request a free, no-obligation quote.