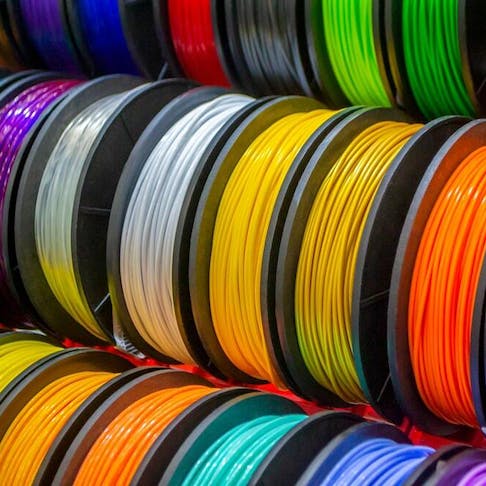 PC-PBT is a stiff polymer blend of two other polymer materials – polycarbonate and polybutylene terephthalate. "Polymaker" is the name of one of several companies that manufactures this material, and its PC-PBT specifically is sold in filament form for 3D printing. It has a density of 1.17 - 1.24 g/cm³, a melting point of 223˚C, and a glass transition temperature of 140˚C. Moreover, this polymer alloy has excellent impact resistance, temperature resistance, and chemical resistance. Due to its properties, Polymaker PC-PBT is used primarily for 3D printing items such as electronics components, though PC-PBT in general is used in the automotive, manufacturing, and water supply industries to produce various products such as body panels, door handles, wiring equipment, irrigation components, and garden power tools.

PC-PBT is a versatile, heat-resistant thermoplastic blend of two other thermoplastics - polycarbonate (PC) and polybutylene terephthalate (PBT). Polymaker is one specific manufacturer that supplies this material in 3D printer filament form. However, it's worth noting that this material is also made by other companies and used in other production methods. Polymer blends are physical blends of structurally distinct homopolymers or copolymers. Polymer blends (polymer alloys) are produced by combining two or more polymers to create a new material with enhanced properties. Polycarbonate, one of the two polymers that compose the PC-PBT filament is a naturally transparent amorphous thermoplastic used primarily for tougher materials. The other component, polybutylene terephthalate, is a semi-crystalline thermoplastic polymer that belongs to the polyester family of polymers. The stiffness, high strength, and resistance to thermal deformation of this material, together with polycarbonate's dimensional stability and impact strength, create the durable, chemically resistant polymer blend PC-PBT. Most commercial PC–PBT mixes include around a 50/50 weight percentage of PC and PBT.

How Is Polymaker PC-PBT Made?

PC-PBT is made by mixing polycarbonate and polybutylene terephthalate. The main reason behind making polymer blends is to get a material that would have a combined set of properties by only taking a desirable subset of properties from both of the individual composing polymers. In most cases, PC-PBT is made with the help of a solvent – a usually liquid substance used to dissolve a solute, or PC and PBT in this case. As soon as the solvent evaporates, the two polymers will blend together thoroughly, creating the PC-PBT alloy.

What Are the Characteristics of Polymaker PC-PBT?

PC-PBT blend's main characteristics are its excellent impact resistance and chemical resistance. This is true for Polymaker's PC-PBT and that of other manufacturers. This impact resistance allows for the material to stay intact even when exposed to low temperatures, while its chemical resistance makes it inert to chemical attacks. Moreover, PC-PBT provides excellent abrasion resistance, heat resistance, excellent aesthetics, and excellent flow properties. This polymer blend is resistant to many chemicals, including hydrocarbons, organic acids, inorganic aqueous salts, alcohols, and mild base and acid solutions. However, PC-PBT is not resistant to strong alkalis and chlorinated aromatic solvents, including ketones or esters. Some important factors that influence the material's chemical resistance are the temperature to which the item is exposed, the duration of exposure, and the composition of the surrounding media. As a result, performing a preliminary resistance test in real-world settings is of the utmost importance.

What Are the Uses of Polymaker PC-PBT?

Polymaker PC-PBT is used in 3D printing applications including electronics covers and bases, VR and AR headsets, and housings for batteries and gadgets. Apart from being utilized as a 3D printing filament, the PC-PBT polymer manufactured by Polymaker and other companies has broader applications. For example, this material is often used in the automotive industry for body panels that require toughness at low temperatures, heat resistance, dimensional stability, and stress-cracking resistance. Moreover, the high chemical resistance property of the PC-PBT material makes it an ideal choice for lawn and garden power tools and equipment, as well as other applications that require resistance to intermittent contact with lubricants, solvents, fuels, oils, and other chemicals. Some of the primary usages of this material include:

What Are the Advantages of Polymaker PC-PBT?

The advantages of PC-PBT are its high impact strength and temperature resistance. In fact, this material exhibits excellent impact resistance even at very low temperatures down to -40 ˚C. In general, this polymer blend, whether manufactured by Polymaker or other companies, has great chemical resistance, a property directly related to the relative percentage of PBT within the blend. In other words, the higher the percentage of PBT, the higher the chemical resistance of the composite material. PC-PBT has good processability and is easy to machine, fabricate, paint, and glue. All in all, this polymer has a good balance of mechanical and chemical properties.

What Are the Disadvantages of Polymaker PC-PBT?

The disadvantage of PC-PBT blend is that it may experience some deterioration when exposed to intense UV light and heat for longer periods. This is true whether the plastic is made by Polymaker or another company. Heat stabilizers are applied to the material to quench the radicals that form during the material's melting and molding phases and later cause damage. Moreover, even though PC-PBT has good chemical resistance, this material is not resistant to some chlorinated solvents and strong alkalis. The chemical resistance and shrinkage are better in this polymer alloy than in polycarbonate alone, but not as good as in polybutylene terephthalate alone.

PC-PBT is considered relatively non-hazardous to human health as the most severe problems it causes in most cases are moderate irritations. Its signal word, which is used to describe the short-term toxicity of a product, in this case PC-PBT, is 'Warning.' This means that the product is moderately hazardous if indigested, absorbed through the skin, or inhaled. This is equally true for Polymaker's PC-PBT and PC-PBT made by other companies. Since this material is composed of two different thermoplastics, the safety of those materials directly impacts the PC-PBT blend's safety as well. Polybutylene Terephthalate is classified as a non-dangerous substance according to the Globally Harmonized System of Classification and Labelling of Chemicals (GHS). On the other hand, some polycarbonates are considered hazardous when they come into contact with food due to the release of Bisphenol A (also referred to as BPA) during decomposition. The majority of polycarbonates are manufactured from a mixture of BPA and COCl2, but nowadays, many polycarbonates are BPA-free and inherently less toxic.

The most likely routes of exposure are skin contact, inhalation, and ingestion. In case of accidental inhalation of dust or fumes from overheating or combustion, a respiratory tract irritation might happen, so the person exposed should move to fresh air as soon as possible. Moreover, accidental ingestion of PC-PBT might be hazardous and medical help should be requested if such a thing happens. A thermal burn, which is considered a more severe injury, might happen if the person's skin comes in contact with the heated material.

Polymaker PC-PBT is considered a non-toxic polymer alloy, as is PC-PBT made by other companies. However, this material is often mixed with carbon black to improve its abrasion resistance and tensile strength, as well as to protect it from UV degradation. Carbon black is classified as a health hazard, especially when inhaled, since it can cause respiratory and cardiovascular disease, cancer, and even birth anomalies. Ingestion of carbon black is also hazardous and will probably cause severe throat irritation. Nevertheless, if even added to the PC-PBT mix, this carbon is represented in very small dosages (0.1-1.0%). Because of this, we can say that PC-PBT is a generally safe thermoplastic alloy.

This article covered useful information regarding one commonly used thermoplastic blend: PC-PBT. This material is generally considered non-hazardous to human health, but it becomes a moderate irritant if other materials are added to the blend, such as carbon black. The PC-PBT polymer alloy has high impact strength, heat resistance, and chemical resistance, but it might deteriorate when exposed to intense UV light for longer periods.

The content appearing on this webpage is for informational purposes only. Xometry makes no representation or warranty of any kind, be it expressed or implied, as to the accuracy, completeness, or validity of the information. Any performance parameters, geometric tolerances, specific design features, quality and types of materials, or processes should not be inferred to represent what will be delivered by third-party suppliers or manufacturers through Xometry's network. Buyers seeking quotes for parts are responsible for defining the specific requirements for those parts. Please refer to our terms and conditions for more information.

Gracija Nikolovska
Gracija Nikolovska is a recent graduate from the Faculty of Computer Science and Engineering in Skopje, North Macedonia. She is currently working as a Data Scientist in a start-up company located in Skopje. Moreover, she is an active member of the Rotaract Club Center Skopje, which enables her to help the community and create a better world, one step at a time. One of Gracija’s main interests has always been writing, thus she has experience in various writing niches and styles, from technical to creative. Gracija is the author of the publication “Importance of e-governance and its development in European countries and in the Republic of North Macedonia” and is currently working on a research paper for the diagnosis and analysis of dementia-related illnesses.