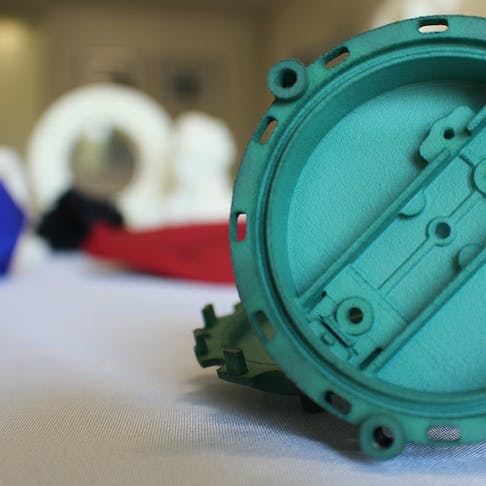 When designing parts for 3D printing, it’s important to find the best software for 3D printing that allows for seamless CAD modeling as well as pre-manufacturing optimizations.

3D printing has become an essential technology for creators and engineers working across all industries. When designing parts for 3D printing, it’s important to find the best software for 3D printing that allows for seamless CAD modeling as well as pre-manufacturing optimizations. There are many factors that need to be accounted for such as whether the software is best suited for hobbyists or professional engineers, and different applications. Listed below are some of the best software packages on the market that cover every use case and price point.

Before reviewing the available software, it's important to first clarify some modeling techniques for 3D printing.

Solidworks is parametric CAD software and is widely used for mechanical design. Solidworks has all the standard features typically found on any high modeling software. In addition to its powerful set of modeling options, Solidworks offers some features that make it a strong contender for the best 3D printing software.

Solidworks has a range of tools for preparing a part for 3D printing through its “Print 3D” feature. Some of these options are listed below.

Fusion 360 is a cloud-based, all-in-one design, simulation, and manufacturing CAD solution. Its cloud-based nature makes it ideal for collaborative design efforts. It also has a wide range of features such as simulation, generative design, and CAM. Fusion 360 is also much cheaper than its competitors. The downside is that its more advanced simulation features require cloud credits to run. These credits must be purchased separately from the subscription. Nonetheless, Fusion 360 is the best 3D printing software for constrained budgets.

Fusion 360 has built-in additive manufacturing features that allow you to optimize parts for 3D printing. It has a wide range of features, some of which are listed below. Do note that the 3D printing features set is primarily intended for FDM and SLA. However, Fusion 360 gets regular updates with new functionality.

Inventor is Autodesk's answer to Solidworks and has all the features found in most professional CAD programs. Inventor is excellent for mechanical design and in some aspects is a better overall modeling software than Solidworks. Inventor, however, has a very limited 3D printing tool package. Nevertheless, its robust modeling tools place it among the best 3D printing software for modeling and design.

Inventor does not have many 3D printing features. You get just the bare minimum print-optimization features.

Creo is owned by the same parent company as Solidworks. It is an extremely capable design package but has a steeper learning curve than Solidworks. In addition to this, it has a wide range of modeling features that allow you to create complex parts with less effort than Solidworks. Creo also has many useful features that give it the best-in-class assembly functionality. Understand, however, that Creo is a premium software package and therefore has a higher price point than its competitors. Overall, Creo is a highly capable software, and if cost is not an issue, it is the best 3D printing software.

Catia is owned by Dassault Systemes, the same company that makes Solidworks. Catia is a premium tool used widely in the automotive and aerospace industries. It is well known for its robust surface modeling tools. Catia has a steep learning curve and is not a lightweight software package. Due to its premium nature, it is extremely expensive.

The above-listed programs are extremely powerful and, in general, are the best softwares for 3D printing. However, their price points are sometimes too high to justify. If you feel this is the case there are various free CAD applications that can help to make design for 3D printing more accessible.

In addition to all the internal features of the software mentioned above, many 3rd-party tools can bridge the gaps that the major CAD packages aren’t made for. Some of the more popular ones are listed below.

To pair popular CAD modeling programs with instant manufacturing quotes within your design workspace, check out the Xometry add-ins for Fusion 360, Inventor, and SOLIDWORKS.